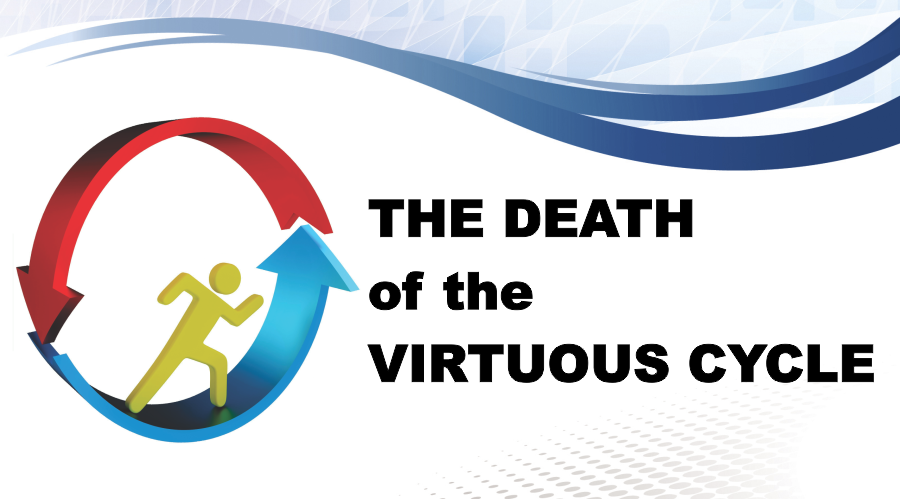 Despite many promises, there has been no sustainable economic recovery. The United States, and the developed world for that matter, have made repetitive attempts over the last 16 years to return economic growth to the pace of years long past. These nations are stuck in a cycle in which hopes for economic “escape velocity” get crushed by economic recession and asset price collapse. Following each failure is an increasingly anemic pattern of economic growth accompanied by rising mountains of debt, which ultimately lead to another failure. The perpetual excuse from the central bankers is that not enough was done to foster “lift-off”. In their view, lower interest rates, more fiscal spending and additional quantitative easing will eventually provide the needed spark that will cause the economic engine to fire on all cylinders. In the profound words of Mark Twain:

“It ain’t what you don’t know that gets you into trouble. It’s what you know for sure that just ain’t so.”

What follows in this article is evidence that current economic policy is not simply flawed in its logic and application but actually destructive. As should be evident to all by now, these experimental monetary and fiscal policies provide short term economic relief but only serve to exaggerate the problems they claim to solve. The elegant Virtuous Cycle that propelled western economies to prosperity has been quietly dismantled and replaced with an unproductive imitation. This new, Un-Virtuous Cycle euthanizes discipline and prudence in exchange for the immediate gratification of debt-fueled consumption.

One of the primary differentiating characteristics between rich and poor countries is the presence or absence of physical capital in the form of abundant sophisticated machinery and equipment. These productive assets are accumulated through savings (individual or institutional) which is converted to investment in physical capital. In the natural order, there is a sequence of events properly characterized as The Virtuous Cycle (illustrated below). It is an identity associated with sustainable productive output and growth.

Saving, or simply the discipline of consuming less than one earns, is a prerequisite for capital accumulation and the chief requirement in the Virtuous Cycle. The amount of saving determines how much investment will take place. Investment in new property, plant and equipment – better tools – fuels new and improved forms of production and leads to increased productivity and enhanced income. Higher incomes increase consumption and produce higher levels of savings, so economic prosperity continually grows. This cycle enables us to produce things of greater complexity than we otherwise could, and thus advance productivity, income and prosperity.
It is logical therefore that government and central bank policies should focus on promoting a healthy savings rate. However, over the last several decades we have seen the exact opposite. Central bank policy dismembers the Virtuous Cycle by punishing savers.

The impact of misguided economic policy is best understood through an evaluation of the two key components of economic growth.

1.) Demographics – the size of the working population
2.) Productivity – the amount of goods and services that can be produced in a unit of time

The working age population in the United States and most developed nations has become stagnant with the recent on-set of the baby boomers retiring. There is little a country can do to influence this variable outside of a dramatic relaxation of immigration policies which clearly runs counter to the current trend. Productivity, on the other hand, is more readily influenced by policy. Economic policy however, has incentivized a preference for consumption fueled by debt instead of saving which feeds and encourages productivity. Productivity growth is experiencing a multi-year decline as a direct result of these policy errors. As demographic and productivity trends worsen, it should be no surprise that economic growth remains anemic and the outlook will deteriorate further.

Despite the fact that in the long-run it is the primary determinant of a country’s future standard of living and affluence, the importance of productivity is not well understood by many outside the economics profession. As a clinical economic measure, productivity tells us how much an individual is able to produce in one hour of labor. If productivity is growing, then workers are incrementally able to produce more in an hour of work than they were previously. Although productivity can improve for a variety of reasons, it generally occurs because the tools employed make workers more efficient. While this fact may seem counter-intuitive given how much technological advancement there appears to have been, Total Factor Productivity and Labor Productivity data clearly point this out. Further supporting this analytical evidence is the consistently poor rate of economic growth, stagnant wage levels and the widening gap of wealth disparity.

Why is Productivity Falling?

The question of why U.S. productivity growth is so weak has been a topic of much debate. Explanations include employer and worker behavior patterns, the influence of a rising service sector economy and the most commonly cited excuse, measurement error. The disparity of explanations implies that most economists do not have a sound diagnosis for this “economic mystery” as Neil Irwin of The New York Times recently called it. One thing is certain to economists – to the extent that productivity is in fact weak and even potentially in decline, a continuation of this trend will have important implications for U.S. and developed world economic growth and, of course, asset prices whose returns are predicated on growth.

The solution to the mystery is straight-forward. Rising productivity depends upon the perpetuation of evolving complex production which hinges upon saving, otherwise known as consumption deferred. The accumulation of, and refinements to, physical capital through savings and investment provides the cornerstone for the advancement of labor and technology. In other words, productivity requires savings to feed the Virtuous Cycle.

That is, simply enough, the answer to this great economic mystery.

Since the financial crisis, a growing number of people are beginning to question the foundation upon which our economic prosperity rests. Our ability and willingness to transact does not appear to have changed but we seem to harbor more doubts. Stagnant growth and incomes aggravate this view. Inflation is reported as worryingly low but the cost of many high expense items such as healthcare, tuition and rents are rising significantly faster than wages. A dwindling middle class is most acutely suffering the consequences resulting from this squeeze.

Maybe the success of Bernie Sanders and Donald Trump are reflective of the erosion in confidence and trust. Perhaps current generations have realized they are not likely to be wealthier than their parents. Certainly the secular decline in our economic and productivity growth offers clues. Whatever the reasons, the system on which our affluence was built has been quietly dismantled. The doubts and frustrations reflected in all various forms by the general population are among its manifestations. Finding a culprit is also part of the problem because it appears no one can quite put their finger on how we got here. Equity and housing market bubbles are often-cited villains but those and other financial irregularities are the symptoms not the causes.

In a world where governments and central banks of the most affluent countries are manipulating interest rates to zero or even negative yields, the Virtuous Cycle, which depends upon saving and investment, is conspicuously neglected. In its place, the natural order of economic output has been rearranged for political expediency and at times as a reaction to numerous financial crises. A durable, time-tested model of prosperity, Savings-Investment-Production-Income, has been hi-jacked by a model focused solely on consumption, requiring ever increasing levels of debt to grow. It is an impatient, undisciplined model. Not only is such a model unsustainable, it is destructive.

“When the return on savings becomes negative, one of three things happens: Households sharply reduce their saving or they shift their saving abroad (which we call capital flight) or they accumulate their saving in unproductive assets, such as gold. One way or another, the financial environment for saving is an important factor in mobilizing resources for capital formation and in channeling them from households, via financial intermediaries, to investing firms.”

To paraphrase their point: When the financial environment discourages savings, the investment and production components of the virtuous cycle suffer which also negatively affects productivity and income. That is precisely what we are seeing.

Some may argue that the recent rise in the national savings rate invalidates this perspective. On the contrary, policies that incentivize consumption over savings have been in effect for decades. It is myopic to observe the savings rate over the last few months in an effort to invalidate what is best described as a secular, policy-driven change. The cumulative effects of these policies are quietly corrosive. The savings rate (expressed as a percentage of disposable income) as shown below, averaged 8.9% from 1976 to 1996. Over the most recent 20 years the average is 4.9%. The subordination of saving to consumption was born in earnest in 1971 when President Nixon closed the gold window and eliminated any form of discipline imposed on the value of our currency. It was further advanced in the Greenspan, Bernanke, and Yellen eras at the Federal Reserve through so-called “pre-emptive” monetary policy and more recently quantitative easing. Those efforts allowed citizens and lawmakers to shirk their fiscal responsibilities and as a result, the size of the national debt is now seen as a major security risk.

Further proof of this behavior can be seen in the record low yields, and rash of negative yields in the global bond markets. As evidenced by the bond yields in the table below, the incentive to save and fuel the Virtuous Cycle is nil. The organic economic structure that made western economies uniquely successful and prosperous has been altered. The virtues of discipline, patience and work ethic have been mortgaged away, traded in for quick growth schemes that yield far less than promised. The Virtuous Cycle of savings, investment, production and income which delivered unparalleled prosperity and opportunity for centuries has been tossed aside by those charged with shepherding this durable but fragile gift.

The nation’s economic illness and her citizens’ growing intolerance is testimony. The developmental effects of this economic subversion has taken decades to emerge. The economy is sick but leaders refuse to acknowledge it, offering only weak reassurances because the implications are deeply troubling. The fact that the Fed and other central bankers were blindsided by asset bubbles and have so wrongly predicted economic activity highlights their lack of understanding of the principles of the Virtuous Cycle.

Unfortunately, ignoring or not understanding the facts does not change them, and if repairable at this late stage, fixing the problem will be very painful. At the same time, and even more importantly, repairing America’s economic foundation first requires proper diagnosis and understanding of the cause as has been presented here.