By Josh Zumbrun at The Wall Street Journal

Older Americans are burdened with unprecedented debt loads as more and more baby boomers enter what are meant to be their retirement years owing far more on their houses, cars and even college loans than previous generations.

The average 65-year-old borrower has 47% more mortgage debt and 29% more auto debt than 65-year-olds had in 2003, after adjusting for inflation, according to data from the Federal Reserve Bank of New York released Friday.

Just over a decade ago, student debt was unheard-of among 65-year-olds. Today it is a growing debt category, though it remains smaller for them than autos, credit cards and mortgages. On top of that, there are far more people in this age group than a decade ago.

The result: The composition of U.S. household debt is vastly different than it was before the financial crisis, when many younger households took on large debts they could no longer afford when the bottom fell out of the economy.

Older borrowers historically have been less likely to default on loans and typically have been successful at shrinking their debt balances. But greater borrowing among this age group could become alarming if evidence mounted that large numbers of people were entering retirement with debts they couldn’t manage. So far, that doesn’t appear to be the case. Most of the households with debt also have higher credit scores and more assets than in the past.

“Retirement-aged consumers’ repayment has shown little sign of developing weakness as their balances have grown,” according to Ms. Brown. 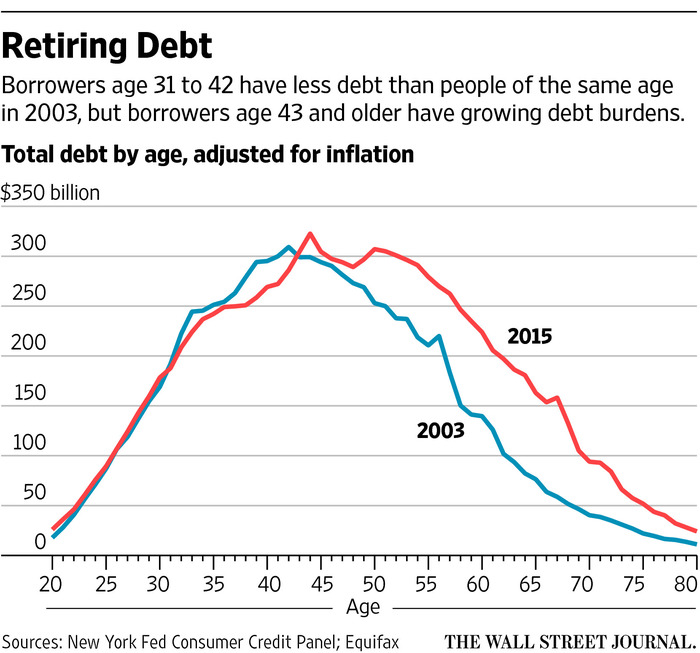 Still, the trend could become more worrisome in the future as an increasing number of people will be retiring without pension plans and with limited assets in their 401(k)s, said Alicia Munnell, the director of the Center for Retirement Research at Boston College.

“I find the increase alarming,” Ms. Munnell said, “if your only monthly income is from Social Security, you really want to get monthly expenditures down and have as little debt as possible.”

The data were released in conjunction with the New York Fed’s quarterly report on household debt, which aggregates millions of credit reports from the credit-rating firmEquifax. The report was launched in 2010 to track the changing debt behaviors of U.S. households after the financial crisis.

For the past two years, household debts have been slowly rising, although they remain well below where they were in 2008. That trend continued in the final quarter of 2015, with overall household indebtedness rising by $51 billion to $12.1 trillion. Auto loans, student loans and credit card balances all increased while mortgage balances were little changed.

An important barometer of household financial health is the percentage of this debt that is in some stage of delinquency, and that percentage has been steadily dropping. Only 2.2% of mortgage debt was in delinquency, the lowest since early 2007. Credit-card delinquencies also declined, while auto-loan and student-loan delinquencies were unchanged.

“The household sector looks much better positioned today than in 2008 to absorb shocks and continue to contribute to the economic expansion,” said New York Fed PresidentWilliam Dudley.

Part of the yearslong improvement in credit delinquencies owes to the fact that older borrowers hold a growing share of the debt. Not only were borrowers with the best financial situation able to maintain their debt during the financial crisis, but they have also had an easier time taking on new debts in recent years as credit standards have tightened.

This shift for young borrowers could have “consequences in terms of both foregone economic growth and young consumers’ welfare,” said Ms. Brown.

Source: People Over 50 Carrying More Debt Than in the Past – the Wall Street Journal