Yesterday we looked at the correlation of auto sales to stock prices and saw that it is sending a warning that may be similar to the one that it began sending in 2006. The economy appears to be slowing down, but investors are ignoring the signs.  That proved disastrous the last time it happened.

But there’s more to the story. When we delve into the data just a bit more, the picture is even worse than it looks at first glance. As I touched on in the last post, light vehicle sales were extremely weak in December, and are now down year over year.  Looking at the longer term auto sales have been at an apparent peak level now for nearly a year. The January plunge may be a signal that demand is exhausted.  A major consumer retrenchment could be just ahead. 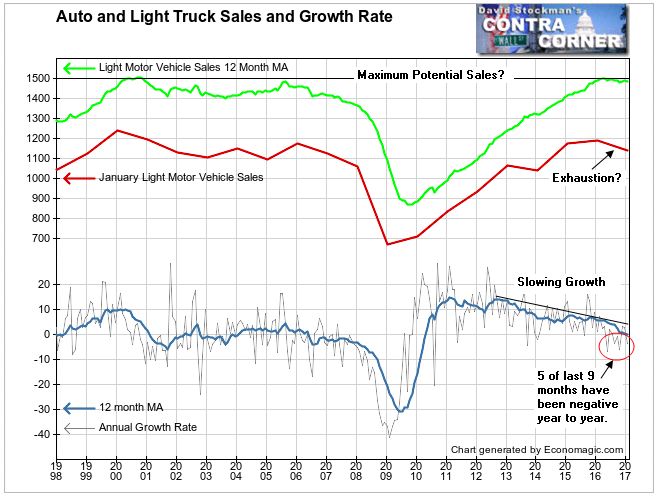 We know that over the past 18 years real household incomes have stagnated, but car prices have kept rising. Only home equity extraction and suppression of interest rates have allowed car and light truck sales to rise to the record levels reached at the top of the tech bubble in 2000. Sales were then only able to persist at peak levels for about 6 months.  The next peak at the top of the housing bubble was very short lived. Sales began to weaken as soon as the housing bubble stalled in 2006.

In the current recovery, auto sales have been helped by record low financing, record stock prices, and again, more home equity extraction at record home price levels. In spite of that, sales hit a wall about a year ago. The continued stimulus of near zero interest rates  has not helped.

The 12 month moving average of the annual growth rate has now dropped to zero. 5 of the last 9 months have seen year to year declines. The November to December drop was the larger than any December decline in the past 10 years.  Every sign suggests that car sales have reached their maximum potential and will undergo significant retrenchment. If that’s true of the auto industry, then the US economy as a whole is likely to contract as well.

Sales hung around near the highs from 2000 to 2005 because of the housing bubble and falling interest rates. That won’t be repeated today. Even if mortgage rates rise no further, housing inflation is likely to slow dramatically from here because affordability is stretched to the hilt at current prices. That means less equity withdrawal to support car sales.  There’s also no basis to believe that there will be sufficient wage growth to support an increase in sales. The secular trends in household income show no sign of reversing, and there’s no rationale for expecting that they will.

If you want a picture of just how badly the US economy and US households are doing, look no further than the population adjusted rate of auto sales. I’ve plotted them on the basis of average monthly sales per 1000 US persons. It’s not pretty. 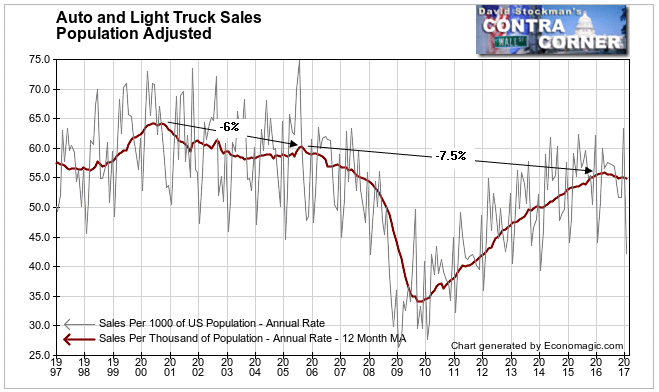 Sales set an all time record at an average monthly rate of 64 per thousand people in in 2000, at the top of the tech bubble. But even with the housing bubble as a tail wind, the best average annual sales rate was only 60 per thousand as the housing bubble was peaking in 2005.  A one month blowoff in July could not be sustained. It was an exhaustion move. The sales rate that year peaked 6% below the peak of 2000.

Then came the housing collapse and recession of 2007-2009. Sales dropped to an average monthly rate of 34 per thousand. A 7 year rebound followed with the help of ZIRP and another house price bubble. But this time, sales only made it to 56 per thousand, a drop of 7.5% from the 2005 peak, nearly 14% below 2000. Today we’re down another 1.7% from that high.

It’s clear from this data that we are going in reverse. Fewer and fewer Americans as a percentage of the population can afford a middle class lifestyle that includes the purchase of a new car.

The problem with that for the big picture is evident. If fewer people can afford to buy big ticket manufactured goods, then where will the sales come from to support these industries? If they shrink, what about the industries that serve them?

Yet investors continue to bid up the prices of stocks in the belief that they are worth more now, and will be worth more in the future. Based on what? Increasing sales? Not based on this trend. How about lower interest rates?

Don’t make me laugh. I have to agree with David Stockman, in that I think that this market is insane. But I’ve never thought of sanity as the hallmark of any market. Markets measure liquidity. Liquidity is just a fancy word for cash, money in the banks. Stocks go up when there’s too much of the stuff. They fall when money is in short supply.

That’s coming. As economic data weakens, it will eventually become obvious in the topline economic reports. It won’t be necessary to delved into the numbers beyond the headlines. The facts will simply become to obvious to ignore.  I can’t say when that will happen, but based on the craziness I see all around me in the market, in government, and in society, I have the feeling that we’re close, very close.

The truth will be obvious to everyone at that point. Confidence in the ability of central banks to continue to levitate the markets will collapse. When that happens, rapid liquidation and deleveraging will begin to destroy money faster than the central banks can print it.

The trends are bad. We’re playing with fire. Someone will get burnt. Don’t be one of them. Stay near that exit door. If you want to avoid the panic, leave now.  If you have quick reflexes, and you hang around, don’t freeze at the first sign of smoke. Get out that door first.