With the ECB set to plan on doing some QE, without much by way of reassurance that it can actually be accomplished, the central bank updated its modeled projections for QE’s success.  That part was easy for them as they always assume at the outset that QE will do what they say QE does, though it is interesting just by means of their own estimates that they don’t seem to be expecting a whole lot from it.  In terms of inflation first and foremost, all the declines were totally “unexpected” which is reflected in the staff economists’ complete missing out on oil prices (even after they had started to collapse). 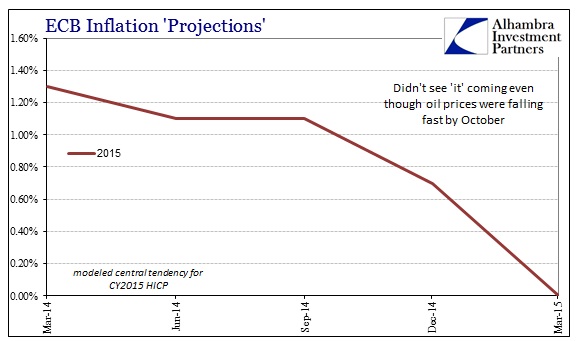 Since this is a full-year projection, the ECB is essentially saying that its QE will only keep consumer prices (the official HICP) at 0.0%.  Maybe that is some achievement in that “inflation” is already as negative as it got in 2009, but the projections for 2016 don’t really add to any QE emphasis. 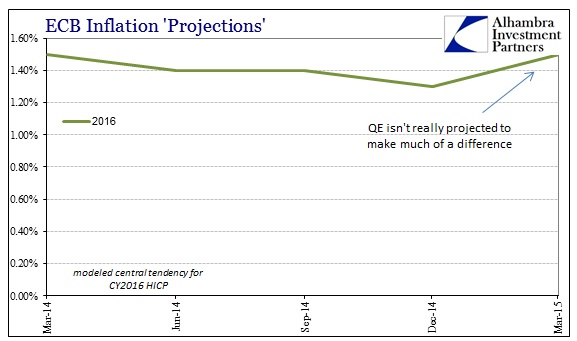 What was thought to be 1.3% “inflation” in 2016 last December is now 1.5% as of March 2015, taking into account the QE factor.  In combination, then, the ECB’s projections are pretty much standard central banking as it relates to oil prices – they see this as nothing but a temporary setback in an otherwise wonderful global growth trend.  Of course, there are no reflections upon the regularity, especially in Europe, by which this global growth trend fails to materialize, but all will be apparently well as long as we get past early 2015.

That would seem to undercut the notion of QE as an enhancement for the economic trajectory.  Their GDP estimates for 2015 were just bumped up from 1.0% to 1.5%, meaning that nominal GDP was just revised downward.  In other words, the “gain” in expected GDP comes solely from the reduced projection for “inflation.”  By simple math, then, 0.7% to 0.0% should take GDP from 1.0% to 1.7% meaning that their own calculation of nominal GDP is 0.2% worse than December.

Again, that will be seen as simply this temporary decline – whatever “it” is, and nobody seems to say how or why even a “transitory” trough has appeared and deepened so “unexpectedly.”

While they have every confidence that QE will do the trick, more recent “market” indications in funding markets are not so assured.  Eonia has fallen back again to near its worst levels of the recent ugliness from January.  That would seem to confirm and corroborate the sketch of the Swiss franc that I described yesterday.  It seems as if European banks are again preparing and acting on potential volatility or illiquidity.  That may, in fact, be due itself to QE as it is both disruptive and ultimately depressing (especially if it removes far too much collateral). 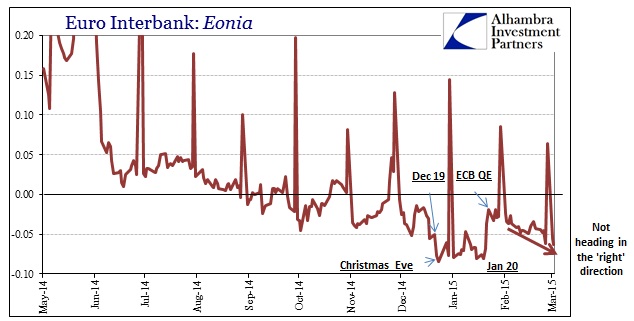 In fact, nothing the ECB has tried to this point has re-established anything like “normalizing” bank function which is pretty much paramount in this context.  If the ECB expects to reach its own projections and ultimately that 2% “inflation” target, they intend on doing so through expanding credit and financialism. 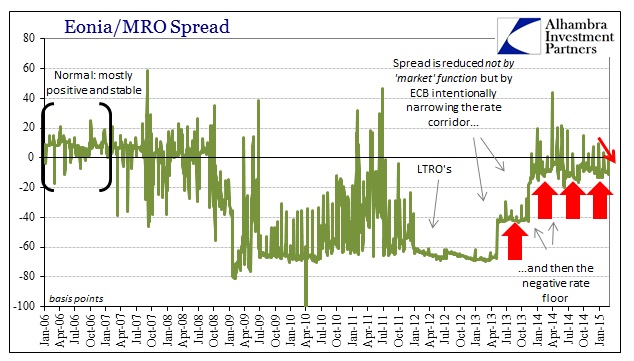 Again, nothing has worked and the most recent rates suggest nothing has changed in the “right” direction.  If whatever is taking place as a “transitory” slump is actually temporary, then why do QE at all when it doesn’t seem to have much of an impact beyond just making sure that this temporary plummet remains temporary?  And by proxy, if banking perceptions are of similar proportions, then they are surely wondering why the ECB might go all out for such little apparent or expected gain. In other words, it seems like overkill which is itself cause for concern.

I think that ultimately explains the ECB’s actions far more than anything else. They know the severity of what may be happening and are willing to take the ultimate step (only by current thinking, who knows what comes next if this all fails) not in confidence but actually exuding deep worry.  Like the first negative deposit rate measure back in June (which, once again, coincided with the drastic shift in the “dollar” and global liquidity), the ECB is dealing from an obvious position of weakness and every huge debasement they take, especially one closely after another, only confirms that.