As a result of the Fed’s balance sheet expanding to $4.5 trillion over the past 7 years, the most direct consequence has been the increase in excess reserves held at various banks to just over $2.5 trillion. This, as we have shown before using the Fed’s H.8 data, means that cash held by various commercial banks has risen proportionately, and as shown in the chart below, there has been a direct correlation between the amount of excess reserves in the system (shown by the black line) and bank cash holdings. 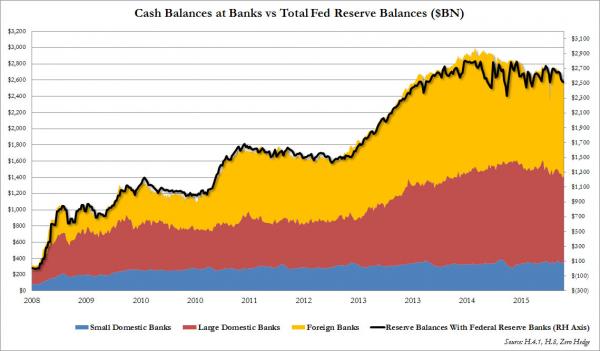 One thing that stands out in the chart above is that while $1.4 trillion of this cash can be found at domestic US banks, both large ($1.06 trillion) and small ($370 billion), a whopping $1.15 trillion remains parked at foreign banks operating in the US. This differential can be seen in the chart below. 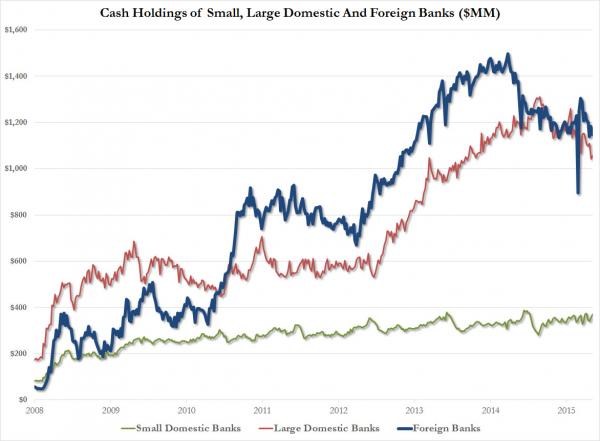 While the reasons for disproportional allocation of cash within foreign banks has been discussed over the years (“Where The Fed’s Excess Reserves Are Going: 51% Foreign Banks; 49% Domestic“), and is largely driven by the FDIC’s decision several years ago to levy a 15bps deposit insurance assessment from large US bank holding companies, the outcome is clear: nearly half of all Fed excess reserves are parked with foreign banks.

Why is this an issue?

We first explained the nuances of the “big picture” of what years ago we dubbed the world’s biggest carry trade (the Fed collected interest income on its Treasury and MBS holdings, and pays out interest payments on the amount of Excess Reserves parked with it at the IOER rate) nearly three years ago, in February 2013, just after the Fed launched its latest reserve boosting program, QE3, when we wrote “How The Fed Is Handing Over Billions In “Profits” To Foreign Banks Each Year.”

This is what we said back then: 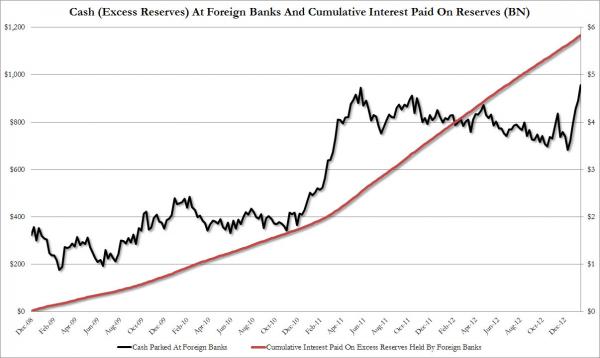 We added that “all of this, of course, ignores what happens should the Fed hike interest rates across the board, which will also mean rising the rates on IOER, once inflation finally strikes.”

Nearly three years later, inflation as measured by the Fed’s preferred CPI metric never struck, and in fact inflation expectations have kept falling as measured by the 5Y5Y, but as everyone knows, the Fed did hike rates last week (unleashing a “policy error”), in the process doubling the interest the Fed will pay on Excess Reserves from 0.25bps to 0.50bps.

Who benefits from this? Almost exclusively, the banks who continue to park their excess reserves at the Fed (whether or not they use the collateral as risk assets to corner markets like JPM did with its London Whale is irrelevant) and collect 0.5% on said cash. Nobody more so, however, than foreign banks.

First, this is what the chart above looks like if extended from our last update in February 2013 through today. 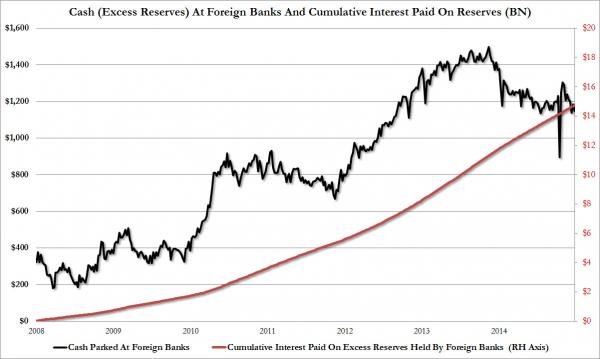 The chart above shows that between early 2013 and today, foreign banks received another $9 billion in cumulative interest payments from the Fed, a grand total which now amounts to just shy of $15 billion.

And now, with the IOER doubling to 0.50%, it means that foreign banks will collect interest from the Fed at double the pace. Indeed, assuming all else is equal such as total excess reserves parked with foreign banks remaining flat at the current $1.15 trillion level, it means that just over the next 12 months, foreign banks will pocket another $6 billion, increasing the cumulative Fed cash payment from $15 billion currently to $21 billion. 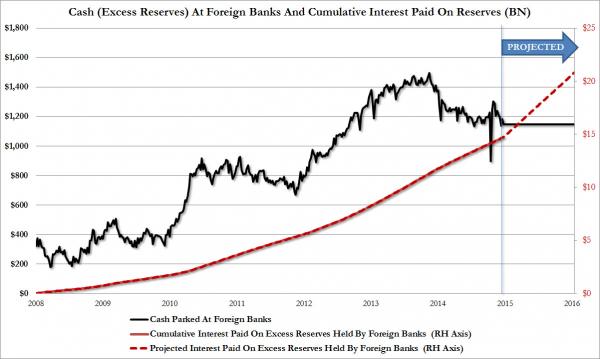 But wait there’s much more – the calculation and the chart above assumes the Fed does not hike rates in 2016; according to the latest Fed dots we know that this is untrue and that at least according to the world’s most important central planners, there will be at least another 4 rate hikes in the coming year, most likely in March, June, September and December, bringing the year end IOER to 1.50% from 0.5% currently.

This means that instead of handing over “only” $6 billion in risk-free interest to foreign banks, these same foreign banks operating on US territory with reserves parked at the Fed will receive a grand total of $11 billion in IOER interest in 2016, closing the year with $26 billion in cumulative interest receipts from the Fed.

This would look as follows: 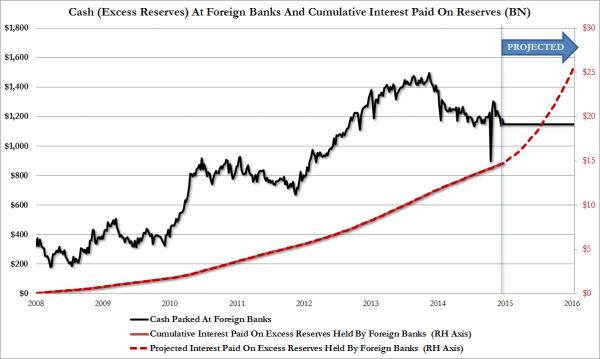 So there you have it: a riskless “profit” handout for foreign banks, subsidized by the most famous US “public” institution – the Federal Reserves – amounting to approximately $11 billion in just one year.

And since there is no plan in sight for unwinding the Fed’s gargantuan balance sheet and soaking up the trillions in excess reserves parked at both domestic and foreign banks, this handout of risk-free cash will continue indefinitely.

Nearly three years ago we closed by saying: “We can only hope someone in Congress asks Ben Bernanke … under which Fed charter it is that the Fed is more focused on generating profits (not just trillions in excess liquidity) for European banks?”

Ironically, this is taking place just as Europe’s own negative rates would, at least in theory, lead to substantial losses for European banks. Luckily, said banks also have their US exposure to boost their IOER annuity courtesy of the US “public institution” known as the Fed.

Now it is no longer Bernanke but Yellen who is in charge, and while the we doubt Congress will ask anyone anything, now that foreign central banks are set to generate over $10 billion in “profits” on the back of the US central bank which, at least in theory, is meant to serve the US public over the next 12 months, we wonder if others will ask just what was the rush to hike rates and give foreign commercial banks an unprecedented “profit” stream just as the US economy is rolling over into a manufacturing (initially) recession?

Source: The Federal Reserve Will Hand Out $11 Billion in Riskless “Profits” to Foreign Banks in 2016 – ZeroHedge