The Fed’s Serial Bubble Machine At Work: How Millennials Are Being Buried Financially

Thanks to Fed printing presses coupled with an extreme case of irrational exuberance, those over 40 years old have recovered losses from the great financial collapse.

However, Millennials Remain Mired in Wealth Gap, as Others Recover.

For households headed by someone 40 years old or younger, wealth adjusted for inflation remains 30 percent below 2007 levels on average, according to research by economists at the Federal Reserve Bank of St. Louis. Net worth for older Americans has already recouped the losses. 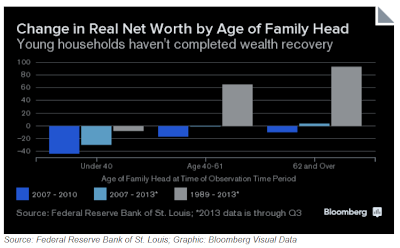 Such a generational divide has negative implications for consumer spending, which accounts for almost 70 percent of the economy. Younger households tend to spend a greater share of their incomes in furnishing new homes and buying automobiles, in contrast to their older counterparts who save more as they inch closer to retirement.

The average value of housing on young families’ balance sheets remains about 35 percent below its 2007 level, the St. Louis Fed paper estimates.

“These changes going on with individual balance sheets could have impacts on the whole economy,” said William Emmons, an economist at the St. Louis Fed who co-authored the study published in February with Bryan Noeth. “Maybe this is one of the reasons that it’s been so hard to understand this weak recovery. Not enough people are looking at these.”

There is nothing hard to understand about the weak recovery. I predicted this outcome years ago. On May 22, 2008 I wrote “Boomers will be competing with their children and grandchildren for jobs that in many cases do not pay living wages.”

Many young kids are mired in student debt, working on jobs that should not even require a degree. Those kids postpone household formation, and in record numbers still live with their parents. Millennials had little to no assets for Bernanke to inflate in price.

And so here we are.

For further analysis, please see the Fed report Housing Crash Continues to Overshadow Young Families’ Balance Sheets. Here are a couple of charts from the report, followed by my comments. 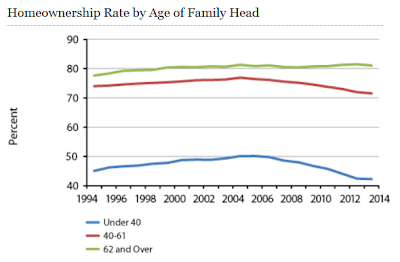 For all age demographics, home ownership rates peaked right as the bubble burst. However the steepest percentage increases in ownership at the time of the collapse was those under 40.

Home prices have recovered much of their losses in many areas, but that has not done anything to alleviate the massive student loan problem. Worse yet, the home price recovery has a negative benefit for those still trapped living at home with their parents as well as those with a job but still mired in student debt, hoping at some point to buy.

Until that dynamic changes, household formation will remain weak.