Australia’s housing bubble is back in full swing. Prices rose almost 11 percent over the past year to near-record levels.  Prices in Sydney rose 15 percent.

Household debt as a percent of income surpassed the previous record.

Australian household debt has hit a record 177 per cent of annual disposable income while housing valuations are “flashing red”, according to Barclay’s chief economist, Kieran Davies.

“House prices now equate to 4.3 times annual income and 28 times annual rent, both within a fraction of their historic highs,” Mr Davies said. 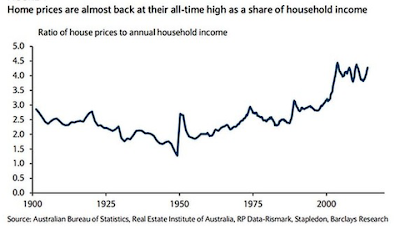 Household Debt as Percent of Income 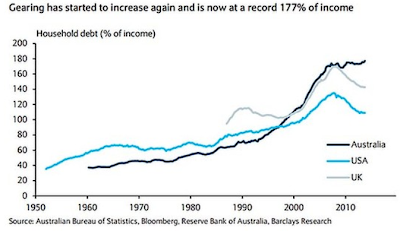 In March RBA governor Glenn Stevens warned “we need to be alert to the possibility that the past year of strong rises in dwelling prices leads people to assume that this is the norm”.

“Were such an assumption to lead to increasing speculative activity, accompanied by a renewed increase in household leverage with all the associated risks to the housing market … that would be unwelcome,” Mr Stevens said.

That home prices and debt-to-income are back up at record levels is a sign that speculation is already back in full swing already.

Is there any central bank governor anywhere that can spot speculative bubbles before they burst? Apparently not.