Overnight, Credit Suisse – which itself has been a casualty of the global slowdown which has hit European banks hard in recent months – became the latest bank to join Goldman, JPM and increasingly more banks in predicting that 2016 will be a year in which investors will want to rotate out of equities. Specifically, the second largest Swiss bank said that it is “we reduce our equity weightings to our most cautious strategic stance since 2008 and take our mid-2016 S&P 500 target down to 2,150, the same as our end-2016 target.”

Here are the five reasons why CS just looked at the mounting wall of worry… and began to worry.

For the “we prefer tables” crowd, here are the negative and positive factors that influence CS’ outlook. 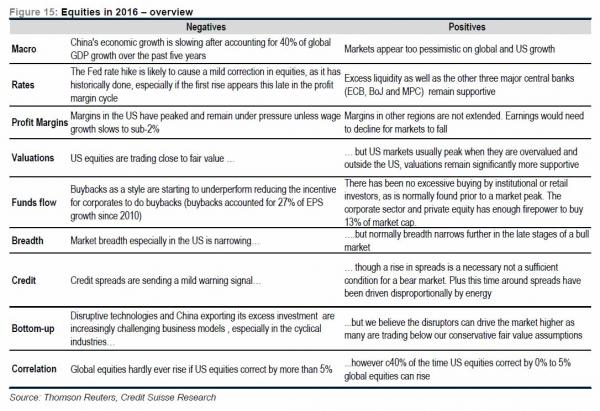 Just to cover its hedges in a manipulated, centrally-planned global market in which global central banks have been the marginal price setter fo years, Credit Suisse notes that while it is the least bullish on US equities since 2008, it is “still overweight” on global stocks: “We revise down our equity weightings to a small overweight, being the
most cautious on equities in our annual outlook since  December 2008 (we
turned tactically cautious in January 2013 and June 2011).”

Surely all of this is just more ammo for the Fed’s “rate hike at all costs” argument.

Source: The Five Reasons Why Credit Suisse Just Turned The Most Bearish On Stocks Since 2008 – ZeroHedge