The “Fracklog Trigger”: Why 500,000 Barrels Of Shale Crude Could Hit The Market At Any Moment

Yesterday, when reading through Pioneer’s results we stumbled on something unexpected: not only was the company pumping more than its had previously guided, but announced it was waiting for $50/barrel to reactivate five to ten horizontal drilling rigs. To wit:

Whether this is due to aggressive hedging (as also explained previously) or simply because Pioneer and its peer companies have dramatically reduced their all-in costs of production is unclear, but what is clear is that with every dollar that the price of oil rises, the risk of US shale coming back to market in an aggressive fahion become ever greater.

Today, we turn our attention to another potentially disruptive source of oil supply, one also covered previously, namely Drilled, Uncompleted Wells, or DUCs.

As Bloomberg writes, drilled, uncompleted wells could return 500,000 barrels a day back to the market, according to Richard Westerdale, a director at the U.S. State Department’s Bureau of Energy Resources. The inventory of wells is known as the fracklog.

“Once we start approaching $45 and above, the risk of a much sharper pullback starts to increase as a lot of shale becomes profitable again,” Angus Nicholson, an analyst at IG in Melbourne, said by phone. “It’ll bring more supply back into the market. This happened last year when a swathe of output hit the market after a price gain and subsequently led to oil dropping to record lows.”

As Bloomberg reminds us, oil has rebounded amid speculation a global glut will ease after a decline in U.S. production this year trimmed more than 280,000 barrels a day of daily supply. However, that may not last long, especially if oil prices continue rising: as noted above, Pioneer Natural Resources Co. has expanded its 2016 production growth target as wells pump more than expected. Others such as EOG Resources, the largest landholder in the Eagle Ford shale formation in Texas, said it will wait for the market to rebalance before boosting output. It may not wait much longer.

Meanwhile, the above brings up a point we just presented with a previous post in which Morgan Stanley asked if algos will succeed in pushing oil back to $60. 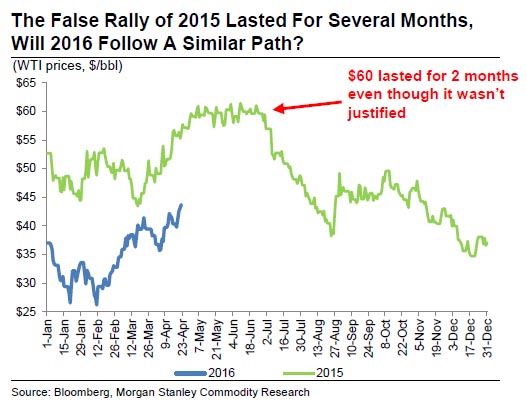 Last year, US oil output surged to a weekly record in June as drillers returned rigs to service after West Texas Intermediate climbed above $60 a barrel. The rebound was short-lived, with prices slipping almost 40 percent to end the year at $37.04 as the nation’s stockpiles swelled.

The question is when will history repeat itself: since then output fell below 9 million barrels a day this month to the lowest since October 2014. Drillers have cut more than 190 rigs from service this year to the least amount of active machines since 2009, according to data from Baker Hughes Inc.

The question: how long until oil prices are high enough for production to once again triumphantly return? Becauseeveryone knows what oil did last summer, and more importantly, last fall and winter.

Source: The “Fracklog Trigger”: Why 500,000 Barrels of Shale Crude Could Hit the Market at Any Moment – ZeroHedge