Interest rates are now hitting record-lows while stocks hit record-highs; this has never happened before. Nor should it ever happen.

You see, changes in interest rates are typically a very good economic indicator, forecasting future growth and inflation. In recently plunging to new, all-time lows, they have taken out the lows set during the Great Depression. In other words, the bond market is saying the prospects for the economy are not very good and possibly very dire. 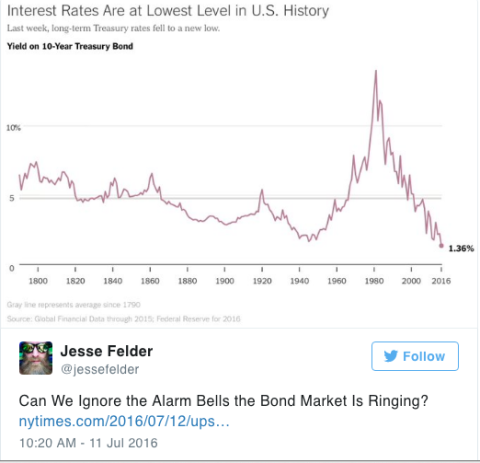 On the other hand, you have the stock market plowing to new highs. On its own, this doesn’t tell us much. Valuations, however, tell us much about the current expectations of financial market participants. And the median stock has never been more highly valued than it is today. In other words, the stock market is more euphoric about future growth ever before. 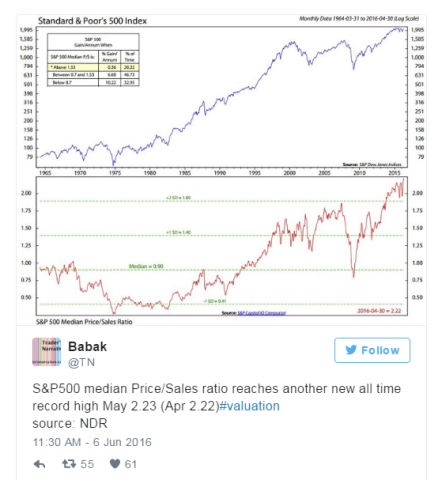 So bonds are pricing in Armageddon while stocks are pricing in a new Golden Age for the American economy. It’s simply the greatest dichotomy that we have ever seen before in the financial markets.

Some will argue there are strange goings on that are distorting the messages from these two asset classes and I can’t disagree. Central banks have dramatically reduced the supply of bonds, inevitably pushing up prices and lowering interest rates. Investors, desperate for yield in such circumstances, have increasingly turned to stocks for income.

Does this simple lack of supply diminish the value in the economic warning coming from the bond market? Do record-low interest rates justify record-high valuations in equities?

These are probably the most important questions for investors to answer right now. Certainly, central banks have explicitly crafted this situation. They have made no bones about the fact they have done all of this to try to goose the economy by creating a wealth effect.

And as much as I dislike rationalizing an indicator, I think the lack of supply probably does mean the bond market could be somewhat too pessimistic about the future growth of the economy and inflation. However, that also means that investors using interest rates to justify high equity valuations have also been overly optimistic, possibly in manic fashion. Even the Fed has recently warned as much.

It’s very likely, in my view, that the Fed has thus engineered bubbles in both bonds and stocks at the same time (along with a few other asset classes). For this reason, the economic message they each send must be considered in that light. Record-low bond yields and record-high equity valuations are probably a better indicator of the desperate reach for yield on the part of investors today than any cohesive economic message we can glean from them in concert.

Source: We Are Witnessing The Greatest Dichotomy In The History Of Financial Markets