The Hidden European Banking Crisis That Could Destroy The US Markets

The European banking collapse paused in October with a minor uptick in total deposits. In addition there was a massive, mysterious revision of the figures from earlier this year. In the data released in late October, September deposits had plunged below the 2015 low, suggesting that a crash had begun. The data just released erased that plunge and showed total deposits still above the 2015 low. I could find no explanation from the ECB.

That does not change the most important fact. That is that deposits are still downtrending while the ECB continues to inject massive amounts of new money into the banks. The ECB has added hundreds of billions of Euros to bank deposit accounts over the period in which total deposits have been declining on balance. It is an incredible display of money destruction that has been absolutely ignored in the mainstream media.

US Treasury market prices have followed European bank deposit levels for years. Europeans are always big buyers of Treasuries. Some of the money that flowed into the US banking system via European purchases of Treasuries also made its way into the stock market.

The evidence suggests that European banks and dealers are no longer buying Treasuries on balance. Instead they are now liquidating Treasuries to raise desperately needed cash. Prices of US Treasuries have been declining since European bank deposits began to collapse in July. A continuation of this trend would shrink liquidity around the world and eventually have negative implications for US stock prices.

Stocks have managed to buck the trend since the election, partly because the media and Wall Street have concocted a narrative that says that rising bond yields signal inflation and a stronger economy. That gives them a rationale to pile on the selling of bonds, and to use available cash to buy stocks instead.

This is a false narrative. The selling of Treasuries has nothing to do with future inflation or strengthening of the US economy. It is purely about the pressure on the European banks to raise cash by selling Treasuries. It is therefore only a matter of time before money destruction in Europe caps the current rally in stocks.

Last month the ECB showed that European bank deposits collapsed in September to well below the September 2015 level and were down by €339 billion since July. If the deposits chart was a price chart, it would have been a breakdown from a major support level from a top pattern that took a year to build. That would portend a major decline ahead. 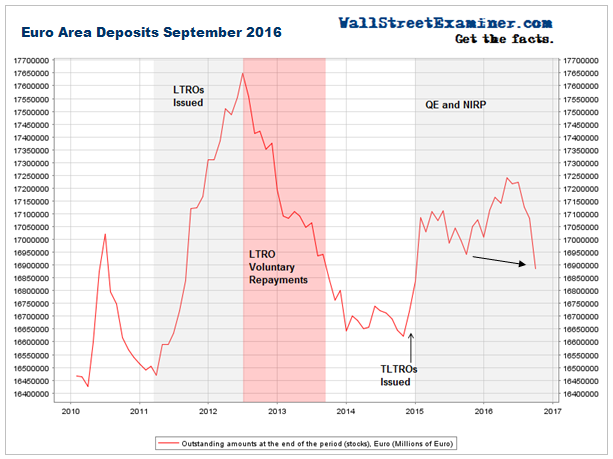 But this week the ECB released banking data for October and, lo and behold, the past data changed. The September 2015 low was lower and the September 2016 low was higher than in the last monthly release. No breakdown! The €339 billion decline has morphed into a €259 billion decline. €80 billion magically reappeared. It’s the ECB version of painting the tape. 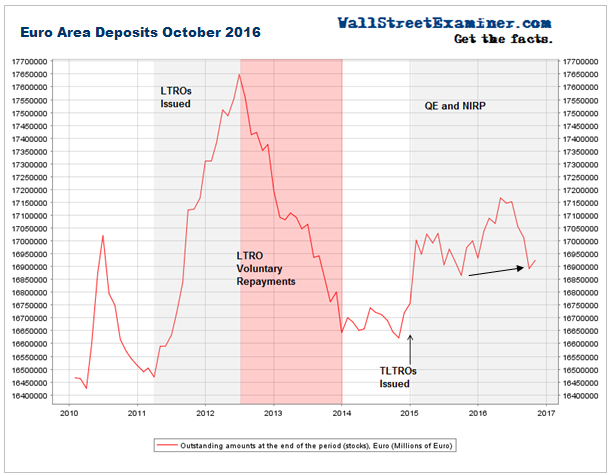 Meanwhile, in addition to the big downward “revision,” October had an uptick of €31 billion, leaving total deposits down by “only” €245 billion since April.

€800 Billion Has Disappeared – Where Did It Go?

Since deposits in Europe’s banks peaked in April, the ECB has printed €552 billion in its QE program. Total deposits should be up by at least that amount simply because of the mechanics of QE. When the ECB buys securities, it debits the selling dealer’s account at the ECB. That cash then flows into the banks as the dealer trades with other parties.

New ECB money (QE) is also transmitted into the banks when governments spend the funds which they raised in debt sales.  The ECB had provided the cash for buying those government bonds when it made previous purchases of government bonds and other securities from dealers. Again, it did that with the new money it created by fiat and paid to the banks.

With those transmission mechanisms, bank deposits should increase euro for euro with the amount of ECB purchases.  That has not happened. Instead, the amount of money in the banks has contracted.

I cannot emphasize enough just how important a fact that is.  The ECB’s program of massive bond purchases isn’t even sufficient to keep the system from contracting. The central bank is performing a massive rescue operation in the guise of economic stimulus. That operation is designed to keep the European banking system from collapsing. It isn’t working.

€245 billion in net deposits have disappeared. Given that they should have increased by the €552 billion that the ECB deposited with dealers, it means that €798 billion in ECB printed money has been incinerated since April.

Some of it has fled to the US where deposits are still growing steadily, and stock prices are still rising. But some of the ECB money has been extinguished. Money is extinguished when depositors use their cash deposits to pay off loans. Both the bank’s asset, which is the loan, and the liability, which is the deposit, disappear when the borrower pays off the loan. Bye bye money.

The crisis in the European banking system looks bad, but it is apparently even worse than it appears on the surface. When nearly €800 billion in printed money simply disappears from the face of the continent, that’s clear evidence of a massive banking panic.

Extending the lookback period to the inception of the ECB’s negative interest rate policy (NIRP) in September 2014, the ECB balance sheet has grown by €1.5 trillion. Bank deposits have only grown by €278 billion. Therefore,  €1.2 trillion of the €1.5 trillion that the ECB has printed and pumped into the banking system has either fled elsewhere or been extinguished.

That, ladies and gentlemen is the magical effect of NIRP and a covered up banking panic. While there’s been some talk of the problems of Deutsche Bank and Italy’s Monti de Paschi di Sienna Bank, the problem is far more widespread. Spanish and Greek bank deposits are still melting down, and there are signs of big problems in Germany too.  The Italian banking crisis is still being papered over. It’s Draghi’s Italian Job.

Europe is the world’s largest banking network under a single central bank. It is 50% bigger than the US banking system in terms of its deposit base. The shrinkage of European deposits took hold in July. The evidence of the effect of that is clear. It is in the simultaneous meltdown of the US Treasury market where yields have been surging since July.

European banks face the intractable problem of too many bad loans that are not being repaid. Meanwhile they have borrowed trillions of Euros to back their deposits. In order to service and pay off those loans they must raise cash by selling off assets.

Among their largest holdings, and certainly the most liquid, are US Treasury securities. Euro banks are selling those just to stay afloat.  Bond prices are set at the margin by trades between buyers and sellers.  The incremental selling of European banks puts downward pressure on bond prices. The opposite side of falling prices is rising yields. If the selling continues to pressure prices lower, the next step will be margin calls and forced selling.

Once that starts the system is then at risk of an uncontrolled downward spiral that affects the price of not just bonds, but stocks, and everything else that is or is not nailed down. That means real estate and probably also industrial and agricultural commodities.  Gold may also be knocked down for a while, but historically has been the first to recover in a time of crisis.

Given the size of the European banking system and the role it plays in setting the price and yield of US Treasury securities, I cannot stress enough how important this data is. That’s why I track it every month.  The job is to keep you informed so that you can stay ahead of the changes in the market that are all but certain to follow.