By James Montier at GMO.com

It seems one can hardly open a financial newspaper or read a blog these days without tripping over some academic-cum-central banker talking about the once arcane notion of the equilibrium real interest rate. Bernanke chose exactly that subject to inaugurate his blog. According to Gavyn Davies, Yellen used the term “equilibrium real interest rate” no less than 25 times in a recent speech. (I have to be honest, life is simply too short to make me want to check that count.) The word cloud drawn from the text of Yellen’s speech below does certainly suggest that number is about right. The president of the Cleveland Fed went so far as to say that the equilibrium real interest rate was the issue for policymakers today. 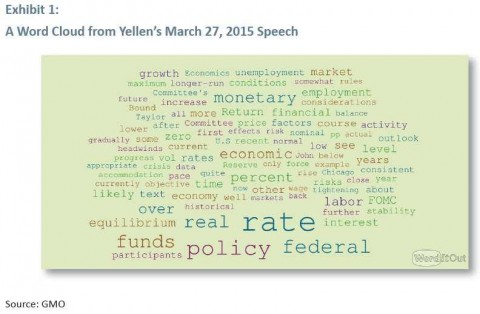 Summers and Krugman are also devotees of the concept of an equilibrium (aka natural or neutral) rate of interest. For Summers, “…the essence of secular stagnation is a chronic excess of saving over investment.” Krugman uses diagrams such as the one in Exhibit 2 to illustrate the case. In order for the “market of savings and loans” to clear, the real rate of interest must be negative, or so the argument goes. 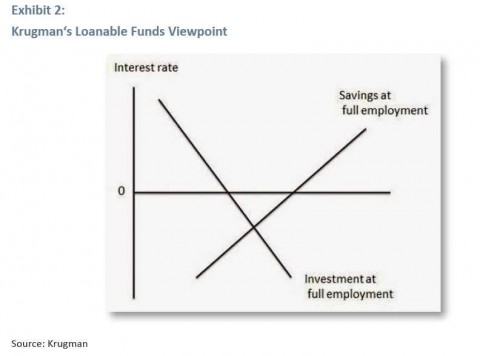 This is, of course, more evidence of the wisdom of Keynes’ insight that “Practical men, who believe themselves to be quite exempt from any intellectual influence, are usually the slaves of some defunct economist. Madmen in authority, who hear voices in the air, are distilling their frenzy from some academic scribbler of a few years back.”

Wisdom of crowds or groupthink extraordinaire?

One could take the view that so many bright individuals all coalescing around a single framework was evidence of the wisdom of crowds. However, rather than representing the power of consensus, it appears to me to be evidence of extreme groupthink – it is very telling that not one of the aforementioned luminaries has questioned the framework itself.

One of the preconditions for the wisdom of crowds to hold is that people must be independent. This clearly isn’t the case with the above coterie of economists, many of whom trained at the same university under the same teacher. As Steve Keen pointed out, “If I were describing a group of thoroughbred horses, alarm bells would already be ringing about a dangerous level of in-breeding.”

The term “groupthink” was coined by Irving Janis in 1972. In his original work, Janis cited the Vietnam War and the Bay of Pigs invasion as prime examples of the groupthink mentality. However, modern examples are all too prevalent.

Groupthink is often characterised by:

Perhaps it is just me, but these traits seem to pretty much capture the nature of mainstream economics these days.

Hunting of the Snark or chasing Will-o’-the-Wisp

I have written before on issues surrounding the invalidity of the concept of a natural real interest rate. In essence, my view is the same as Karl Marx who, in Das Kapital, Vol. III opined, “There is no such thing as a natural rate of interest.”

According to the Wicksellian perspective so beloved by Bernanke et al., the natural rate of interest is simply assumed to exist. This has disturbing parallels with perhaps the oldest joke concerning economists that I know. When I first studied the subject nigh on 30 years ago, one of my teachers told us the old hackneyed tale of the shipwrecked academics: An engineer, a chemist, and an economist were all stranded on a desert island with no implements and a can of food. The engineer rigs up a Heath Robinson-like contraption with stick levers and vine pulleys. The chemist suggests using salt water to erode the can and then heating it once it is weakened. They then turn to the economist who merely says, “Let’s assume we have a can opener!”

Wicksell himself defined the natural rate of interest as “obtained by thinking of it as the rate which would be determined by supply and demand if real capital were lent without the intervention of money.” By real capital, Wicksell is referring to machines, tools, etc. There are numerous (wonkish) reasons for thinking that this is a very suspect concept that I won’t go into now (but, as mentioned above, I have explored previously and the interested reader is referred to that essay).

I’ll content myself here by highlighting perhaps the most damning argument against the Wicksellian perspective: that it simply doesn’t fit the way the world actually works. At this point, economists often reach for the Friedmanite position – that a model shouldn’t be judged by the realism of its assumptions, but by its predictions. I’ve always found this to be a very weak defence. Yes, of course, all models are abstractions; as Joan Robinson pointed out long ago, a map on a scale of 1:1 is of no use to anyone. However, how on Earth can you rely upon any conclusion from a model that fails to capture the basic structure of the world as we know it, and furthermore abstracts away from the very issues under consideration? 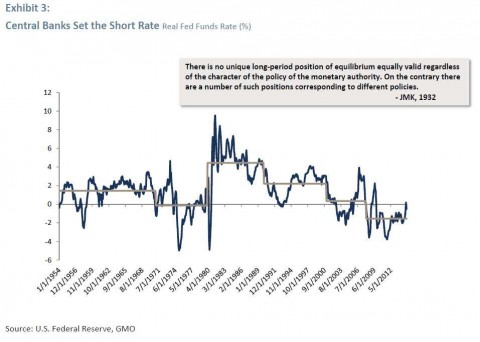 See full PDF below or click here to view in new window.