One of my pet themes over the years has been the ridiculous conventional economic definition of inflation that excludes asset prices, an absurdity which the BLS then compounds by suppressing any potential echoes of asset price inflation in the CPI, particularly with housing. It does this by giving the housing component the largest weight in the CPI at 31%, and then not counting actual house price indexes or even market rent.

Instead it uses makes up a fictitious number called Owner’s Equivalent Rent (OER), which is derived by asking homeowners what they think their house would rent for, then adjusting that using market surveys of contract rents paid by renters. The problem with using contract rents to adjust OER is that the logic is circular and becomes a self fulfilling prophecy. Residential leases typically use CPI escalators (or sometimes fixed increases at 2-3%) and do not reflect market rent–the actual price levels in the marketplace. The adjustment factor used to inflate OER is therefore CPI (or something less) rather than a measure of actual house price increases or actual rent increases in the marketplace.

House price increases over the past year have been running 5-7% depending on the measure, and lately accelerating. Rent increases have been running around 4% on average nationally, but much higher in many cities. The result of the BLS using an imputed housing cost increase rate based on CPI is growing suppression of top line CPI over time. Consequently, CPI persistently understates consumer goods and services inflation while ignoring asset inflation altogether.

Today’s release of the Producer Price Index provides a clear illustration of the ridiculous and extreme smoothing and suppression that the BLS applies to Core CPI, and which the mainstream media and economic establishment accepts as gospel. The housing component of Core CPI comprises approximately 40% of the index given removal of food and energy components. So the suppression effects of the BLS’s trick are even greater on Core CPI than total CPI.

Overlaying the index of PPI Finished Consumer Goods Less Food and Energy versus Core CPI illustrates the growing gap between a less manipulated representation of consumer goods inflation and Core CPI.  PPI also has the advantage of being released a day or two before CPI, so it gives us a heads up on where CPI “should” be. If the subsequent CPI release doesn’t reflect the PPI increase, then we know there’s an elephant in the room that will eventually drop its load on the unsuspecting crowd.

In this case the PPI proxy for Core CPI rose a whopping 0.62% month to month in June. That was on top of 0.24% in May. The annual increase is now 3%. That includes the effect of 3 months in the past year where prices actually did decline.

This brings up another of my pet themes, which is that the Fed is already WAY behind the curve in recognizing inflation. The impact this will have when the reality begins to show up in the Fed’s doubly suppressed core PCE deflator won’t be pretty. Bond investors already seem to be sniffing the reality that inflation isn’t what the official myth purveyors would have the market believe. It’s much worse. 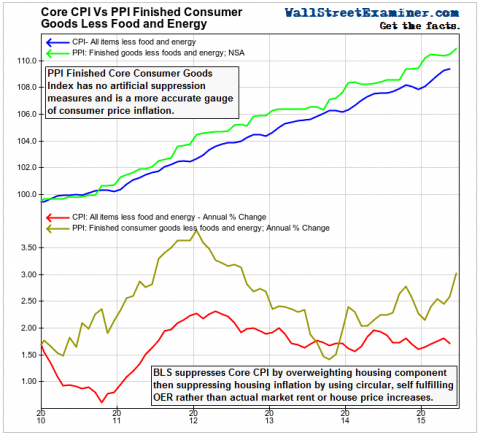 I suspect that Fed insiders are well aware of this, and that they will move sooner rather than later to engage in the charade of attempting to raise interest rates. That’s a whole ‘nother can of worms.