New home sales during June really hit the skids, posting a 8% decline from May and a 11.5% drop from last June. Also, May was revised sharply lower to 442k from 504k and April and March were revised lower by 24k. The three-month downward revision thus totaled 86k. So much for the great housing recovery euphoria that occurred this spring. It flat-out didn’t happen.

In whole numbers, the print came at a paltry 406,000 annualized rate compared to Wall Street expectations of 475,000.

The interesting thing is not simply that the Keynesian Cool-Aid drinkers who pass for Wall Street economists got it wrong again.  Actually, as can been seen clearly in the chart below from the Wall Street Journal, the June 2014 number for new home sales was exactly the same as the 400,000 number posted right after the financial crisis in the fall of 2008.

So let’s see. Between those two points the Fed’s balance sheet has exploded by 5X—- from $900 billion to $4.4 trillion. In the process the Fed caused long-term interest rates to plummet to rock-bottom sub-economic levels. It even brought more than $1 trillion of mortgaged backed securities to force mortgage rates down to stupidly low levels—-which reached a bottom of 3.3% on 30-year money about 14 months ago.

Just consider the implications. Our benighted monetary politburo decreed a “housing recovery” from the still smoldering remains of the previous bubble it had created. To that end, it forced rates on 30-year fixed rate money to levels that did not even cover the cost of the trend level inflation (2.0-2.5%) and taxes—-to say nothing of compensating for the self-evident default risks in the mortgage market. About the only thing this assault on honest free market economics actually did, however, was to offer a few million, better-off mortgage borrowers— who weren’t underwater—one last go at the “refi” windfall game.

So here we are after 68 months of ZIRP and QE madness, and new home sales are still sitting on the flat-line. There has been no sustainable impact on the new home market whatsoever. Zero. Nada. Nichts. Nothing.

Yet the Wall Street cry babies just keep demanding “lower for longer”, and the clueless Keynesian money printers who occupy the Eccles Building meekly comply. But maybe there is a reason why main street is not rushing to the builders’ model home sites— just because the Fed had tortured interest rates until they screamed for relief last spring. It might be that main street was painfully burned by the Fed’s previous exercise in housing bubbles, and wants nothing to do with the mini-bubble in home prices it has again stimulated via its agents in the Wall Street hedge funds and LBO shops who stormed into the local markets with cheap money last year. Indeed, that’s exactly what a spokesman for one local builder told the WSJ:

Builder Mattamy Homes, which sold 1,400 homes last year in five states, said sales in 2014 have so far failed to meet expectations. Mattamy’s U.S. sales in June were more than 10% less than a year earlier.

“The U.S. housing market is being held back,” Mattamy’s Chief Operating Officer Brian Johnston said before Thursday’s report. Purchasing a new home is “not as desirable as it used to be, given that so many people got burned by buying a new house” when their investment was decimated in the downturn.

So maybe its time to admit that monetary central planning has been an abysmal failure. Maybe it time to let the housing market sink or swim on its own, and to liberate the financial markets from the destructive embrace of the monetary politburo. In any event, the chart below provides compelling evidence that statist management of the financial markets and macro-economy is an exceedingly bad idea. 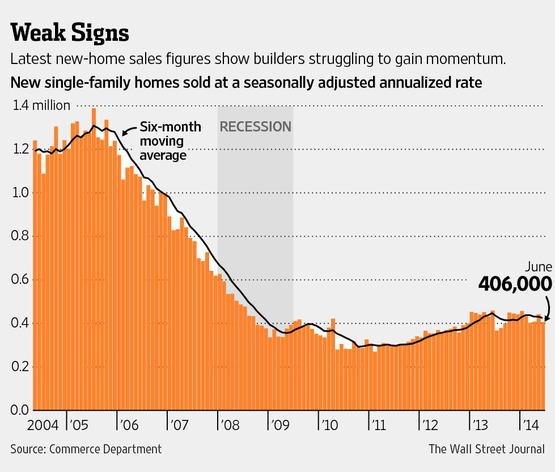