The New Oil Traders—–Moms and Millennials

When Erika Cajic woke before dawn one morning in early May and read that wildfires were breaking out in an oil-producing region of Alberta, she sat down on the family room couch with a cup of hot chocolate and her laptop and bought shares of an investment linked to crude.

The 45-year-old full-time parent of two in Mississauga, Ontario, like many investors, reasoned that the production outages would drive up the price of oil. By buying the VelocityShares 3x Long Crude Oil UWTI -0.73 % exchange-traded note, she tripled down on her hunch, as the product uses derivatives that aim to rise and fall at triple the daily change in oil.

Within about four days, she estimated she made about 500 Canadian dollars (US$384) on those trades after converting from U.S. dollars.

“The swings are gigantic lately,” she said of the product, known by its ticker UWTI, and the other energy products she has traded in recent months.

For some individual investors, crude is the new hot trade. Oil in the U.S. fell to its lowest level since 2003 in February but has surged roughly 90% since then. On Thursday, it traded above $50 a barrel for the first time since October. That compares with a stock market that has offered nowhere near that momentum.

“I just thought, let’s throw a couple of hundred dollars in it…and try it out,” said Matt Krasnoff, 26, of New York, who bought shares of UWTI last year after hearing about it from a friend. “I just enjoy the risk and the thrill of the market in general.”

CME Group Inc., CME 0.61 % the world’s largest futures-market operator, estimates that crude oil has been its second-most traded contract among retail investors this year after a contract tied to the S&P 500, and such investors make up about 10% of daily trading volume in oil, a record high, said Mark Omens, executive director of retail sales at CME.

Total assets in the 15 U.S. exchange-traded products that track crude, including UWTI, hit a record $8.5 billion in early March and had nearly $8 billion Wednesday, according to Bianco Research LLC, which specializes in investment analysis. That figure doesn’t distinguish between retail and institutional investors, which also have a large presence in the market.

Brokerages are keen to make sure that if traders lose money in these products, which can happen quickly, they are aware of that possibility. Some have spilled hundreds of words detailing the inner workings and risks of such products, which are prone to large daily percentage moves, even into the double digits.

Frederick Bailey, 59, of Savannah, Ga., said he put a modest amount of money in UWTI in January as crude broke below $30 a barrel and rode it higher as oil prices rebounded. Mr. Bailey, who said he is between jobs, once worked at banks that dealt with exchange-traded funds.

Mr. Bailey also visits online chatter sites talking about oil, such as StockTwits, where one poster this week wrote: “…once again the crude been rude to this dude.”

Millennials are also fans of crude-related trading, said Howard Lindzon, chairman and chief executive officer of StockTwits. UWTI and the VelocityShares 3x Inverse Crude Oil DWTI 0.47 % ETN, which bets on oil to decline, were the second- and third-most-visited pages during the first quarter on StockTwits, prompting the company to sell a T-shirt with the two tickers on the front.

Grant Heimer, a 25-year-old in Dallas, trades stocks as a hobby and learned about commodity exchange-traded products from his friends last year, he said.

An energy-industry software consultant who studied finance in college, he has traded oil and natural-gas exchange-traded products a few times using a smartphone app called Robinhood.

“Oil just seemed to make a lot of sense to me,” said Mr. Heimer. He has never held a position longer than five days and still has most of his portfolio in stock investments. Most of his oil trades made money, he said, but not all.

“I’m not careless,” said Mr. Heimer. “It’s a very appealing thing to do for somebody like me who’s OK with a small risk and a short amount of time.”

Some have ventured into selling the underlying futures contracts, where retail investors need permission to access the market.

Archna Jagtiani, a 42-year-old who lives in the Chicago suburbs, started trading after the financial crisis. “After 2010 when the market was up…my account had not come back and I was just paying fees,” she said. “It’s better this way. I cannot blame anybody if I lose money.” She said she spends her days trading and tutoring kids in math after the market closes.

Mr. Krasnoff works at LinkedIn Corp. LNKD 0.76 % in New York and keeps a list of his investments displayed on Yahoo Finance on his computer screen during the day. He said he typically invests in technology companies that he is familiar with and reads articles about the industry and watches Twitter TWTR 3.93 % to stay up to date. 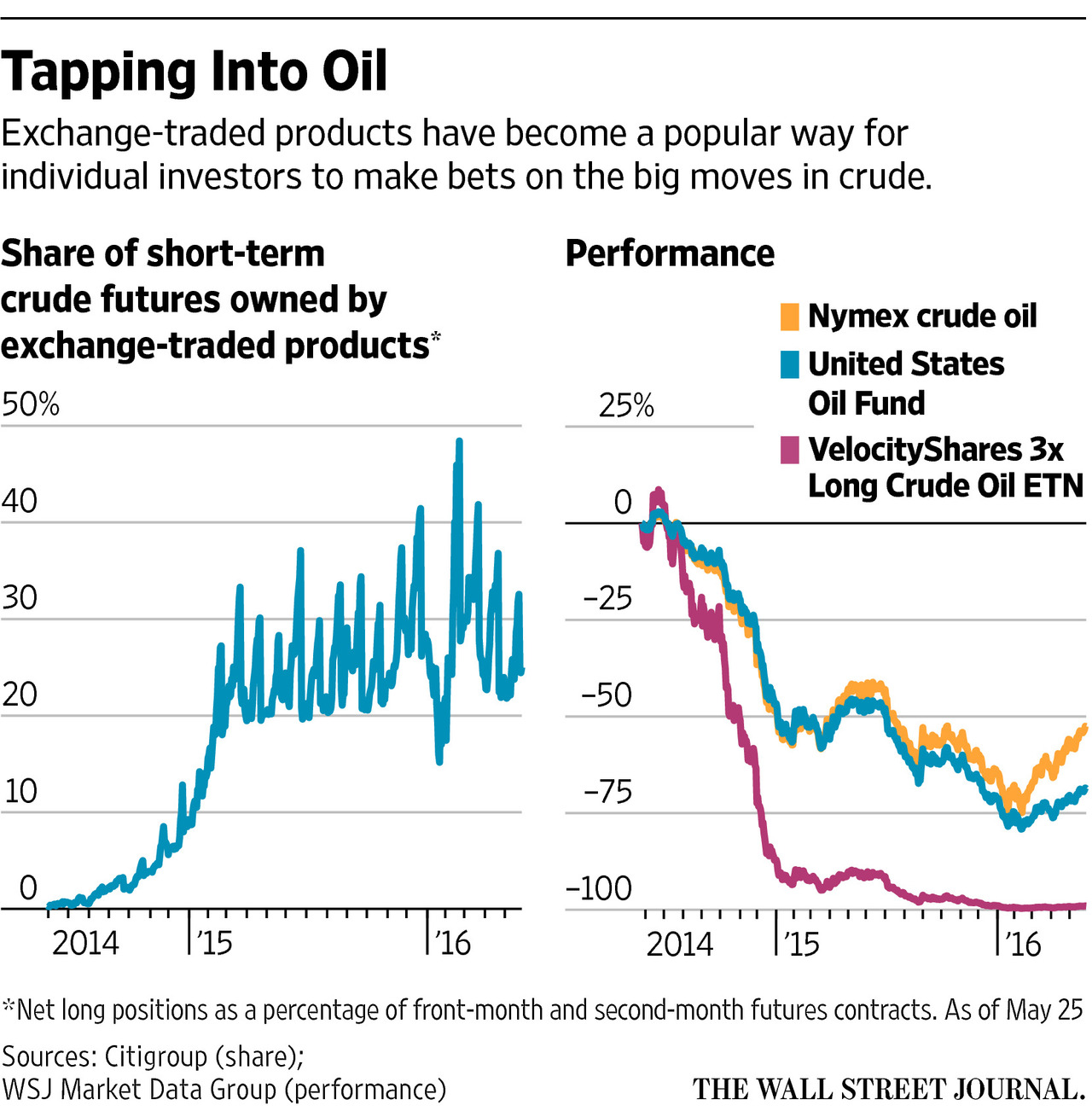 He ditched UWTI within a few months of trying it, after he lost money. “It was outside of the realm of what I knew…the last straw was realizing that I wasn’t informed enough,” he said. Now, he says, he is going to stick to investing in what he knows, like tech.