The Obama “Budget”: Payments To Individuals To Hot Record $2.9 Trillion And 71% of Total Federal Spending

Budget: What is the federal government’s most important function these days? Based on the Obama budget released today, it’s not defense, or roads, or education, or the environment. It’s cutting checks.

Buried deep in the president’s annual budget are a series of tables that few ever notice, but that are incredibly illuminating when it comes to understanding the size and scope of today’s federal government.

The table shows how much money the federal government spends on what budget officials describe as “payments to individuals.” Obama’s budget puts the figure for next year at a mind-boggling $2.9 trillion out of a $4.1 trillion budget. 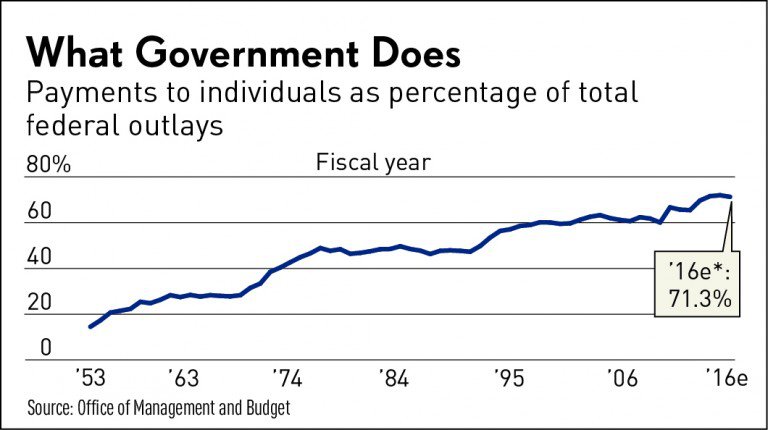 In other words, more than 70% of federal spending amounts to taking money from one set of pockets, and depositing it in another.

And this figure is rising fast. Payments to individuals accounted for 60% of the budget when Obama took office, and less than 50% as recently as 1991.

Surprisingly little of this money, however, helps the poor. Housing assistance, food stamps, welfare programs, and Medicaid comprise just 25% of all the payments to individuals.

The rest goes to middle class programs like Social Security, student aid, Medicare benefits, federal employee pensions and the like.

Among the fastest growing spending categories under Obama are Medicaid, which climbed 91% since he took office, food stamps and other nutrition programs (up 78%), Social Security (up 61%), and student aid, which shot up 55%.

ObamaCare added an entirely new category with its health insurance subsidies, which will cost taxpayers nearly $39 billion this year, and climb to $112.4 billion in just five years.

The problem is that with 70% of the budget composed of vast money transfer programs, cutting federal spending becomes increasingly difficult. If you want to make a meaningful dent in the size of the government, you’ll almost certainly have to cut the size of some of these individual government checks.

At the same time, most of the tax revenues are paid by an increasingly smaller share of wealthy. The top 5% now pay 58% of federal income taxes, according to the IRS, while the bottom half pay only 2.8%.

That means there will always be pressure to hand out even bigger checks to the masses, and send the bills to the “rich,” which is precisely what Obama’s budget proposes, and what Hillary Clinton and Bernie Sanders want to turbocharge should they get elected.

But as Margaret Thatcher so aptly noted about socialism, “eventually you run out of other people’s money.” That day is fast approaching here.