By MIN ZENG at The Wall Street Journal

Investors are handing the federal government a lot of free money.

The pile of Treasury bills sold at an interest rate of zero since the financial crisis topped $1 trillion this summer and grew further this week, with auctions for three-month bills on Tuesday and one-month bills on Wednesday that each carried no yield.

On its surface, it makes no sense for investors to lend their cash for free. But with interest rates stuck near zero and supply limited by the looming U.S. debt ceiling, investors who need a place to park their cash have few other options.

“It is absolutely weird,’’ said Thomas Simons, vice president and money market economist in the fixed-income group at Jefferies LLC. “This is the world we are living in.”

Treasury bills have maturities ranging from a few weeks to a year. The government uses them to meet its short-term financing needs. Buyers like corporations use bills as a safe place to stash money that they don’t want to tie down for longer periods, and tighter regulations after the financial crisis have boosted demand for bills among money-market funds and banks. 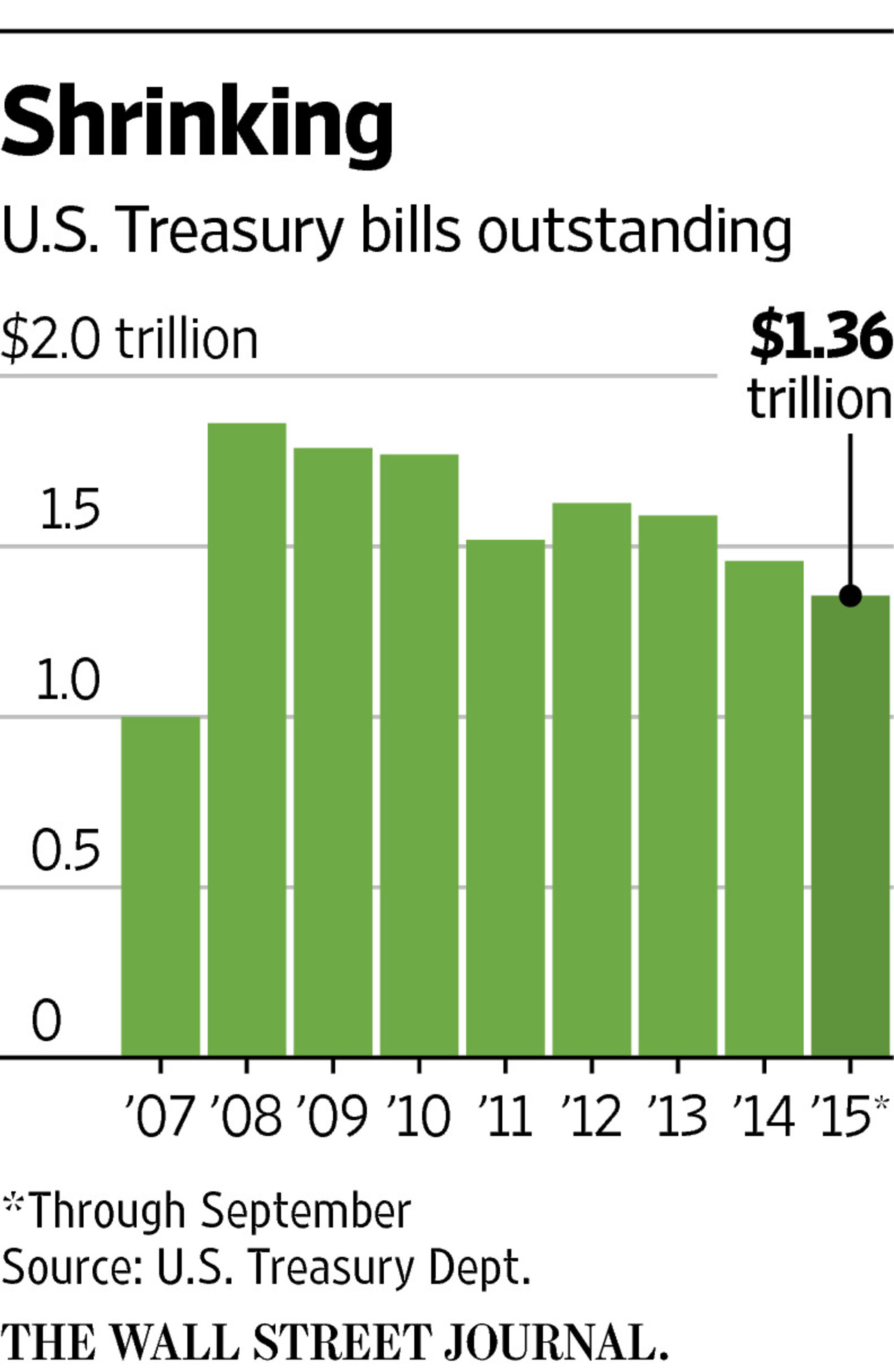 The mismatch of supply and demand has let the Treasury drive a hard bargain when selling bills. Since September 2008, the U.S. has sold bills 46 times with a yield of zero, for a total of $1.17 trillion of bills that pay no interest, according to Andrew Hollenhorst, U.S. short-term interest-rate strategist at Citigroup Global Markets Inc.

The total accounts for just 3% of the total bill supply—$40.4 trillion—over the same period. Still, the trillion-dollar mark highlights the distortions caused by the long stretch of low interest rates, as well as the pressure on savers, who are getting little for their money.

Investors are growing increasingly skeptical that the Federal Reserve will be able to raise short-term interest rates this year with inflation subdued and growth not robust. Tepid data on retail sales and low inflation sent the yield on the benchmark 10-year Treasury note below the 2% mark Wednesday.

The yield fell to 1.982%, compared with 2.056% Tuesday. Yields fall as bond prices rise. It marks the lowest closing level since April 28.

“Yields are falling because growth and inflation are weakening and Fed policy has been ineffective to do much about it,” said Guy Haselmann, head of U.S. interest-rate strategy at Bank of Nova Scotia in New York.

‘It is absolutely weird. This is the world we are living in.’

Bills maturing in three months sold at a yield of zero on Tuesday, only the second auction of those bills ever to deliver that result. One-month bills sold at a zero yield Wednesday for the seventh straight time as the $5 billion offering was the smallest since the Treasury introduced one-month bills in 2001.

In the secondary market, some investors have been willing to buy Treasury bills at slightly negative interest rates over the past few weeks. An investor buying Treasurys with a negative yield would lose a bit of money when the bills mature—or make money if he can sell them at an even deeper negative yield.

In Europe, government debt maturing in two years in a number of countries, such as Germany, France and Finland, has been trading below zero for months. In Switzerland, even government bonds due as far out as 2027 carried negative yields Wednesday. The phenomenon was rare before the financial crisis. But it is becoming the new normal as successive waves of monetary-policy easing fails to stir tepid economies around the world.

The Treasury had been reducing the supply of bills in favor of taking advantage of low rates to issue longer-term debt. Back in May, the Treasury said it planned to boost supply to provide more liquidity for the bills market. But the debt ceiling looming later this year has led the Treasury to cut supply.

Treasury Secretary Jacob Lew said earlier in October that the government would be left with just $30 billion in cash on or around Nov. 5 and called on Congress to immediately raise the federal borrowing limit to avoid market disruptions and threats to the nation’s credit rating.

Investors say bill yields would rise if the Treasury increases supply once the debt-ceiling issue is settled. The Fed is on the cusp to start raising short-term interest rates, another factor that would push up bill yields.

Few, though, expect bill yields to rise significantly. Many investors in short-term debt will have to make do with historically paltry returns from bills.

“Savers continue to get below historical average returns, and expectations of returns will be lower,’’ said Kam Poon, portfolio manager specializing in short-term debt instruments at Aberdeen Asset Management, which has $483.3 billion in assets under management.