Throughout oil’s torrid rally from the February lows, one major driver of demand – namely China – had been broadly ignored by the punditry which instead focused on supply, whether excess OPEC oversupply or lack thereof, due to production disruptions in Canada or Nigeria. And yet, China and specifically its demand, may have been the elephant in the room all along.

Two months ago we reported that “China Is Hoarding Crude At The Fastest Pace On Record“, a move which among other things was attributed to China’s aggressively filling up its Strategic Petroleum Reserve.  However, just a few weeks ago, we followed up with “China Oil Imports Drop To Four Month Low As Demand Is Expected To “Moderate Significantly” In 2016.”

We now may have an answer what has caused this drop.

As Bloomberg says, citing a JPM report, “one of the pillars of oil’s recovery from the lowest price in 12 years may be on the verge of crumbling.”

The reason: as many speculated, a big source of China’s demand in the past 5 months was Beijing’s decision to stockpile oil for its SPR. However, that is now over as China is likely close to filling its strategic petroleum reserves after doubling purchases for it this year as prices plunged. JPM estimates that China’s SPR demand was equivalent to approximately 1mm bpd. More importantly, stopping shipments for the reserve would wipe out about 15 percent of the country’s imports, according to the bank.

Here are the details from JPM:

China has taken the opportunity of lower oil prices since early-2015 to accelerate the strategic petroleum reserve (SPR) builds at c.1mbd, pushing the total oil in stock under SPR to an estimated 400mmbbl, or 53 days of net crude oil import equivalent, based on JPM calculation of multiple data points announced publicly. This volume might be close to the capacity limit, in our view, and together with potential teapot utilization pullback and slower-than-expected demand from China could increase near-term risks to global oil prices (c.1.2mbd impact). We stay cautious on upstream plays and continue with our relative bias on the downstream. 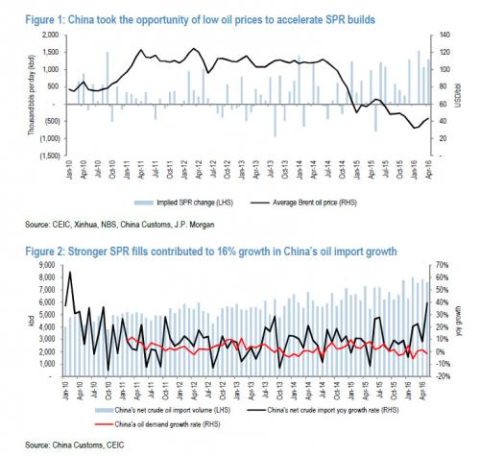 JPM SPR methodology. China regularly publishes four data points for  crude oil: domestic production, net imports, commercial inventories and refinery throughput. Given the exclusive consumption of crude oil at refineries in China, we derive the SPR monthly changes to account for the balance implied by the four data sets. Furthermore, based on China government’s official release of SPR level in 2014/15, we arrive at the current SPR volume, which compared with China’s previously announced SPR plans seems to be close to the max .

Below is JPM’s estimate of the stunning rate of increase in Chinese SPR build, which rose from 491Kbpd average in 2015 to a record 1.191MMbpd in 2016 through May. 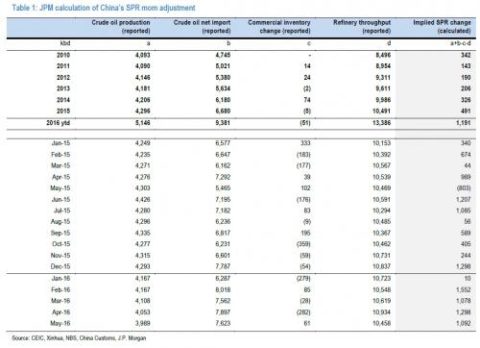 Bloomberg reminds us that Chinese crude imports have risen 16 percent this year, and the country is rivaling the U.S. as the world’s biggest oil purchaser. That demand, along with supply disruptions from Canada to Nigeria, has helped boost oil prices about 80 percent since January. Chinese imports surged to a record 8.04 million barrels a day in February. The nation may surpass the U.S. as the world’s largest crude importer this year with average inbound shipments of 7.5 million barrels a day, according to Zhong Fuliang, vice president with China International United Petroleum & Chemicals Co., the trading arm of the nation’s biggest refiner.

However, if JPM is right, China’s imports are about to hit a brick wall.

So how does JPM calculate the capacity of China’s SPR and how much capacity is left? Here is the answer:

There are very limited data points regarding China’s SPR levels and hence questions arise about the reliability of our derived volume because the data base on which our calculations are made come from various sources: crude oil production and refinery throughput from the China National Bureau of Statistics (NBS), net imports from China Customs, and commercial inventory changes from the official newswire Xinhua News Agency. There might be a data consistency issue.

We attempt to test the quality of our data by comparing the only publicly available SPR volumes that the NBS formally reported for November 2014 and mid-2015. According to the authorities, China had 91mmbbl (12.43mt) of SPR stored in tanks as of November 2014 (versus SPR capacity of 103mmbbl) and the volume increased to 191mmbbl (versus SPR capacity of 180mmbbl) as of mid-2015. China government rented some commercial tanks for SPR filling for the mid-2015 volume, according to NBS.

Although the difference is not desirably narrow, we think it is acceptable, or at least it gives us a sense of how to adjust for the potential actual volume. Based on this finding, we further interpolate the current SPR volume by applying the monthly volume changes to the 180mmbbl base reported by the NBS for Dec 2015. And our calculated SPR level as of May 2016 is 444mmbbl. Applying a 10% discount as indicated by the end 2015 data discrepancy, we get 400mmbbl, or 53 days of net import equivalent. That compares with 25 days at Dec 2015 and 15 days at Nov 2014.

Based on the previous government plans cited by state media, the total capacity of China’s SPR under all three phases would be 511mmbbl. The current SPR volume calculated above implies 22% distance from the previously announced capacity target, meaning the cap will be hit after continuous builds at the current speed (1mbd) for another three months.

The implication if JPM is accurate is simple: China will import far less oil starting in September, 1.2mbd to be specific.

Based on our base case of assuming another high SPR builds through August and the following three assumptions listed below, our model suggests a 15% mom decline in China’s crude oil net imports in September, or a loss of 1.2mmbbl versus August and 0.8mmbbl less from the 12-month average. Although it’s difficult to have an accurate forecast of the specific timing of the drop, we think it’s worth noting this risk and previous accumulation looks high based on our assessment. We do not believe the 16% growth in oil imports ytd is sustainable despite a domestic oil production decline, as demand is weak (2% expansion in oil processing with gasoline an increased risk), if inventory capacity reaches the limit.

As for the future SPR capacity additions, we think there has been lower urgency from the Chinese government to push for new construction because they are also seeing lower for longer oil prices with government funding possibly another issue. This also explains their intention to include company contributions under the new regulations and delay the Phase III to after 2020.

What does the market think of JPM’s assessment? As of this moment WTI is down, 2.4%, below $49, on a day when it would otherwise be soaring and keeping up with the rest of the risk complex. Because between a 1 million drop in demand, and the increase in supply which Goldman warned about last night as Canadian and Nigerian disruptions fade away, suddenly the market will find itself oversupplied by 2 million more barrels. This excess oil will either have to be stored somewhere, most likely offshore with Cushing also close to operational capacity and ARA stocks at multi-year highs, or it will have to be sold. If it is the latter, a rerun of last year’s second half swoon is now on the table.
Source: Oil Bulls Beware: Crude Demand Is About To Slide As China’s SPR Is “Close To Capacity”