Last summer, China unleashed an unprecedented array of measures – up to and including the arrest of “malicious short sellers” and prominent hedge fund mangers – to prevent its stock market bubble from bursting. It failed. A few months later, the chaos has spilled over from the relative containment of the capital markets and has engulfed not only the country’s FX reserves, and capital account, but also the entire economy.

As a result, China’s government has gone all in, and as Bloomberg reports, is stepping up efforts to ward off a potential financial crisis, warning bank executives that their jobs are on the line unless they control risks and putting restrictions on an increasingly popular way of evading capital controls. These moves come in response to China’s slowest economic growth in a quarter century fueled concerns that bad debts will cripple the banking system and a catalyst for why virtually every hedge fund is now short the Yuan.

As Bloomberg puts it politely, these actions “add to evidence that President Xi Jinping’s government is moving with increased urgency to rein in financial-system risks.”

We disagree: these are the same panicked, “after the fact” reactions that only a government on the verge of losing control will engage in. As for their ultimate success, just compare the current price of the Shanghai Composite and its recent all time highs.

Here is a quick summary of the Chinese actions to if not prevent, then at least delay, financial and economic collapse.

First, in January, China aggressively stepped up measures to halt and slow down capital outflows that hit $1 trillion last year by boosting capital controls first described here last September. The tightening marked a reversal after years of easing that spurred global use of the yuan, a trend that turned on China when speculative bets against the currency offshore jumped.

Some of the primary measures have included:

However, a recent estimate by Goldman Sachs put the total January FX interventions (and thus capital flight) at $185 billion, well above the December total and the second highest since August. This would means that whatever China has done so far has failed to stem the tide of capital outflows. 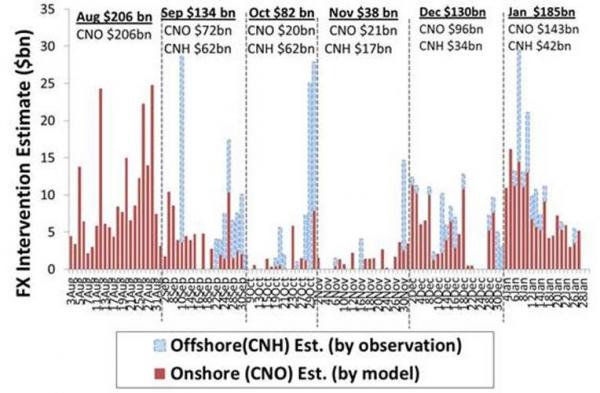 Which explains the latest, second round of interventions. Once again, courtesy of Bloomberg, these are as follows:

Expect many more actions and interventions over the coming months, all of which like last year, will be self-defeating as the harder China presses on its porous “capital” firewall, the more holes that will emerge.

Ultimately, what will happen is that the “Shanghai Accord” idea, in which China announces a dramatic one-off devaluation, is implemented which is perhaps the only shock-approach that could possibly stem the capital flight even if it comes at the expense of a global deflationary wave.

The only question is whether China will have any FX reserves left by then, and just how widespread public anger and civil discontent and disobedience will be as a result of mass layoffs and plant shutdowns as China, courtesy of mean reversion, finds itself in the same depression which its epic debt-creation engine in the period 2009-2014, and since shut down, saved the rest of the world from.