By Michael Lingenheld at Forbes

There is reason for optimism. Factories saw new orders come in at a faster pace and production was strong. But, other than that, the ISM details were far from impressive. Not surprisingly, the prices paid index came in below 40 for the third consecutive month, reflecting the deflationary headwinds flowing through the economy. More importantly, the employment details showed a sharp contraction, down to 47.6 versus 50.5 in September. The market is more concerned about non-farm payroll figures, but this sure seems to be a leading indicator, especially when you consider the weakness from September’s NFP report.

It’s the same story in Germany, where mechanical engineering orders slumped 13% Y/Y in September, hit by an 18% drop in foreign demand. In a sign that the weakness in September wasn’t just a blip, foreign orders from outside the eurozone were down 7% in the nine months through September from the same period a year earlier, hit by a slowdown in developing economies that account for around 42% of Germany’s plant and machinery exports.

It’s clear that most of this industrial weakness is being driven by China. Domestic orders for Germany’s mechanical engineering industry were up 2% in the nine months through September from the same period a year ago, while eurozone demand rose 13% over this period. European demand looks ok, it’s just not strong enough to offset the weakness driven by China. German car maker Audi said Monday that falling Chinese demand is forcing it to slash production of Audi models at a plant in Changchun nearly 11%. 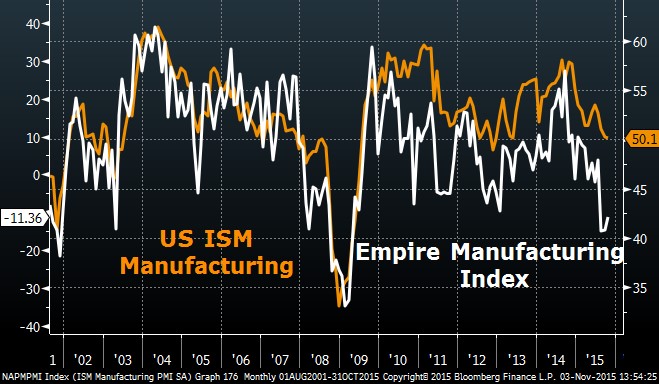 General Motors Chief Executive Mary Barra last month said the slowdown in China, the world’s second-largest economy, “is not only affecting our business in China but also in the other international operation markets outside of China because these economies are so dependent on China.” Now, the market has had plenty of time to price in this weakness, which is one reason why stocks have rallied so much since September 29. But the Fed hiking into a manufacturing slowdown seems like an odd move, one that could backfire if the ISM breaks below 50 in the coming months.

Source: US Manufacturers Can’t Shake the Slowdown in China – Forbes