Two weeks ago, when looking at the latest import price index data, we showed something disturbing: China has become an all out exporter of deflation. As the chart below shows, In November, import prices from China decreased 1.5% over the past 12 months, the largest year-over-year drop since the index declined 1.7% for the year ended in January 2010.

Howdid this happen? As we explained, with all of its domestic markets fully saturated, China has had no choice but to export its soaring commodity production as we explained in “Behold The Deflationary Wave: How China Is Flooding The World With Its Unwanted Commodities.”

As we noted then, shipments of steel, oil products and aluminum are reaching for new highs, according to trade data from the General Administration of Customs.  That’s because mills, smelters and refiners are producing more than they need amid slowing domestic demand, and shipping the excess overseas. 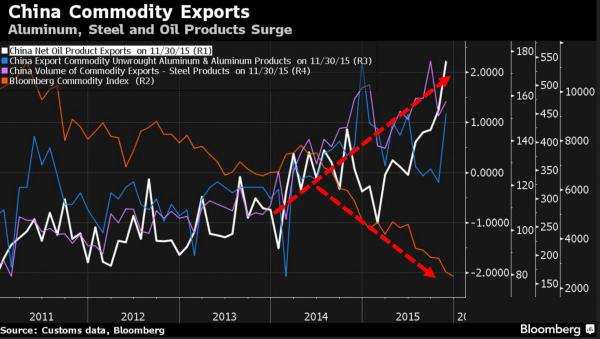 Logically, the less domestic demand for steel, and the greater China’s steel exports, the lower the price continues to tumble, now at a 10 year low. 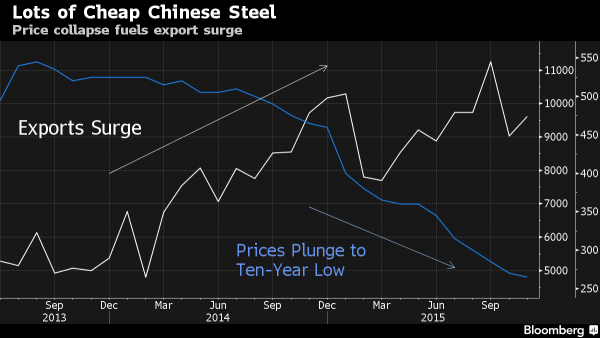 That’s because mills, smelters and refiners are producing more than they need amid slowing domestic demand, and shipping the excess overseas.

The flood of Chinese supplies is roiling manufacturers around the world and exacerbating trade frictions. The steel market is being overwhelmed with metal from China’s government-owned and state-supported producers, a collection of industry associations have said. The nine groups, including Eurofer and the American Iron and Steel Institute, said there is almost 700 million tons of excess capacity around the world, with the Asian nation contributing as much as 425 million tons.

According to Macquarie’s Colin Hamilton, head of commodities research, it is about to get even worse: the price of hot-rolled coil, used in everything from fridges to freight containers, may decline about 13 percent next year. The nation’s steel exports, which have ballooned to more than 100 million metric tons this year, may stay at those levels for the rest of the decade as infrastructure and construction demand continues to falter. 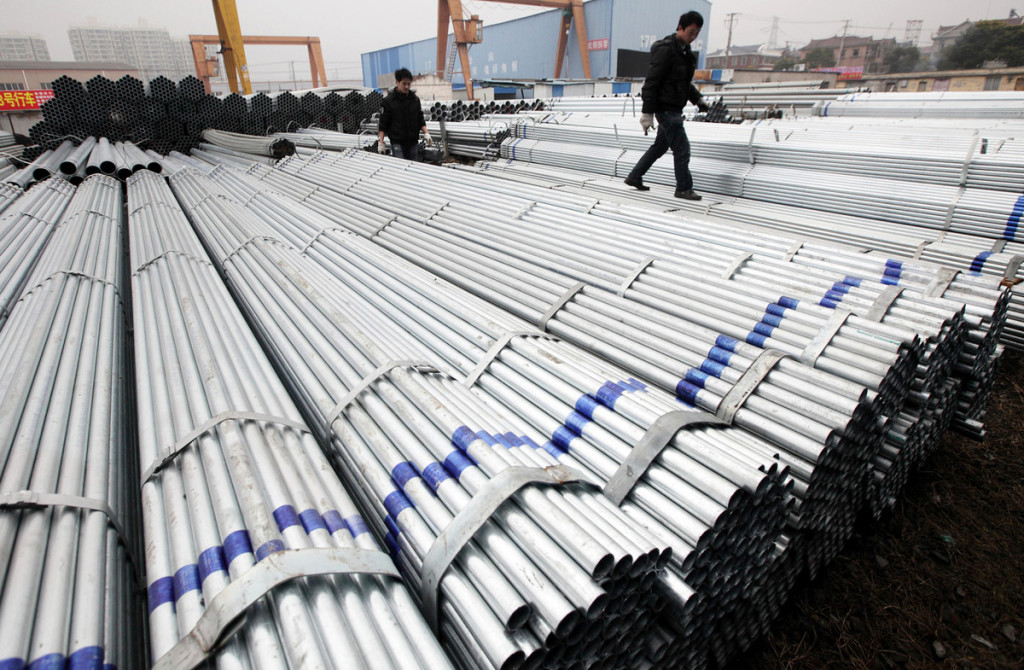 A worker walks on stacks of steel pipes at a storage yard in Shanghai.

China’s metals industry is facing the same problem that OPEC has had to deal with over the past year: a huge supply glut faced with declining global demand, only unlike OPEC there is no “efficient, rational” producer cartel that can (or in the case of OPEC could) implement production limits.

While falling steel prices are partly driven by the collapse in raw materials and lower output costs, “it’s just more to do with the fact the industry was built for demand growth that hasn’t come through,” Hamilton said last week. “We’re past peak steel demand. I think provided there is overcapacity in the Chinese system and given where demand is, it’s going to be like this for some time.”

Well, maybe not: there is one thing that could dramatically slow down China’s metal exports – tariffs, anti-dumping duties and other forms of protectionism.

“What may slow down the exports is anti-dumping and protectionist measures that several countries have taken against cheap imports,” said Ernst & Young’s Agrawal. “We’re going to see an impact. More and more countries are raising their objections.”

In other words, a trade war.

To be sure India has already done just that:

India plans to step up its protection for debt-laden domestic steelmakers by imposing a minimum price on steel imports among other measures, Steel Secretary Aruna Sundararajan said in an interview this week. The import curbs are necessary to ensure a “level-playing field” for Indian companies after restrictions imposed in September failed to stop a decline in prices, she said.

According to a report released Tuesday by the US Department Of Commerce, corrosion-resistant steel imports from China were sold at unfairly low prices and will be taxed at 256 percent.

The measure is clearly aimed exclusively at China’s dumping of steel on the US market, and its relentess exports of deflation.

According to Bloomberg, imports from India, South Korea and Italy will be taxed at lower rates. Imports from Taiwan and Italy’s Marcegaglia SpA will not face anti-dumping tariffs. The government found dumping margins of 3.25 percent for most South Korean steel imports, with Hyundai Steel Co.’s shipments subject to duties of 3.5 percent. Imports from Italian companies excluding Marcegaglia will be taxed at 3.1 percent. Indian imports are subject to duties from 6.6 percent to 6.9 percent.

Which means that the biggest “beneficiary” of this dramatic import price surge will be none other than Beijing.

“We’re concerned that the dumping that’s occurring is at higher levels than these determinations reflect,” Tim Brightbill, a partner at Wiley Rein LLP, a law firm representing U.S. steelmaker Nucor Corp., said Tuesday in an interview. “We have serious concerns that these preliminary duties are not enough at a time when unfairly priced imports continue to surge into the U.S. market at unprecedented rates.”

According to some the US foray into trade wars was long overdue:

U.S. producers including Nucor, U.S. Steel Corp. and Steel Dynamics Inc. filed cases in June alleging that some products from China, India, Italy, South Korea and Taiwan had been dumped in the U.S., harming domestic companies. In November, the government found that all those countries, except Taiwan, subsidized their domestic production by as much as 236 percent of its price.

The tarfiff hike comes on the heels of a previous announcement from November 3, which saw countervailing duties as high as 236%. Together these create a barrier to imports of these steel products from China, said Caitlin Webber, an analyst at Bloomberg Intelligence in Washington.

“A 500 percent duty is obviously prohibitive,” Webber said in an interview. “The lower ones are much less prohibitive and would probably have a lower impact on imports.”

This means that suddenly China’s steel exporters will have to scramble to find a comparably large market  in which to sell their wares as now exporting to the US is prohibitively expensive and would result in massive losses to domestic producers.

According to Bloomberg calls to the spokesman’s office at China’s Ministry of Commerce in Beijing weren’t answered. An official who answered a call to the China Iron & Steel Association couldn’t immediately comment. Not like they would have much to say.

The problem for China is that as we have explained previously, unless local commodity producers can keep generating some cash flow, even if it is negligible, China will be swept in a default wave that will sweep away all the overlevered producers of steel and other commodities, leading to social unrest or worse.  We already know that at current prices more than half of China’s commodity producers can’t even make one coupon payment. What happens now when the rush to the bottom enters the final laps and the bottom falls out of prices? 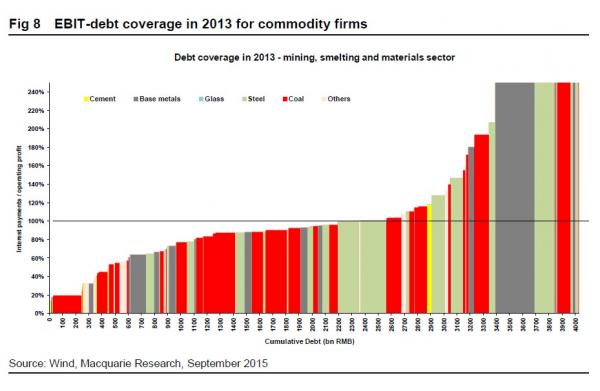 Which also means that now that the US has fired the first trade war shot, it will be up to China to retaliate. It will do so either by further devaluing its currency or by reciprocating with its own protectionist measures against the US, or perhaps by accelerating the selling of US Treasurys. To be sure, it has several choices, clearly none of which are optimal from a game theory perspective, but now that the US has openly “defected” from the “prisoner’s dilemma” game, all bets are off.