The Ukrainian Mess Metastasizes—–Now US Covertly Shipping Weapons Through UAE

I have a couple emails from Ukraine to share, one from two days ago, one from yesterday. Both are from “Ellen” who lives in Kiev (name changed).

Two Days Ago From Ellen

As you know, the Debaltsevo pocket situation is resolved. It’s not as bad as it could have been in terms of casualties. However, this was a crashing defeat of Poroshenko’s generals.

I don’t know how many more losses our society can take, but people are very angry. Currency keep plunging every day. Today it takes 30 hryvnias to buy one US dollar. It seems we have default without official announcement of it.

There is a new problem: total media thought control. In Ukraine we used to have free speech, but not any longer. War propaganda is everywhere and if someone doubts official policy, the journalist will be cast out or put in prison.

It is worse now than under Yanukovych. There is an atmosphere of fear everywhere. Today, a new law was passed, and now the president can switch off any TV news channel, any paper.

Total mobilization is underway. Anyone who refuses to join the army will go to jail.

Putin opened the border for Ukrainians who don’t want to join the army. Millions of men from Ukraine went to Russia. Not many want to go to war. One defeat after another discourages people.

Many think Debaltsevo was breaking point. Some say separatists will take new areas with less resistance from Ukrainian army. Hard to say. Many think Mariupol, a city of 400,000 people is next. If separatists storm Mariupol it will be a bloody mess world haven’t seen for long time.

News today is Ukraine will buy arms from UAE, perhaps arms that Americans previously sold to UAE. Poroshenko signed the contract, but we do not know what exactly Ukraine is buying.

It seems pretty much like Ukraine is in default. Today $1 is worth 36 hryvnias on the black market. A Week ago it was 20 hryvnas. No one knows where the bottom is. People buy anything just to get rid of hryvnias.

The only thing missing from a default is the announcement. I guess Poroshenko waits for bail out money from IMF and America. No one is in a hurry to bail us out because they know the money will be stolen by our corrupt officials.

We never seen prices rise so fast. Poroshenko came to power with 1 dollar around 9-10 hryvnias and now it’s 36. Meanwhile his chocolate factory profit has gone up 8 times. His friends are also doing very well. People in Ukraine are very angry. Maybe this anger will be out on the streets soon.

Given that Obama, despite pressure from the Pentagon and the Senate, has not yet taken a decision, it seems that a “buffer” scheme has been activated, whereby a country dependent on the U.S. is prepared to ship arms to Ukraine, essentially becoming a sort of middleman through which American weapons systems are sent to Ukraine. These can come in the guise of “arms from the UAE”, with the U.S. seemingly uninvolved.

Specifically, the UAE has the BGM-71 TOW US antitank system, long ago discussed in relation to the pumping up junta troops’ defensive lethal weapons. 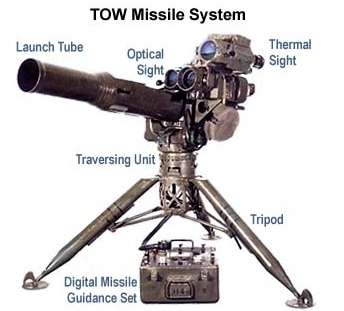 Wikipedia describes the BGM-71 TOW as a “Tube-launched, Optically tracked, Wire-guided” anti-tank missile. First produced in 1970, the TOW is one of the most widely used anti-tank guided missiles.”

An optical sensor on the sight continuously monitors the position of a light source on the missile relative to the line-of-sight, and then corrects the trajectory of the missile by generating electrical signals that are passed down two wires to command the control surface actuators.

On February 7, Stratfor wrote US Considering Lethal Aid to Ukraine.

A significant portion of the anti-tank weapons Ukraine owns are old and likely inoperable. Moreover, only a few effective weapons such as the 9K115-2 Metis-M, indigenous Skif missile and RPB-29 are in its stockpiles. If the United States or its NATO allies were to transfer Javelin anti-tank guided missiles or heavier crew-served TOW missiles to Kiev, it could give Ukrainian troops a credible capability against separatist and Russian heavy armor.

That just happened. Expect Russia to respond in kind. And expect more deaths.

One of the problems in sending top-notch equipment to Ukraine is what happens to it. For example Colonel Cassad reports …

“Among the trophies in the Debaltsevo area was a damaged American mortar counter-battery radar system.  The junta claims that during the flight of the 128th Brigade its soldiers were able to wreck it. But there is some doubt seeping through these claims. It is likely that the radar, in one condition or another, passed into the hands of the Novorossia Armed Forces, which means that it will get to Russia and be studied, as happened with American hardware captured during the Olympic (2008 Russia-Georgia) war.”

I do not know the equipment, or the significance, but if Cassad thinks it happened, history suggests it probably did.

Say Something Against the Draft – Go to Jail

Ellen commented “Total mobilization is underway. Anyone who refuses to join the army will go to jail“.

It’s a bit worse than that. If you call for a boycott of mobilization, you will be arrested.

In mid-January, journalist Ruslan Kotsaba recorded a video in which called for the abandonment of the mobilization.

His wife reported that he had been arrested on suspicion of “SBU gosizmene”. The adviser to the chairman of the SBU Markiyan Lubkivsky commented on the detention of journalist as follows: “Given that the actions R.Kotsaby there are signs of a crime under Part 1 of Article 111 and Part 1 of Article 114 of the Criminal Code, he announced that suspicion.”

Here’s a literal headline translation that’s easy to understand: “For Agitation in Social Networks Against Mobilization Can Collect Up to 8 Years“.

Here’s a final post that shows who we are supporting.

The prosecutor’s office in Kharkov starts Criminal Proceedings on a Corporation’s Refusal to Turn Over Minivan for Military Use.

In Kharkov, prosecutors opened criminal proceedings on the failure of one of the companies within the mobilization region to transfer a minivan for the needs of the APU.

The prosecutor’s office of the Frunze district of Kharkov started criminal proceedings under Part. 1, Art. 364-1 (abuse of authority by an official of the legal entity of private law) of the Criminal Code against the leadership of one of the machine-building enterprises of Kharkov.

According to the District Attorney Stanislav Pieve, officials Ltd. refused to give within the framework of the mobilization for the needs of the Armed Forces of Ukraine technique.

“At the request of the district military office to provide vehicles in the company announced its absence. However, as it turned out, the management of concealed information about the presence of a van,” – said Pieve.

Sheesh. From the last paragraph above, it appears this company was charged because it concealed a minivan.

For now, I believe this type of thuggery is primarily happening in Eastern cities not under separatist control. I don’t think they would dare do this in Kiev yet.

If they did, I would expect an uprising if not takedown of Poroshenko. Recall that Ellen said “Maybe this anger will be out on the streets soon.”

The problem is, the asshats associated with Poroshenko are even worse than he is.