Having pounded the table on buybacks as the only marginal source of stock purchasing since some time in 2013, we were delighted one month ago when Bloomberg finally got it, writing an article titled “There’s Only One Buyer Keeping S&P 500’s Bull Market Alive.” The answer: corporate stock repurchases of course.

This is what it found:

Demand for U.S. shares among companies and individuals is diverging at a rate that may be without precedent, another sign of how crucial buybacks are in propping up the bull market as it enters its eighth year. Standard & Poor’s 500 Index constituents are poised to repurchase as much as $165 billion of stock this quarter, approaching a record reached in 2007. The buying contrasts with rampant selling by clients of mutual and exchange-traded funds, who after pulling $40 billion since January are on pace for one of the biggest quarterly withdrawals ever.

“Anytime when you’re relying solely on one thing to happen to keep the market going is a dangerous situation,” said Andrew Hopkins, director of equity research at Wilmington Trust Co., which oversees about $70 billion. “Over time, you come to the realization, ‘Look, these companies can’t grow. Borrowing money to buy back stocks is going to come to an end.”’

But, when you have the ECB backstopping purchases of corporate bonds, giving companies a green light to issue debt at will and use the proceeds to buyback even more stock, it won’t end just yet.

However, now that it is common knowledge that over the past several years the market has been conducting the most elaborate acrobatic example of pulling itself up by its bootstraps, by conducting a slow motion LBO in which just over 1% of the S&P has been purchased with incremental leverage, another question which bears answer is how much of S&P EPS growth comes from buybacks?

This is important because with Q1 earnings season starting and expected to post the worst, -8.5% drop in EPS since the financial crisis, and one in which collapsing energy and financial will be routinely ignored, we asked what would happen to “earnings” if one also excluded the benefit from buybacks.

Here is the answer courtesy of Deutsche Bank:

About 25% of S&P 500 EPS growth comes from buybacks on average since 2012. The S&P 500 companies on aggregate pay out 2/3 of their earnings through dividends & buybacks. 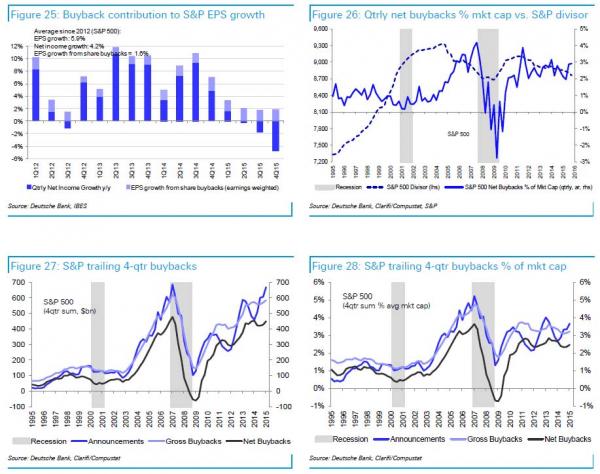 Buybacks are an important part of the earnings payout and a significant driver of total shareholder return and EPS growth in a slow sales world. However, the complexities in correctly measuring buyback payout ratios, buyback yields and buyback flows cause investor confusion. Just as option expense shouldn’t be excluded from EPS or from any FCF measures used for valuation, it should not be neglected in net buyback activity measures. Buyback yield estimates should reflect the continuous issuance of stock to employees at option exercise prices that are well below the market price at which shares are repurchased. This is why we estimate buyback yield as: (net dollars spent on buybacks less option expense) / market cap. This is because although companies report net dollars spent on buybacks, they spend more per share repurchased than what they receive per share issued.

In other words, since the financial world now openly excludes everything it does not agree with, if one were to exclude the contribution of buybacks to Q1 earnings, the S&P would be down not 8.5% but double digits. And, more troubling, if excluding energy and buybacks, then Q1 EPS would be not only negative (7 of 10 sectors are projected to decline in Q1, so energy and 6 others), but even more negative. We expect this to be addressed by the mainstream media some time in 2018.

Source: How Much of S&P Earnings Growth Comes From Buybacks – ZeroHedge