Driving home from work on Friday night I found it terribly amusing listening to the “business journalists” on the local news station trying to explain the 531 point plunge in the Dow and the 1,105 point plummet from the Tuesday high. The job of these faux journalist mouthpieces for the status quo is not to report the facts, analyze the true factors underlying the market, or seek the truth. Their job is to calm the masses, keep them sedated, and paint the rosiest picture possible.

The brainless twit who reported the stock market bloodbath immediately went into the mode of counteracting the impact of what was happening. She said the market is overreacting, as the country has strong job growth, low inflation, a strongly recovering housing market, and an improving economy. The fact that everything she said was a complete and utter falsehood was exacerbated by her willful ignorance of the Fed created bubble leading to the most overvalued stock market in history. How can these people pretend to be business journalists when they haven’t got a clue about stock market valuations and just say what they are told to say?

Anyone who listens to a mainstream media pundit, talking head, or spokes bimbo deserves the reaming they are going to receive. They are paid to lie, obfuscate, spin, and propagandize on behalf of their corporate media executives, who are beholden to Wall Street bankers, mega-corporations, and the government for their advertising dollars. The mainstream media is nothing but entertainment for the masses, part of the bread and circuses designed to distract the dumbed down, iGadget addicted, ignorant masses.

The entire stock market bubble has been created and sustained by the Federal Reserve and their QE and ZIRP schemes to prop up insolvent Wall Street banks, enrich corporate executives, and produce the appearance of a recovering economy. The wealth was supposed to trickle down to the masses, but the trickle has been yellow in appearance and substance. The average American is far worse off today than they were in 2007, with the Greater Depression Part 2 underway.

The Fed balance sheet currently stands at $4.5 trillion. Seven years ago this week it stood at $931 billion. Seven years before that it stood at $641 billion. From August 2001 through August 2008 the Fed grew their balance sheet by 45%. This period encompassed a recession, dot.com implosion, and a housing crash. Since 2008 the Fed felt it necessary to increase their balance sheet by 383% even though we have supposedly been in an economic recovery for over six years, with unemployment back to 2007 levels, corporate profits at record highs, and everything back to normal if you listen to the mainstream media.

Someone needs to explain the correlation between the Fed balance sheet and the S&P 500 to the bubble headed spokes models  on CNBC, Fox, CNN, and MSNBC. The economic recovery is nothing but a debt saturated fraud, propped up by subprime auto loans, 7 year 0% auto financing schemes, enslaving young people in student loan debt that will never be repaid, pretending unemployed people aren’t unemployed, under-reporting inflation to suppress wages and inflate GDP, and artificially inflating stock, real estate, and bond markets with negative real interest rates.

Anyone who doubts the sole purpose of QE1, QE2, and QE3 was to boost the stock market and create the glorious “wealth affect”, is either blind, dumb or a direct beneficiary of the scheme. When the S&P 500 bottomed at 666 in March 2009, the Fed balance sheet stood at $1.9 trillion. In June of that year, the official end of the recession, the Fed balance sheet stood at $2.1 trillion. If the recession was over in June 2009, why would the Fed possibly need to more than double their balance sheet over the next five years? If the crisis had passed, as we’ve been told by the mainstream media, politicians, and central bank academics, what possible reason would the Fed have for pumping heroine into the veins of the criminal Wall Street cabal?

The reason is quite simple. The Fed is owned and controlled by Wall Street. Do you need any more proof than knowing Helicopter Ben makes more ($300,000) from a sixty minute lunchtime speech at a Bank of America banker bacchanal than he made per year as Federal Reserve Chairman. The chart below provides the remaining proof. From the March low of 666, the S&P 500 went up by 200%, to over 2,000 when the Fed reluctantly ended QE3 on October 29, 2014. Do you think it was just a coincidence the Fed balance sheet also expanded by 200% since QE started in late 2008?

The mouthpieces for the oligarchy have contended this was all just a coincidence. They have been told to spread propaganda about fundamentals, economic recovery, job growth, and rising earnings per share. Is it also a coincidence the S&P 500 is exactly where it was on September 30, 2014 as the Fed stopped pumping heroine into the arms of Wall Street traders? The market went up 200% in five years, in virtual lockstep with the Fed balance sheet. The Fed balance sheet has been virtually flat for the last year and the S&P 500 is virtually flat in the last year. No correlation there. The mainstream media needs to distract you from seeing the truth. Look over there at Caitlyn Jenner. How about that Trump. Black Lives Matter. Time for fantasy football. Whatever you do, don’t look behind the curtain and realize the people running the Federal Reserve are corrupt, captured, and clueless on what to do next. 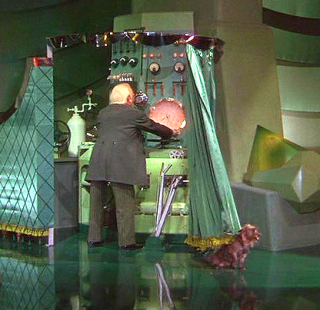 The Great and Powerful Fed has had the curtain pulled back to reveal a doddering old lady and a gaggle of flying monkey academics attempting to bluster their way out of the box they have created for themselves at the behest of their Wall Street owners. The global economy is in free fall and the Fed talking heads are still speechifying about a lousy .25% increase in the Fed Funds rate, as if it means anything to anyone in the real world of paying bills, going to work, buying groceries, and living life. Do these pompous pricks actually think a minuscule increase in an obscure interest rate will impact the average household whose real income is lower than it was in 1989? The gall of these academic pinheads is breathtaking to behold.

The only thing propping up our stock market over the last year has been the insane lemming like behavior of corporate CEOs across the land, borrowing at record low rates thanks to the Fed, and using the proceeds to buy back $2.3 billion of their own stock in order to “enhance shareholder value” and of course enrich themselves through their stock incentive compensation plans. Our market had also been seen as a safe haven by Chinese billionaires and rich Europeans seeking shelter from the storms sweeping across their continents. Last week’s stock market implosion will scare the CEO lemmings into halting their buybacks as they calculate the amount of value destruction they inflicted on shareholders, while the interest on the debt keeps rising.

You can be sure the discussions among the elite members of the Deep State – Fed central bankers, foreign central bankers, the heads of the biggest Wall Street banks, Treasury Department apparatchiks, Washington politicians, heads of the corporate media outlets, influential corporate CEOs, and powerful billionaires – are happening this weekend in an effort to keep their debt based ponzi scheme going. They know only one solution – print more money (QE4), increase government debt levels, fake the economic data, and utilize their propaganda outlets to calm the masses with more lies.

Can these desperate measures work again? Maybe temporarily, but their impact lessens each time they roll them out. They will never voluntarily abandon the addiction to credit expansion because it is the only thing sustaining the wealth of the Deep State. These sociopath arrogant egotists would rather destroy the world financial system than admit they were wrong. Ludwig von Mises explained what will happen many decades ago.

“There is no means of avoiding the final collapse of a boom brought about by credit expansion. The alternative is only whether the crisis should come sooner as the result of voluntary abandonment of further credit expansion, or later as a final and total catastrophe of the currency system involved.” –Ludwig von Mises