Economists, the Fed, and Wall Street define “inflation” to apply only to consumption goods, things we actually use and consume. Hence the name “Consumer Price Index.” The purpose of the CPI was never really to measure “inflation” however. Its purpose was to index government benefits and contracts. In the good old days, when people got cost of living increases in their paychecks, businesses also used it also to index wages. Younger workers today don’t know what that means. It’s ancient history.

The price of the roof over our head doesn’t count as a consumption good. When skyrocketing house prices caused government indexed pay and benefits to rise too fast in the late 1970s, the BLS stopped counting housing prices in 1982, coming up with the excuse that houses were not consumption goods.

Since then the BLS and the Fed considered housing an asset, and replaced house prices in the CPI with the made-up Owner’s Equivalent Rent (OER). That bogus stat is suppressed by a method which ends up with rent increases mimicking CPI in a circular process. So rents in CPI never rise at the actual rate at which they are rising in the marketplace. And the OER never comes close to the rate at which house prices are rising.

Economists don’t think that inflation is applicable to assets. Assets don’t “inflate.” They “appreciate.” So while “inflation” makes us mad when we go to the supermarket, we appreciate “appreciation.” Maybe not so much if we’re on the outside looking in, but if we own a house, hey! It’s all good!

As for the CPI measuring monetary inflation, which in recent years has been expressed ONLY in asset prices, like your house, that was never its intention.

The CPI does not measure the impact of monetary inflation. House prices do. Stock prices do. But not consumer prices. House prices rising 6% per year don’t count in “inflation.” Neither did the skyrocketing prices of stocks in recent years. In this case, too much money did not inflate the prices of consumer goods, because the money wasn’t going into consumers pockets. The “too much money” inflated stock prices. It inflated bond prices. It inflated house prices, because it went into the pockets of the people who had access to the printed money. That didn’t include the bulk of middle class consumers and everybody else with lower incomes. That fact has enabled economists to ignore inflation, or worse, think that it’s too low, and that the Fed just needs to print more money.

The Fed even goes a step further than CPI in its quest to ignore monetary inflation. It loves a measure called the Core PCE Price Index. which was just released today. As the Wall Street Journal put it, “Prices rose 0.2% over May, as measured by the personal consumption expenditures price index, the Federal Reserve’s preferred inflation gauge. Prices were up 0.3% from a year earlier. Inflation has now run below the Fed’s 2% target for more than three years.”

That’s because they’re not measuring monetary inflation. They’re measuring a narrowly defined basket of consumption goods which overweights the things that aren’t rising in price, and underweights or completely ignores the things that are. I won’t get into all the arcaninities that the Fed imposes to suppress that number. I’ll just show you.

Here are the Core PCE Price Index (excluding food and energy), Core CPI, Total CPI adjusted for actual rent increases, along with another measure of consumer prices that absolutely no one pays any attention to. That’s the Producer Price Index for Finished Consumer Goods Less Food and Energy. Let’s call it the Core Consumer Goods PPI.

The chart indexes those measures to the year 2009 when the Fed began QE and ZIRP in its effort to boost the markets and suppress long term interest rates. It shows the compound annual growth rates since then. In the past couple of years, the Fed has stated the desire to get “inflation” up to 2%. But the way the Fed measures “inflation,” they’ll never see that goal. In fact, the Core PPI Finished Consumer Goods Index, which isn’t manipulated and suppressed the way CPI and PCE are, has always been above 2%. 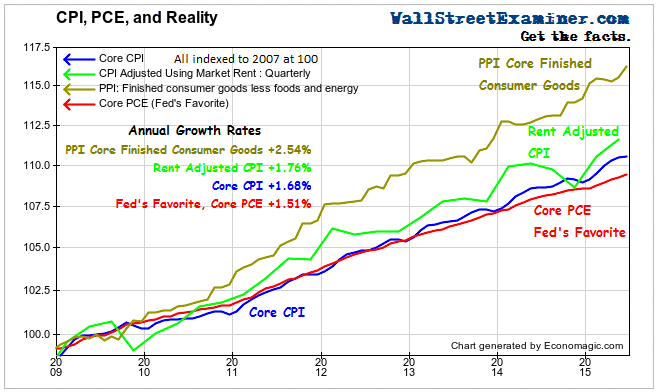 Below I show how consumer prices have fared over the past year, based on these measures. With the exception of the Fed’s favorite Core PCE, the other three measures have stuck around their 6 year growth rates. The Fed’s favorite measure grew more slowly, however. If the Fed had deliberately decided to follow a measure that would understate inflation, they could not have done better than this. Congratulations Fedheads!

As a consumer yourself, I’ll let you be the judge of which one is most accurate, based on your experience. Since this is a multiple choice question, I will add a fifth option.

If you selected number 4, or number 5 because you think they are all too low, then you must also conclude that the Fed is behind the curve in tightening credit.

We won’t even broach the subject of the charade of pretending to raise interest rates. How does a producer of a good, in this case, cash, raise its price when it has massively oversupplied the market with that good. As far as I know, if the Law of Supply applies, then the only way to do that is to reduce the supply of the good. And the only way for the Fed to do that is to start shedding assets from its balance sheet to extinguish the excess supply of cash on bank balance sheets. The Fed hasn’t started serious trial balloons on that thought yet, so it is not serious about raising rates or tightening credit. That means that the Fed will get even further behind the curve as time goes on.

If you think the commodity collapse will bring down consumer prices, think again. Even though the raw material cost is a tiny percentage of the cost of production, producers of consumer goods love this. It allows them to enjoy increased margins without engaging in the unseemly acts of raising shelf prices, or reducing the size of the packaging, which has been their sneaky way of increasing margins in recent years. One company, Tropicana Foods, has even come up with a way to water down its product by 50% and raise the price! The call it Lite Orange Juice. It’s light alright. Adding water will do that. This is just one example of the extremes consumer products companies will go to to raise, rather than lower prices, even when raw materials costs have been falling for a couple of years.

So while the BLS finds ways not to measure the rising prices of consumption goods, wages will continue to be sticky on the flat side and consumers will continue to see their purchasing power erode. The Fed is fiddling while the middle class burns. Eventually the financial markets will also begin to suffer from the squeeze on the middle class. “Eventually” was once far beyond the horizon, but we’ve been at this for a long time. It’s getting closer.

The post This Chart Shows How The Fed Fiddles On Inflation While The Middle Class Burns appeared first on The Wall Street Examiner. Follow the money! See and understand the liquidity flowing from the Fed, Treasury, and other major central banks and primary dealers as they impact markets in the Wall Street Examiner Professional Edition.