This Is Just the Beginning of the Great American Oil Bust

“This is going to be a painful period of time,” explained Texas Governor Rick Perry. The oil price plunge is going to make things “very uncomfortable” in the oil patch of Texas. There would be “a bit of belt-tightening in places,” and some areas would “have to make some changes,” he said.

His speech to a conservative forum on Friday in Austin made one thing clear: for Texas, the largest oil-producing state in the nation, the oil bust won’t be easy, even if seen from the perennially optimistic point of view of a politician.

It won’t be easy for any oil-producing state – or the country.

A few days ago, Helmerich & Payne, announced that it would idle 50 more drilling rigs in February, after having already idled 11 rigs. Each rig accounts for about 100 jobs. This will cut its shale drilling activities by 20%. The other two large drillers, Nabors Industries and Patterson-UTI Energy are on a similar program. All three combined are “likely to cut approximately 15,000 jobs out of the 50,000 people they currently employ,” said Oilpro Managing Director Joseph Triepke.

“They all know they’re staring down a cliff, they just don’t know how far it goes yet,” said Dave Anderson, an oilfield service and equipment analyst at Barclays on Friday, according to FuelFix. This year, spending on oil and gas drilling could plunge by $58 billion – or 30% – from last year’s $196 billion, based on a survey of 225 companies in the sector. But it could get even worse: Barclays conducted the survey over the past four weeks, and the price of oil has continued to drop since, and companies will adjust to the new realities.

The peak in the number of rigs drilling for oil, according to Baker Hughes’ data series going back to 1987, occurred in the second week of October last year, with 1,609 active rigs. At the time, it was already clear that the oil price plunge wasn’t just a temporary blip. But rigs are contracted for well in advance, and breaking contracts isn’t easy, and changing capital-expenditure plans takes time.

Then late last year, the rig count began to edge down. But on Friday, Baker Hughes reported that oil rigs dropped by 61 to 1,421 rigs. It was the largest week-to-week drop in the data series. In percentage terms (-4.12%), it was the largest drop since the Financial Crisis. When the rig count started plunging like this in December 2008, the stock market was crashing.

And yet, it’s just the beginning 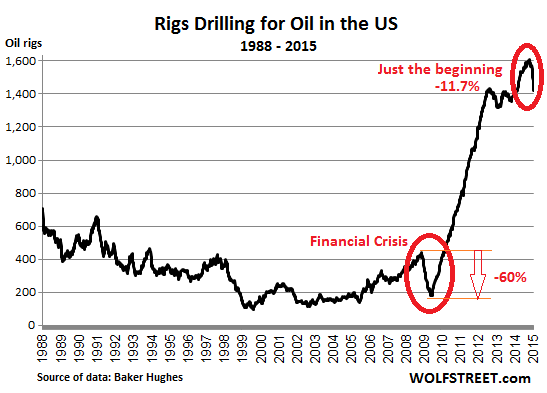 North Dakota, the second largest oil-producing state, lost 7 rigs last week. Its 162 rigs are also down 10.5% from its peak in mid-November.

Estimates vary widely as to how far the rig cutting will go. Barclays’ analyst Anderson estimated that at least 500 rigs could be idled in the American oil patch by the end of the year. Raymond James analyst Praveen Narra said that his firm estimated that up to 850 rigs could be idled this year. If 60% are idled, as was the case during the Financial Crisis, it would mean that 965 rigs would be taken out of service. Over the last 10 years, the oil and gas business in the US has become huge, and the unwind will be huge as well.

Yet, even as capital expenditures are getting slashed brutally, companies have not lowered their production forecasts.

And they won’t, at least not for a while; they’ll keep pumping at the maximum rate possible, especially now that revenues from unhedged production have been plunging – while the costs of servicing their mountains of debt have remained the same, and rolling over that debt has become a lot more expensive. Cutting back on exploration, drilling, and completion stems the cash outflow, but it doesn’t cut production, not until the decline rates of existing shale wells start making a visible dent into it.

So investors see blood in the streets. And it’s the signal. The four largest exchange-traded oil-related funds – including the largest oil fund, USO – had inflows of $1.23 billion in December, the most since May 2010, and $110 million during the first few days of January, Bloomberg reported. These investors are betting on a quick rebound of the price of oil. A sign that there isn’t nearly enough blood in the streets yet.

These folks are looking at what happened during the financial crisis, when oil plunged by 75% in half a year, but after the Fed started its QE program, the price of oil bounced off its low (along with stocks and nearly everything else) and formed a miraculous V-shaped recovery [read…. Oil Price Crash Triggered by the Fed? Amazing Chart].

The bet is that this may happen again. The Fed may start QE-4. Who knows to what lengths it will go in its efforts to inflate asset prices and transfer wealth! But if this oil bust is anything like classic oil busts, and the Fed sits on its hands, it may take years before this is worked out. Look at the price of natural gas: it has been below the cost of production at most wells for years – and production is still soaring! And that soaring production represses the price further.

In the end, oil goes from boom to bust to boom to bust, creating a lot of enthusiasm, hype, endless possibilities, and wealth for some on the way up, and leaving a lot of debris and anguish in its wake on the way down. The last time, the Fed stepped in. This time, it may not. Instead, the classic oil bust may play out in its drawn-out brutal manner.

And so, in the American Oil Patch and beyond, all heck is breaking loose as the “most reliable profit driver” has “abruptly turned sour.” Read… Oil-Bust Bloodletting: Projects Cancelled, Layoffs Ripple to Other Areas, Default Hits Private-Equity and Pension Funds