But there’s no reason to be complacent, the International Monetary Fund warns in its latest reports on global financial stability and the fiscal health of economies around the world.

“The passing of these near-term risks has seen volatility fall and equity prices in advanced economies rise,” says Peter Dattels, deputy director of the fund’s monetary and capital markets department. “But medium-term risks are building because we are entering a new era of challenges.”

An unprecedented era of ultralow interest rates and feeble growth has led to a record buildup in global debt levels. 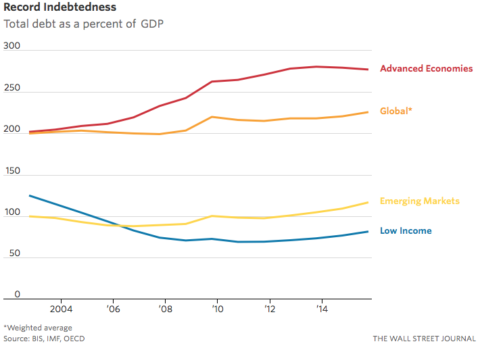 Anemic global growth is “setting the stage for a vicious feedback loop in which lower growth hampers deleveraging and the debt overhang exacerbates the slowdown,” the emergency lender warned.

The IMF lays out three major risks to the financial system.

First, European banks are facing a chronic profitability crisis. Many haven’t been able to clear the legacy debt off their balance sheets and investors are increasingly skeptical they’ll be remain profitable based on their current structures.

But it’s not just market perceptions. The IMF estimates that the recent plunge in bank equity price could curb lending until 2018. It also conducted a survey of more than 280 banks covering most of the banking systems in the U.S. and Europe to see if an economic recovery would be enough to propel them into long-term profitability. While a large majority of U.S. banks passed, nearly one-third of Europe’s banking system flunked.

“A cyclical recovery helps but is not enough,” Mr. Dattels says. Those banking duds—representing $8.5 trillion in assets—remain weak and unable to generate sustainable profits even if growth picks up in the fund’s stress test. “Banks and policy makers need to tackle substantial structural challenges to survive in this new era.”

Banks need to first resolve the massive stock of nonperforming loans. That requires banking authorities to fix their insolvency rules, a problem the IMF has been bugging Europe about for years. If officials could finally resolve that problem, it could turn a net capital cost to European banks of EUR85 billion to a net gain of EUR60 billion, the fund estimates. 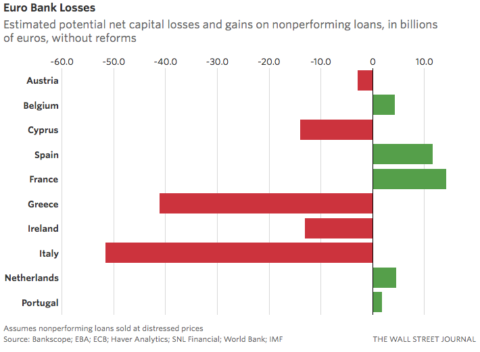 European banks also need to restructure to become more efficient. The fund estimates that since so many bank branches pull in only a tiny percent of total deposits, closing down one-third of the branches across the region and moving more clients to digital telling would cut operating expenses by $18 billion.

The front line for emerging-market risk is corporate debt. The combined shock of the commodity-price plunge and China’s surprise slowdown has made the surge in private debt a major threat to lenders and emerging-market economies more broadly. 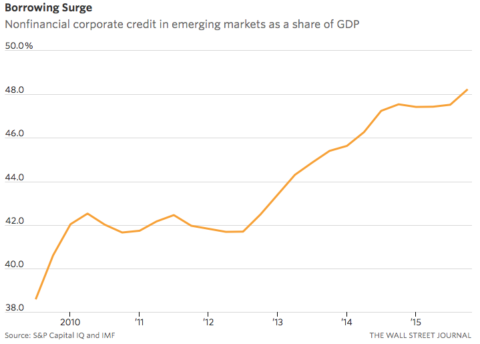 Although low interest rates in rich countries have bought many emerging market firms time to restructure their balance sheets, default rates are likely to rise, the IMF says. Many emerging markets need their financial systems to bolster their capital buffers to handle those losses, it warns.

The amount of debt at risk is already dangerously high in many countries, notably India, Brazil, the United Arab Emirates and China.  But that could rise perilously fast if things sour unexpectedly, such as a further commodity-price fall, a faster deceleration in China or U.S. interest rates picking up faster than forecast.

China’s debt levels make most emerging markets look like pocket change. Many economists, including at the IMF, say the government’s balance sheet is clean enough it could handle a shift of those liabilities from the financial sector in a crisis situation. But, even if that’s true, it doesn’t mean it won’t create havoc in the economy, causing a much steeper deceleration that could hit global growth. 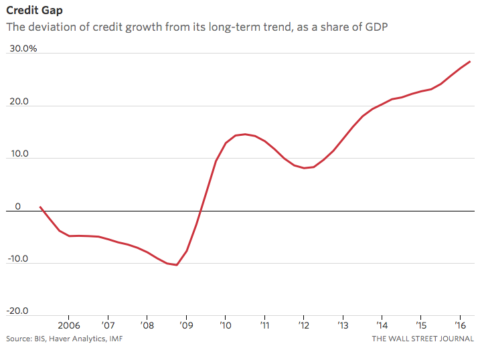 Authorities in Beijing say they are working gradually to bolster their financial system.