Time Bomb Ticking For the Great Bear Market Ahead

The Treasury Borrowing Advisory Committee (TBAC) is a committee of Primary Dealer bigwigs that works closely with the US Treasury to estimate the Treasury’s quarterly debt needs. Its recommendations are published every February, May, August, and November. This includes a schedule for the auctions in each quarter, giving us advance notice of what to expect.

It’s important because Treasury supply affects not only the Treasury market but also the stock market, as existing securities holdings are often liquidated to pay for and absorb the new supply. When Treasury supply is below recent levels, it tends to be bullish, because there’s less supply competing for investor dollars. I cover this in depth in the monthly Pro Trader Treasury Supply and Demand Report.

In this report we are interested in this issue primarily because a recent TBAC recommendation has spurred the US Treasury to withdraw hundreds of billions of dollars from the financial markets over the past couple of years. It has done so seeking to raise a cushion of cash for “contingencies,” particularly the looming debt ceiling problem

In 2015 the TBAC recommended that the Treasury build a “rainy day fund” of $500 billion for “contingencies.” The Treasury has been working toward that, hitting $440 billion in October before backing down slightly.

The Treasury extracts cash from the financial markets when it sells increased amounts of debt in order to add cash to that fund. Likewise, when it raises more cash than expected from taxes, it holds some of that cash to help build the contingency fund.

There has been some correlation between stock market performance and the Treasury adding cash to the market. It does so by paying down some of its debt. It usually does that when it has extra cash after quarterly and annual tax collections come in. Stock prices normally rise during those periods.

I had expected that the Obama Administration might use its cash pile to manipulate the economy and boost Hillary Clinton’s election chances. It did not do that. Instead, Treasury cash surged and the Treasury hit a new record in cash at over $440 billion in October. The Treasury spent some of that in November, but the amount wasn’t significant. The pattern has fluctuated throughout the past 2 years, and the November spend down wasn’t anything unusual. In fact, after the election the Treasury again started to rebuild its cash balance, pulling cash out of the system.

The chart below illustrates the loose correlation between the Treasury’s cash balance and stock prices.
Treasury cash is plotted as the blue line on an inverse scale. When the line is rising it means that the Treasury is injecting cash into the markets. This usually happens when, and just after, the Treasury collects quarterly estimated taxes, or full year taxes in April. The stock market tends to rally during those periods.

When the line is falling it means that the Treasury is pulling cash from the markets by selling more debt or holding on to increased tax collections. Those times typically coincide with periods when stock prices come under pressure. 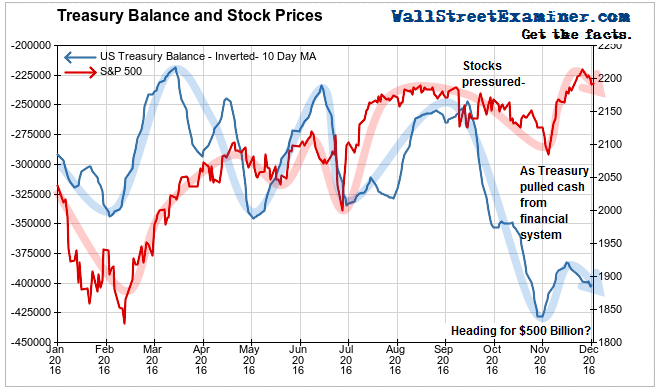 This is useful for purposes of estimating the stock market intermediate trend, but the long term trend has other drivers, which we cover in other reports.

The TBAC has forecast $390 billion in cash at year end. With the balance now at $400 billion it implies that there will be no additional cash pulled from the market for the remainder of the year. This means that there should be no pressure on the market from the Treasury pulling cash from the system for the rest of this month.

However, if the Obama Gang wants to go out with a bang, they could spend much of the money before Inauguration Day, leading to a market and economic blowoff early next year, but then leaving Donald Demento holding the bag.

If the Obama Chicago Mob hands the cash over to the New York Don, the big question is what happens when Trump takes office. If he chooses to immediately spend $300 billion in cash from this contingency fund, we could see an epic blowoff in stock prices and in the economy. That would be a one shot deal that would leave a vacuum that should mark the top of the market, and could lead to a crash.

But first things first. We need to keep a close eye on the Treasury’s daily cash balance for any sign of a change of direction.

This post is an excerpt from my Wall Street Examiner Pro Trader Reports on the factors that drive market liquidity. I first reported in 2002 that Fed actions were driving US stock prices. I have tracked and reported on that relationship for my subscribers ever since. Try these groundbreaking reports on the Fed and the Monetary forces that drive market trends for 3 months risk free, with a full money back guarantee. Be in the know. Subscribe now, risk free!