The Federal Government has continued to issue new debt despite the debt ceiling. It has done so by using its big pile of cash to pay down the debt it owes to Social Security and to government and military pension fund beneficiaries. That internal debt is included in the debt subject to limit. By paying down the internal debt, the government makes room to add to its public debt. It thus maintains a regular schedule of new issuance.

It has opted to do that instead of suspending debt issuance and using cash to pay regular outlays directly. By continuing to issue new debt to the market on its regular schedule, the government has fostered an atmosphere of normalcy. Markets have been orderly, with little volatility.

Thanks to a sizable increase in June tax collections, (See Federal Revenues report) the Treasury now appears to have enough cash to last until an October date with destiny. That’s when a very large payment is legally required to be made to the military pension fund. Furthermore, the October deficit is normally over $100 billion. There would not be enough cash to fund that without an increase in the debt ceiling.

In the near term, July would appear to present no problem. There’s plenty of cash to get through the month.

The Treasury may opt to reduce the size of the 4 week bill again. There would not be enough net new supply in July to pressure prices lower in the market.

In fact, the interest rate on the 4 week bill remains well below the Fed Funds target rate. It could drop even lower if the Treasury cuts the size of the 4 week bill offering again. It’s just more proof that a real, too big to manipulate money market, has too much cash. And it proves that the Fed cannot control market rates by increasing the interest that it pays the banks on excess reserves and Reverse Repos. That effectively eases financial conditions. It certainly does not tighten them and it does not raise the cost of capital to borrowers.

The markets are perfectly able to have a technical selloff in the short run, but while Treasury supply is modest such a selloff is likely to be brief. Moreover, the Treasury could elect to suspend issuance at any time. With no new Treasury supply coming to market to absorb normal investment cash flows, excess cash would balloon in the accounts of dealers and investment funds. That is what happened in 2015 in the last debt limit crisis. The markets went on a tear for the month that Treasury issuance was suspended.

That ended abruptly with a violent reversal and selloff in November of 2015. A similar scenario could easily occur this fall. This time it could coincide with actual Fed tightening when the Fed opts to begin demanding repayment of the government and mortgage debt it holds on its balance sheet. Instead of being a one month wonder, a selloff under those conditions could be the first leg of a bear market. 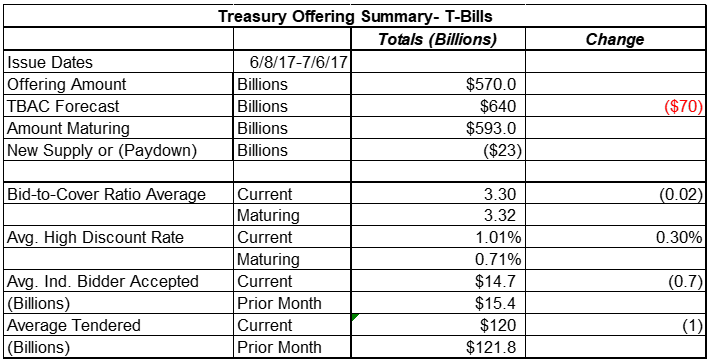 The Treasury paid down $23 billion in existing T-bills in the 4 weeks ended July 6. Paydowns put cash back into the accounts of erstwhile holders of the bills. This includes dealers, banks, and other institutions.

These market participants often redeploy some of that cash into longer term paper, equities, or short term paper in the secondary market. Paydowns are common in June because the government collects quarterly estimated taxes. Government revenues thus temporarily exceed outlays.

In months where there are large paydowns, particularly after April tax collections, this frequently pushes stock prices higher and interest rates lower. The effect is more muted in June because the paydowns are smaller.

The Fed raised the Fed Funds target rate to 1-1.25% on June 14. The 4 week bill rare is now at 0.94%, below the supposed interest rate floor set by the Fed. The 4 week bill has been persistently below the Fed Funds rate since the December 2016 rate hike. On July 5, the fake Fed Funds market traded at 1.16. Apparently, the Treasury markets where real trading takes place haven’t gotten the memo. 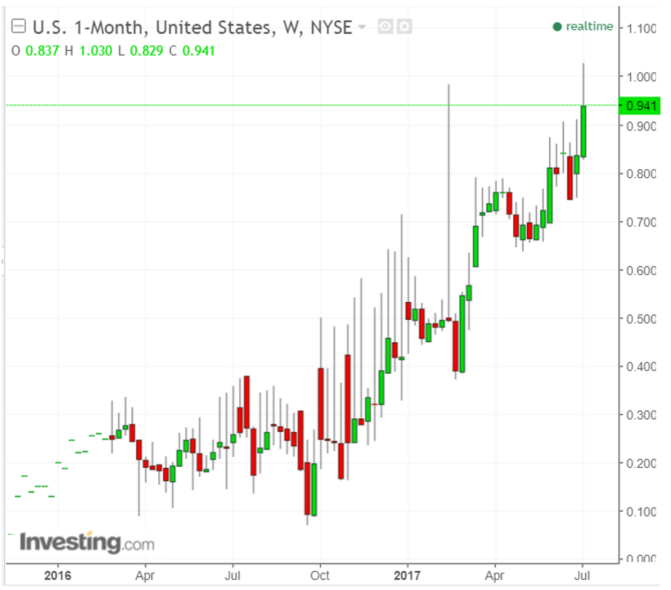 At some point before a debt ceiling deal is done, the Treasury won’t have enough cash to play the game of reducing internal debt. Then it will be forced to withhold new supply from the public auctions. Therefore, we still need to be prepared for the likelihood that later this summer an absence of new supply will leave dealers and investors flush with cash. It could spur a big rally.

That period would only be a few weeks at most until Congress decides to raise the debt ceiling. Supply will then come back in spades, pushing interest rates up dramatically. Stocks should sell off simultaneously.

After applying the paydown of $23 billion in bills, the net increase in all issuance for June was $54 billion. Yields have risen and stock prices have stalled because of the pressure of this increase in the supply of paper.

When the Treasury is finally forced to suspend new issuance because of the debt ceiling, dealers and investment funds will not find the supply of Treasuries that would normally absorb their cash flow. They will be faced with a cash buildup. They will deploy some of it into existing paper, including not just notes, bonds, and bills, but also equities. This will push prices up.

That will be temporary, until the debt ceiling is lifted and the Treasury floods the market with new paper to repay the money it borrowed internally and to rebuild its cash to normal levels. 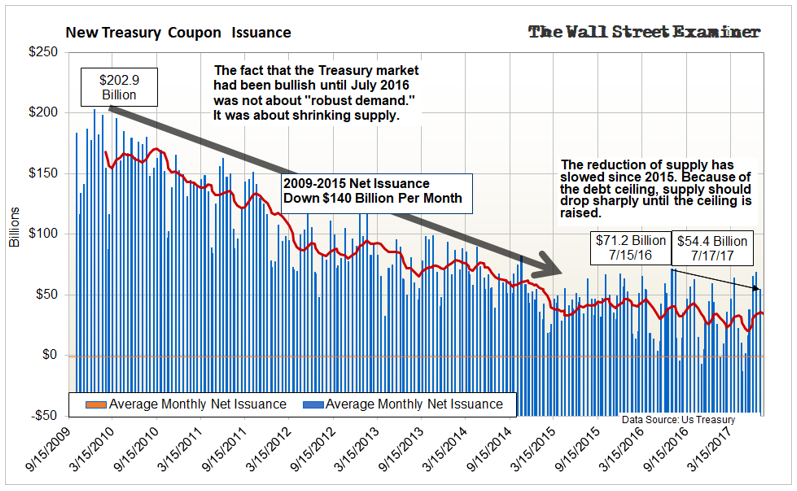 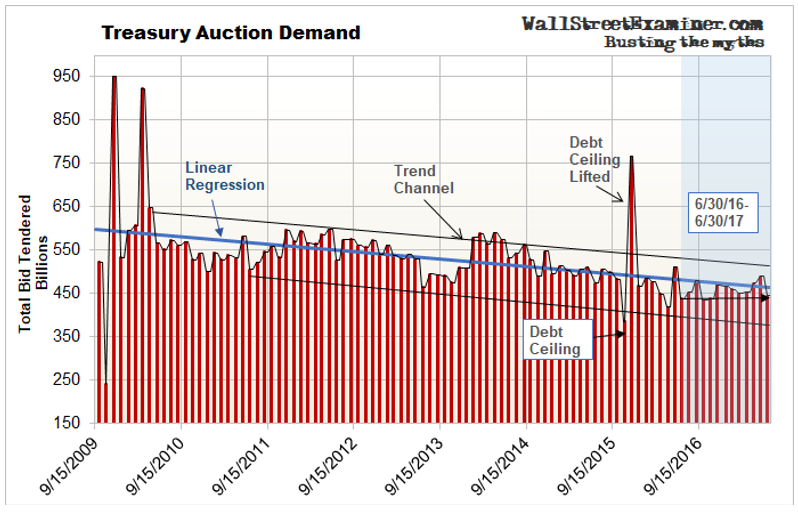 The Treasury has kept issuing new supply at near normal levels despite the debt ceiling. At some point in the next 2-3 months, the well of cash used to play that game will run dry and the Treasury will be forced to suspend new issuance. At that point, the markets would then be likely to rally because there will be a shortage of new supply.

The suspension of issuance will end when Treasury cash dwindles to near zero and default is threatened. Congress will do a deal to raise the debt limit. The Treasury will then flood the market with paper as it frantically moves to rebuild its cash and to repay the internal funds it had raided.

The market will get crushed if demand only remains stable. I can’t think of a reason why it would grow enough to forestall a big selloff in both bonds and stocks.