There was lots of economic news on Wednesday. We had Industrial Production, Retail Sales, and the Producer Price Index… Business Inventories, Crude Inventories, and Capacity Utilization. We had the Mortgage Application Index. But the most famous news of all, was the FOMC rate decision.

It wasn’t the most important news of all. That had only a little to do with Janet the red nosed Fed Chair. I’ll get to that real news in a moment.

But first, the number.

So today the Fed raised its target for the Fed Funds rate to 50-75 basis points. This is really a sham rate. There are still a couple trillion in excess reserves floating around the banking system. So the Fed can’t really control the Fed Funds rate by manipulating reserves like it did back in the good old days when it kept reserve levels tight.

The Fed Funds rate is the overnight rate for banks who need to borrow cash from other banks to meet their reserve requirement.

Since virtually all US banks have cash coming out the gills these days, they don’t need to borrow reserves from each other. The Fed simply cannot control rates that way. So it puts on a show instead, and as usual, everybody buys in.

A few foreign banks with US branches that are members of the Federal Reserve System, need money, but when they borrow, it’s more like a payday loan than ordinary financial market dealings. The borrowing banks pay the loan shark rate, which is really low right now, because the leg breaker lender gets pretty decent collateral in return for making the loan. That collateral is usually Treasuries.

The Fed Funds market has shriveled to around $45-50 billion a day. That’s down from around $350-$400 billion just before the Fed started inundating the banks with cash via QE.  How difficult is it to rig a market with $50 billion in daily volume? The US Treasury Market trades about $500 billion a day, and central banks have rigged that for years by printing money, no sweat.  The NYSE trades about… wait, I need to count the zeros…

What the Fed is really doing is making up an excuse to raise the subsidy that it pays the banks. That’s right, “subsidy.” The Fed pays the banks an outright subsidy through what’s known as IOER- interest on excess reserves. It also uses the sham reverse repo program. In that one the Fed gives the banks cash, supposedly in return for the banks transferring collateral in the form of Treasuries to the Fed.

The Fed pretends that by increasing those subsidies to 75 basis points, that this somehow means that interest rates that banks charge borrowers will go up. Now, here the Fed is giving more money to the banks, lowering their cost of funds, and that will somehow encourage them to charge their customers more?

Fat chance that will work.

But what it does do is reduce the Fed’s surplus coming back to the US Treasury every month. It’s usually around $6-7 billion, depending on the yields the Fed is getting on its bond holdings. When the Fed starts paying the banks more interest on their excess reserves at the Fed, it will reduce the Fed’s surplus and US taxpayers will get less of their money back. Instead, the bank executives will be stuffing their pockets with it. When do we get to hear their thanks, I wonder.

In addition to increasing the IOER subsidy to the banks, the Fed will also increase the interest rate it pays on the Reverse Repo scam, where the banks supposedly lend their excess reserves back to the Fed.

Remind me again what they did to deserve all that free money. Money that’s coming out of our pockets!

Now since the Fed was buying most of its bloated portfolio when yields were at rock bottom, it’s not much interest income given the size of the portfolio. And since the Fed isn’t buying any more bonds at the moment, its interest income won’t increase.  What possible justification does the Fed have for paying a bigger chunk of that to the banks, rather than back to us, the taxpayers?

It’s a ripoff of the American people.

Meanwhile today’s news wasn’t really news. We have all known that this rate increase was coming for months. The idea that this selloff was a sell the news event is ridiculous. It doesn’t work that way. The old saying is “Buy the rumor, sell the news.” First, the Fed rate hike was not a “rumor.” It was a foregone conclusion.

Secondly, the idea behind “buy the rumor” is that there will be GOOD news! An interest rate increase isn’t good news. Why would anyone buy the market on the rumor that interest rates will go up?

That’s ridiculous, prima facie. The idea is to buy the rumor of good news, and then sell when it actually happens. It’s not “buy the rumor of bad news and then sell the news when it happens.” That would be a case of “Sell the rumor. Buy the news.”  Somehow, the Wall Street media doesn’t even understand this simple concept.

Now that I have gotten all that off my chest, below is a chart of today’s most important news. The 10 year Treasury yield broke a 9 year trendline, and also broke the last high in this downtrend, set in 2015. This comes after a successful test of the low in yields made 4 years before in 2012. This could be, and probably is, a major trend reversal pattern. 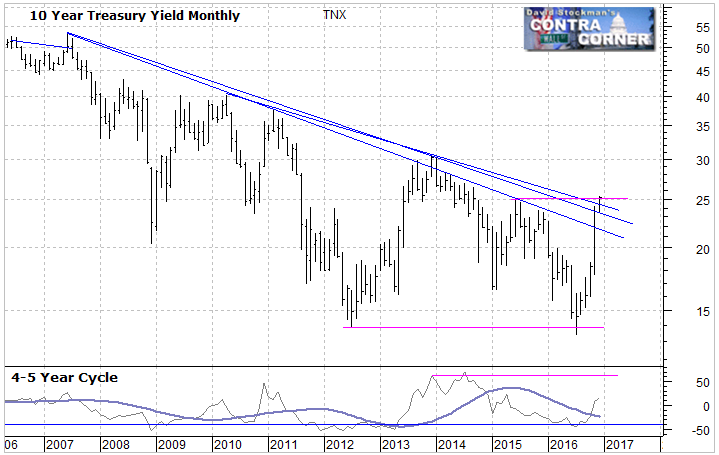 Before edging to this new high today, the 10 year yield  successfully tested a low set 4 years ago, and rallied from there.

There are actually 2 trendlines from the 2007 peak that were broken. Another trendline from the 2011 high in yields was also pierced. And by closing above 2.5%, the 10 year broke an important resistance level.

The move isn’t big enough to be conclusive. It might reverse in the short run, creating a false sell signal similar to the peak in 2013. At that time the 10 year briefly broke one of those fan lines from the 2007 high while also breaking a previous peak at the round number of 3.0%.

But there’s a key difference between the current move and that one. When that false breakout happened in 2013, the indicator at the bottom of the chart shows that the momentum of the 4-5 cycle was already extremely extended. It was well above the 2011 peak.

Now momentum is much lower. It started upward only a few short months ago in September. Both momentum and yield have a very good chance to go much higher in the months ahead. This means that bond yields will probably head for the next key level on the chart. That’s 3%. And it will mean even more pain for bond investors.

This is just one more piece of evidence that this would be a good time to cash out some of those longer term bonds in your portfolio. Take advantage of the Fed’s short term interest rate scam while the gettin’s good. If bonds rally a little first before yields head higher, don’t look a gift horse in the mouth.