Short term Treasury Bill interest rates have remained near their highs. That’s despite the Fed announcing a less tight monetary policy, and despite a big reduction in Treasury supply.

These are real, actively traded markets, so direct manipulation of phony rates like the Fed Funds rate are less of an issue here. We can see the reality of the stickyness of high rates, that are likely to go even higher in a few months.

Note: This report is an excerpt from Here’s How Light Treasury Supply In April and May Create Selling Opportunities in Bonds and Stocks. Get 15% off if you subscribe today.

T-bill rates have been rangebound near the highs since December. The market hasn’t budged despite the widespread belief that the Fed will cut rates. The Fed will reduce its bloodletting rate from $50 billion to $35 billion per month in May, and will end the program in September.

“Bloodletting” is my name for the Fed’s balance sheet “normalization” program. It’s like medieval bloodletting because it drains cash, the lifeblood of the markets, from the financial system.

In addition to the expectation that the end of normalization will ease financial conditions, Treasury supply has been lighter than usual in March and April. That should have taken some pressure off the money markets, allowing rates to fall. But it hasn’t. 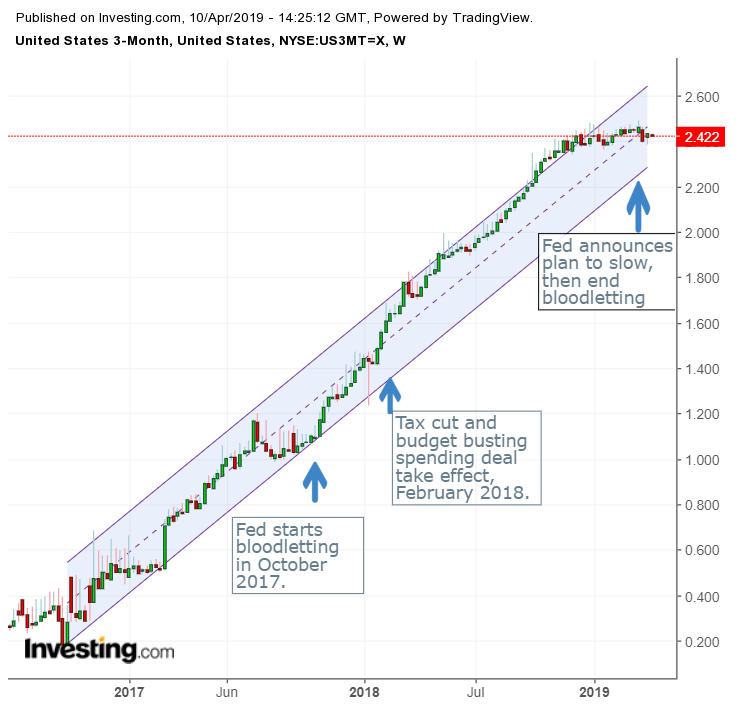 Those paydowns should goose all the markets for a day or two. When the Treasury pays down maturing bills, the erstwhile holders of the bills get cash back, in lieu of rolling over the bills. The paydown of the bills creates a temporary shortage of them in the market. There’s more money chasing few T-bills. The interest rates on the T-bills should come down. But they have not, at least not materially.

Instead, Money Has Rolled Into Stocks and Bonds

The TBAC forecast optimistically calls for more paydowns through the end of May. The forecast expects $23 billion of bill paydowns in the last 2 weeks of April, then $102 billion in paydowns in May. That will be countered by the expected $39 billion in net coupon supply at the end of April and $99 billion in May.

Meanwhile, the TBAC forecasts relatively light supply in June as well. There’s no third quarter forecast yet. Normally the rubber hits the road in the third quarter. That’s when Treasury supply usually explodes to its highest levels of the year. It’s when the markets will be most vulnerable. In the full report at Lee Adler’s Liquidity Trader, I tell you what to do about it.

Get the full report right now and read Lee Adler’s Liquidity Trader risk free for 90 days! Satisfaction guaranteed or your money back. Subscribe by 11:59 PM Pacific Time, April 11 and get 15% off the published price. Applies to the initial price and all renewals. Price will be adjusted after order completion.