For several months I have been warning that the debt ceiling would cause the issuance of net new Treasury supply to cease, and that could cause a meltup in the markets. That’s what happened in the last debt ceiling impasse in 2015, and that’s what common sense tells us should happen if the Federal Government cannot, by law, increase its total debt.

Or so I thought.

I had concluded that the expected lack of supply would be bullish for stocks and bonds in the short run just like the last time. Money is still being created and pumped into the world banking system, mostly by the ECB and BoJ. Normally, dealers, banks, and investors would buy US Treasury securities with some of that money. Theoretically, with no new Treasuries available, these dealers, banks, and investors would need to buy existing securities in the secondary market. This would bid up their prices and push yields down.

That has happened, but not for the reason we thought, and not to the extent that it would have, had there been no new Treasury supply as expected. That is still possible, or even probable, but it will take more time to get there.

After poring over the Daily Treasury Statements from several different dates, I discovered how the financial rocket scientists at the US Treasury played a trick on us!

The total debt subject to limit has two components: public debt, and intergovernmental debt. That’s where the Treasury, hungry for cash,  played games.

Most of that intergovernmental debt is money the Federal Government has borrowed from the Social Security Trust Fund. The Treasury can reduce the amount it owes the “Trust Fund” by crediting the Treasury’s cash account. With that debt reduced, voila! The Treasury has room under the debt ceiling to issue new public debt. And it has done so on the normal schedule, as previously estimated by the TBAC.

Cash has been falling rapidly as the government reduces its debt to the SS Trust Fund. Within about 3 months the cash will run out and that game will end. It might not take that  long.  When that day arrives, the Treasury won’t be able to pay down the Social Security Trust Fund any more. It will have no choice but to stop issuing new debt. The Treasury will then be forced to raid its internal accounts for more cash. If there’s none left, the crisis then reaches its flashpoint.

We do not know how long it can continue to borrow from government employee pension funds to pay usual government outlays. But during that period the markets could rally just like they did under the debt ceiling impasse.

Sooner or later, probably by October 2 when a large military pension fund payment is required by law, a deal to raise the debt limit will get done. The government will then return to the market. It will do so with a vengeance as it raises hundreds of billions of dollars to pay back the money it raided from internal accounts. That’s when the sheet will hit the fan. We need to be prepared for this.

Here are the particulars.

The Treasury borrowed $24 billion in net new bill supply in the 4 weeks ended June 7. How is that possible if the government is up against the debt ceiling? Part of it was enabled by big debt paydowns in the mid-April-May period. But the rest of it was bookkeeping trickery.

This year, with the debt ceiling in place, additional borrowing was not supposed to happen. I had built that “fact” into my forecasts for stocks and bonds. While the forecast has been right, it was right for the wrong reason.

New Treasury debt supplied to the market was not reduced! The Treasury has been using its cash and extra revenue when available to reduce debt subject to the legal limit, outside of the usual weekly auctions. It is doing so by debiting cash and crediting the debt it owes internally to itself, which is mostly the Social Security “Trust Fund.” This allows the Federal Government to continue to issue new supply of bills, notes, and bonds at the weekly auctions without going over the debt limit.

Had they not done so, Treasury debt would be paid down each week as new net borrowing would have been impossible. That would have fostered an outright meltup in stock and bond prices.

Instead, of an increase in demand, in T-bill auctions over the May 18-June 7 period, the average bid to cover ratio fell from 3.53 on the maturing bills to 3.13 on the new bills. The average bid tendered slipped from $125 billion per auction in April-May to $122 billion in May-June. The average discount rate rose from .65 basis points on maturing bills to .93 on new bills. Here’s a chart of 4 week bill rates. 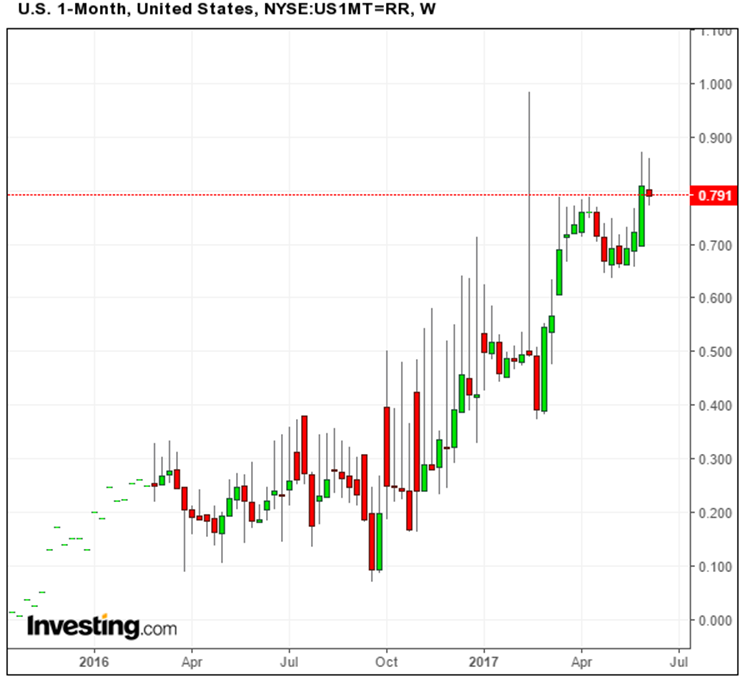 The Treasury’s cash account has now sunk to $155 billion from $169 billion at the beginning of June. That was $88 billion less than a year ago. The Treasury had a huge haul from April tax collections but May was a different story, as withholding tax collections plunged.

Quarterly tax collections are due on June 15 for individual non-withheld and corporate taxes. That will bring in some cash and enable the Treasury to continue to credit its Social Security Trust Fund liability and allow for new public borrowing.

We’re not out of the woods however. At some point before a deal is done, the Treasury won’t have enough cash to play the game of reducing internal debt. Then it will be forced to withhold new supply from the public auctions. Therefore we still need to be prepared for the likelihood that later this summer an absence of new supply will leave dealers and investors flush with cash.

That period would only be a few weeks at most until Congress decides to raise the debt ceiling. Supply will then come back in spades, pushing interest rates up dramatically.