While the US has been struggling for five years with a recovery that has been so crummy that “recovery” often shows up in quotation marks, Canada has been rolling in good times. Its economy has been powered by a housing bubble beyond even US imagination.

I wrote about that phenomenon in April:

The gap between Canadian and US home prices is at an all-time record, with the average price in Canada now 66% higher than the mean price in the US. Even when prices are adjusted for fluctuations in the exchange rate … Canadian homes are still 50% more expensive than the already expensive US homes. What gives?

I included an eye-popping chart, going back to 1999, that compares US home prices, which have been soaring recently, to the totally out of whack prices in Canada. For more, read….  Canadian home prices make the torrid excesses of the US housing bubble look banal.

Housing bubbles – that is, construction bubbles – give economies a terrific boost as they reach a crescendo because hiring and purchasing are so local and cannot be outsourced. They’re job-intensive, non-automated activities requiring manual labor by skilled, well-paid people. And they impact numerous facets of the economy. Materials and supplies need to be purchased. Dealers sell more pickups. Restaurants sell more lunches. Lumberyards are busy. Tools need to be replaced. Equipment dealers and rental companies hit homeruns….

But when construction slows, that terrific boost turns into an even more terrific bust. Jobs evaporate overnight. Purchasing slows or stops. And very quickly, the overall economy gets hit.

Housing bubbles are invariably caused by cheap money. Central bankers deny that, and they refuse to see these or other bubbles, and even if they see them, they refuse to acknowledge them. But unlike stock market bubbles, which are merely unpleasant when they pop, housing bubbles are dangerous. They implode with pandemic force that reverberates harshly down Main Street.

The US housing bubble, when it imploded, generated enormous job losses, tore up the financial sector, and helped bring the economy to its knees. Is Canada next?

Its even more outrageous housing bubble is at risk. This truly ugly chart (via OtterWood Capital Management) depicts growth in hours worked (blue) and annualized GDP growth (brown). On a quarterly basis, they track with a fair amount of correlation. While the magnitude may be off, the direction is almost always the same. Only twice since 2007 has one or the other been negative, when its counterpart was positive.

But in the second quarter, hours worked plunged by a rate not seen since the middle of the Great Recession: 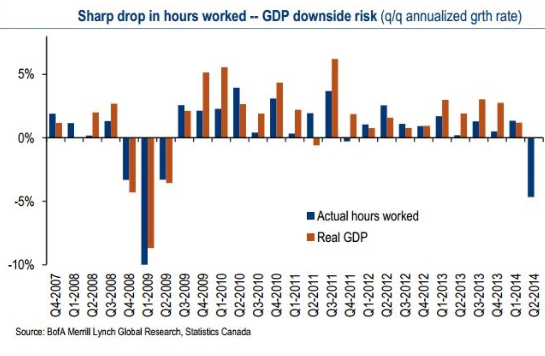 Second quarter GDP hasn’t been reported yet. But if hours worked are any indication, it faces a steep downside risk. And when Canada’s magnificent housing bubble implodes, it will be difficult to find cover.

But don’t tell the Canadian stock market. The one-year chart of the Toronto Stock Exchange Index is a slightly jagged line going from the lower left-hand corner diagonally across the chart to the upper right-hand corner, just like the S&P 500, in its relentless daily pursuit of new records, come heck or high water. Another indication that worldwide central-bank gyrations are the only thing that matters – at least for now – and that reality, no matter how ugly, isn’t even on the radar anymore.

In the US, housing too is causing ripples once again. Mortgage bankers are already fretting about consumers returning to “reckless borrowing,” according to a survey by FICO. “That doesn’t feel like a healthy, sustainable growth situation,” the report pointed out. Read….  Mortgage Bankers: “Unsustainable Housing Bubble Is Inflating”