Like Reagan in 1980, viewers saw a Trump who was better than the liberal talking points. 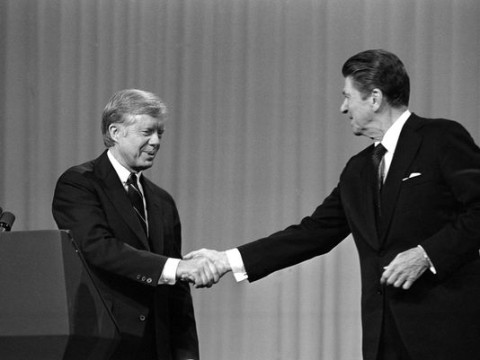 You can’t fact check leadership, and tonight Donald Trump showed himself a leader.

In the run-up to the Hofstra presidential debate, the Clinton campaign mounted a concerted effort to make fact-checking the centerpiece of the event. Campaign manager Robby Mook argued that “it’s unfair to ask that Hillary Clinton both play traffic cop with Trump, make sure that his lies are corrected, and also to present her vision for what she wants to do for the American people.” Mook said that if Trump “lied,” it was moderator Lester Holt’s responsibility to point that out.

Fact-checking has never been an accepted role for debate moderators. Janet Brown, head of the Commission on Presidential Debates, said that a moderator should not “serve as the Encyclopedia Britannica.” And moderator Candy Crowley’s ill-advised intervention against Mitt Romney in 2012 showed why fact checking on the fly is a bad idea.

It was strange that the truth-challenged Clinton would want to make an issue of facts. But there was certainly no shortage of checking. Veteran debate moderator Bob Schieffer said that “the chief fact-checkers are the candidates,” and Clinton and Trump agreed, vigorously challenging each other over facts, policies and opinions. In addition, the social media hive-mind was scrutinizing every word in real time. Anyone who needed to track down a fact had the entire connected world at their disposal.

POLICING THE USA: A look at race, justice, media

Even in the pre-internet age, moderators did not see themselves as real-time arbiters of the ground truth. There were five journalists on the stage in October 1980 during the debate between Democratic President Jimmy Carter and Republican challengerRonald Reagan, and none of them felt compelled to question the facts. Carter and Reagan took care of that. Fact checking was the occasion for Reagan’s memorable comment, “there you go again,” when he was taking exception to Carter’s representation of his views on Medicare.

Overall, Carter kept Reagan on the defensive, and the president probably won on points. However, Reagan’s affability and easy manner wore well against Carter’s stern lecturing. Reagan did not come off as the cartoonish, conservative cowboy of Democratic talking points. The Lowell Sun observed, “Ronald Reagan had not self-destructed. He had not made any ill-advised statements that were clearly foolish, as Carter had hoped. Reagan appeared calm under Carter’s attack. With his polished stage manner, he went a long way in presenting himself as presidential timber.” Many Americans agreed. A Gallup poll two days before the debate showed Reagan trailing Carter 39% to 47%. A week later, Reagan won the election 51% to 41%.

The same words could apply to 2016. Donald Trump did not self-destruct, he did not make foolish statements (whether you agree with him or not), he gave as well as he got. And despite Clinton’s numerous mocking remarks to the contrary, he came off as presidential. And that’s a fact.

James S. Robbins writes weekly for USA Today and is the author of Native Americans: Patriotism, Exceptionalism and the New American Identity.

You can read diverse opinions from our Board of Contributors and other writers on the Opinion front page, on Twitter @USATOpinion and in our daily Opinion newsletter.