Trump Spent $84 Billion In February To Goose Market and Economy

Barack Obama left a big gift for Donald Trump on Inauguration Day. It was the gift of cash, $382 billion in the account of the US Treasury, to be exact.  That was, by far, an all time record for that date.

Of course Barack did not intend to hand that over to Donnie. The Obama Administration had built up that pile of cash in the anticipation of the crowning of Queen Hillary for her to shower on her subjects. Obama inadvertently handed a big can of gasoline and a pack of matches to a pyromaniac, and boy did he burn it.

That cash buildup had been under way since 2014. At that time the TBAC (Treasury Borrowing Advisory Committee) advised  the Federal Government to build a “rainy day fund” just in case.  The TBAC is a committee of Primary Dealers who advise the government every 6 weeks on how much debt to sell and when. They give the Treasury a detailed schedule of how to fund the shortfall between government revenues and expenses, aka the budget deficit, each month. Most of the time, the Treasury adheres to that schedule pretty closely.

We all know that the real purpose of the “rainy day fund” was to build a cash cushion for the return of the debt ceiling scheduled for March 15, 2017. Nice plan. All it would ever do would be to delay the day of reckoning. Politicians never decide anything until their backs are against the wall as they face a firing squad. With all that cash, the day of reckoning could have been delayed until November or December. But most of it is now gone.

But I digress. The Treasury followed the TBAC suggestion and spent the next 2 years building a massive cash hoard. Last October it had reached $440 billion. The Obama Administration spent a wee bit of that to boost the economy  to help get H elected. That failed. S0 on January 20, the chagrined Obama Gang handed that enormous pile of money over to the new Don.

As of March 1, 2017, the Treasury’s cash balance of $148.4 billion was $84.1 billion less than on the same date in 2016. That’s a huge year to year decline. Earlier, as of February 2, 2017, the Treasury’s cash balance had declined by $13.1 billion year to year. It was the first year to year decline since 2014.  The Trump Administration has apparently decided to go on a spending binge with that Treasury cash. This will shorten the grace period before the government runs out of money after the reimposition of the debt ceiling on March 15. 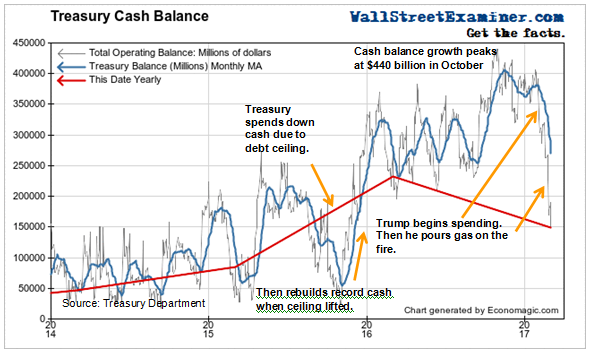 The cash buildup which the TBAC had recommended in 2015 to create a “rainy day fund” has turned into a cash cow for Trump. The Trump gang wants a debt ceiling showdown with Congress sooner rather than later, thinking as usual that they hold a winning hand and can run the table. My guess is that Trump is again overestimating and overplaying that hand.

Trump began the massive spend down of Treasury cash as soon as he took office. The amount and velocity of that spending has been unprecedented. When a government pours $84 billion in extra cash into a market and an economy in the space of a month, things happen. One of this things is a meltup in stock prices.

February is usually a month of big net borrowing by the Treasury. Buyers of the debt often need to fund the purchases by liquidating other financial assets. Bond yields may rise and stock prices often fall in February as a result. But this year in February the Treasury did not do any new net borrowing. It funded tax refunds straight from its cash kitty. Without the usual Treasury supply, and with the pumping of cash refunds into consumer and investor accounts, stocks took off and the economy got an artificial goose. 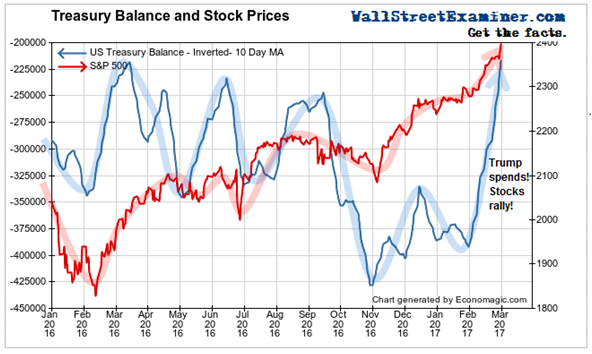 At this rate it won’t be long until the Treasury runs out of cash, especially with the reimposition of the debt ceiling on March 15. At that point the goose may be cooked. However, debt moratoriums have been bullish for stocks and bonds because there’s no new supply coming on to the market leaving investors and dealers increasingly flush with cash until the normal flow of new Treasury supply returns. So we need to be wary of a possible suspension of Federal debt issuance as an additional artificial boost to the stock market bubble. Once that’s done, it should be game over. I would expect a rapid, and possibly catastrophic deflation of the raging asset bubbles in most areas.

Meanwhile, withholding tax collections fell in February after hitting the usual upper limit of the 3-4 month withholding tax collection cycle in January. This cycle is not seasonal. The comparison is same time year to year rate of change. The waves vary in timing and amplitude, and have a slight variance in duration. They reflect the normal short term fluctuations in the economy. In terms of the bigger trend, there’s no sign of change yet, but given the conditions described above, it’s coming. 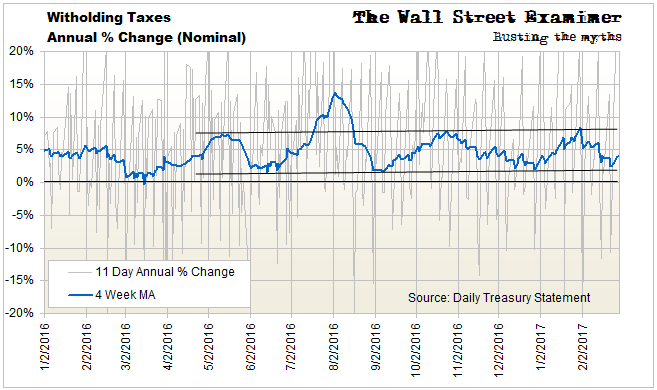 Withholding taxes stand alone in signaling that the economy is growing. Excise taxes and corporate and individual income taxes have all been contracting for the past 6 months. Taking their cues from the stock market, employers are always the last to get the news. Employment data will be a lagger in showing the downturn in the economy.

Lee first reported in 2002 that Fed actions were driving US stock prices. He has tracked and reported on that relationship for his subscribers ever since. Try Lee’s groundbreaking reports on Federal Revenues, Treasury Supply and Demand, along with the Fed and the Monetary forces that drive market trends. Click here for for a 3 month, risk free trial subscription, with a full money back guarantee. Be in the know. Subscribe now!