Big health plans stung by losses in the first few years of the U.S. health law’s implementation are seeking hefty premium increases for individual plans sold through insurance exchanges in more than a dozen states.

The insurers’ proposed rates for individual coverage in states that have made their 2017 requests public largely bear out health plans’ grim predictions about their challenges under the health-care overhaul.

According to the insurers’ filings with regulators, large plans in states including New York, Pennsylvania and Georgia are seeking to raise rates by 20% or more.

In states such as Florida and Maryland, insurers are seeking to raise premiums by percentage averages that are markedly above 10%. Among those that have published so far, only in Vermont do big insurers’ requests fall below 10%.

Proposals still have to be approved by state regulators, and a full picture of final approved rates across the entire country likely won’t be known until shortly before HealthCare.gov and state equivalents reopen for the law’s fourth main enrollment window on Nov. 1.

Nonetheless, the proposed average increases that are available are a vivid indicator this year of how insurers are adapting to the 2010 Affordable Care Act’s transformation of the way health coverage is priced and sold in the U.S. 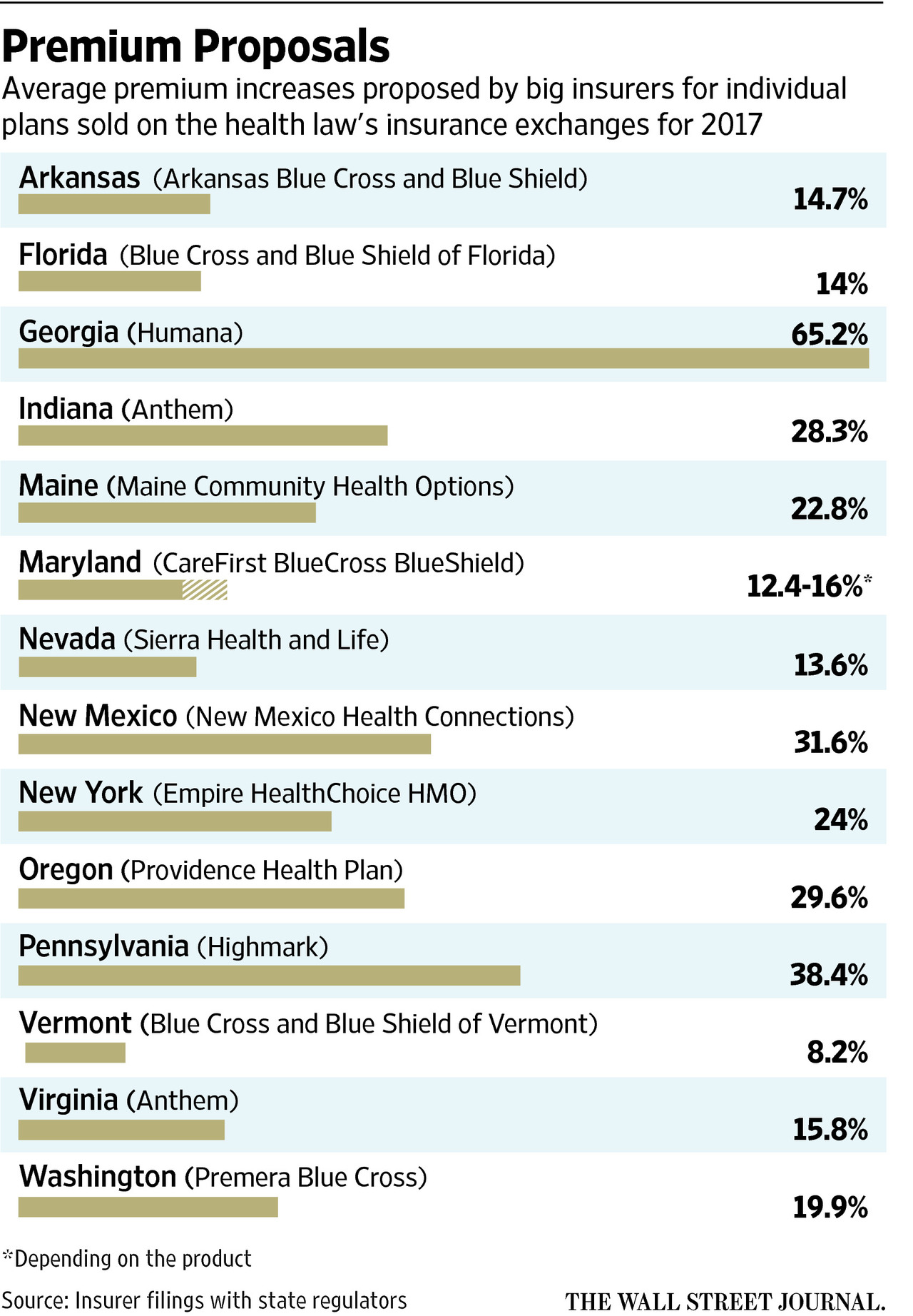 Making coverage available to everyone regardless of medical history, at the same price and with limited variation based on age is one of the most popular provisions of the law. But it also has increased the cost of insurance for many healthy people, causing a quandary for insurers who are trying to encourage people with cleaner bills of health to buy coverage and offset the costs of sicker enrollees.

The Obama administration had braced for a turbulent time as the full impact of the first few years of the law took hold. Analysts—and some insurers—had warned of heavier-than-expected costs from covering a population that turned out to be sicker than they expected, and many had anticipated that rates would have to rise as a result.

The carriers also project 2017 to be a particularly difficult year as some programs designed to cushion insurers’ losses end. Highmark Inc., a big insurer in three states, is suing the federal government over a shortfall in payments under one such program, known as risk corridors. On Wednesday, Pennsylvania regulators released requests for premium increases, including a filing from Highmark seeking to raise individual plan rates by an average of 38.4%.

Humana Inc. HUM -0.84 % is providing an extreme example of the rocky road seen by insurers that say they want to continue to sell coverage through the law’s exchanges, if possible. The insurer said it was asking for increases ranging from 28% to 70% for its various individual health plans in Georgia; the average requested increase that appears on the company’s filing with state regulators is 65.2%.

“Those proposed rates reflect many changing factors in the market, but are primarily driven by changes in expected claims costs that reflect the rising cost of medical services, changes in Humana’s contracts with hospitals, physicians, and other health-care providers, and increased use of medical services by Humana members, as well as the expiration of the temporary federal reinsurance and risk-corridors programs,” said Tom Noland, a company spokesman.

Federal officials say many consumers who buy coverage through online exchanges such as HealthCare.gov or state equivalents won’t feel the full impact of premium changes, because they also get a federal subsidy that is pegged to their income and the cost of insurance in their area.

“Americans will continue to have affordable coverage options in 2017,” said Kevin Counihan, the CEO of HealthCare.gov. “Proposed rates aren’t what most consumers actually pay. The vast majority of consumers qualify for tax credits that reduce the cost of coverage below the sticker price, and people can shop around and find coverage that fits their needs and budget.”

Obama administration officials are also hoping that state insurance regulators will review the rate proposals and force insurers to lower those that can’t be justified.

Arkansas Insurance Commissioner Allen Kerr said Tuesday that he didn’t believe that requests in his state, which include a 14.7% proposed average increase from Arkansas Blue Cross and Blue Shield, met that requirement.

“At this time, with the information we have on hand, including historical patterns, Gov. Hutchinson and I do not believe there is substantive justification for these rate increases,” said Mr. Kerr, who was appointed by Asa Hutchinson, a Republican. “For that reason, we expect to take action to deny the requested rate increases until there is sufficient justification to properly consider any rate increase.”

Arkansas Blue Cross and Blue Shield said it believed its filings were actuarially justified by documentation the company had submitted.

Other insurance commissioners have warned, however, that they won’t be able to deny increases where the insurer has shown a need, adding that they are required by law to ensure plans have sufficient funds to pay out claims.

The New Mexico Health Connections co-op is seeking a 31.6% average rate increase, though another big insurer there, Molina Healthcare Inc., MOH 1.90 % is only looking to raise rates by an average of 3.8%.

The co-op’s CEO, Martin Hickey, said the request was based in part on its awareness that it might be forced down in the state’s unusual two-stage review process. “That’s to absolutely protect ourselves,” he said. “We know we get another shot.”

But he also said that the proposal reflected significant concerns about the plan’s initial experience under the law—such as awareness that young, healthy people hadn’t signed up in numbers as large as had been hoped.

It’s a little bit of fear of the tilting of the pool towards adverse selection,” he said, acknowledging that higher rates could further deter low-risk enrollees. “I get that, and part of the problem is figuring out where’s the sweet spot on that in terms of still being affordable.”

Consumer groups are rallying to push commissioners to use their powers to block excessive rates. Antoinette Kraus, director of the Pennsylvania Health Access Network, said she wanted the commissioner in her state “to actively balance the needs of insurers’ financial health and solvency with consumers’ needs for quality plans.”