By Theo Francis at The Wall Street Journal

Quarterly profits and revenue at big American companies are poised to decline for the first time since the recession, as some industrial firms warn of a pullback in spending.

From railroads to manufacturers to energy producers, businesses say they are facing a protracted slowdown in production, sales and employment that will spill into next year. Some of them say they are already experiencing a downturn.

“The industrial environment’s in a recession. I don’t care what anybody says,” Daniel Florness, chief financial officer of Fastenal Co., told investors and analysts earlier this month. A third of the top 100 customers for Fastenal’s nuts, bolts and other factory and construction supplies have cut their spending by more than 10% and nearly a fifth by more than 25%, Mr. Florness said.

Caterpillar Inc. last week reduced its profit forecast, citing weak demand for its heavy equipment, and 3M Co., whose products range from kitchen sponges to adhesives used in automobiles, said it would lay off 1,500 employees, or 1.7% of its total, as sales growth sagged for a wide range of wares.

The weakness is overshadowing pockets of growth in sectors such as aerospace and technology.

Industrial companies are being buffeted on multiple fronts. The slump in energy prices has gutted demand for drilling equipment and supplies. Economic expansion is slowing in China and major emerging markets such as Brazil, which U.S. companies have relied on for sales growth. And the dollar’s strength also has eroded overseas profits.

The drag on earnings and sluggish growth projections for next year come as the Federal Reserve considers raising interest rates for the first time in nine years, and could add momentum to those in favor of postponing any rate increase until next year.

Profit and revenue are falling in tandem for the first time in six years, with a third of S&P 500 companies reporting so far. Analysts expect the index’s companies to book a 2.8% decline in per-share earnings from last year’s third quarter, according to Thomson Reuters.

Sales are on pace to fall 4%—the third straight quarterly decline. The last time sales and profits fell in the same quarter was in the third period of 2009.

At some companies, foreign-currency effects hurt results significantly. Consumer-products maker Kimberly-Clark Corp. predicted that currency swings would slash earnings by 25% this year, while Johnson & Johnson said that the dollar’s moves would reduce sales growth by almost 7 percentage points this year, even without further fluctuations.

This week, another third of the S&P 500 are expected to report their results, including such giants as Apple Inc., United Parcel Service Inc. and Exxon Mobil Corp.

Much of the anticipated decline stems from the hard-hit energy industry, where sales are expected to drop by more than a third from a year earlier and profits are likely to plummet 65%, Thomson Reuters says, based on analysts’ estimates. Basic-materials companies face a 17% drop in profits, and industrial sales are expected to decline more than 5%. 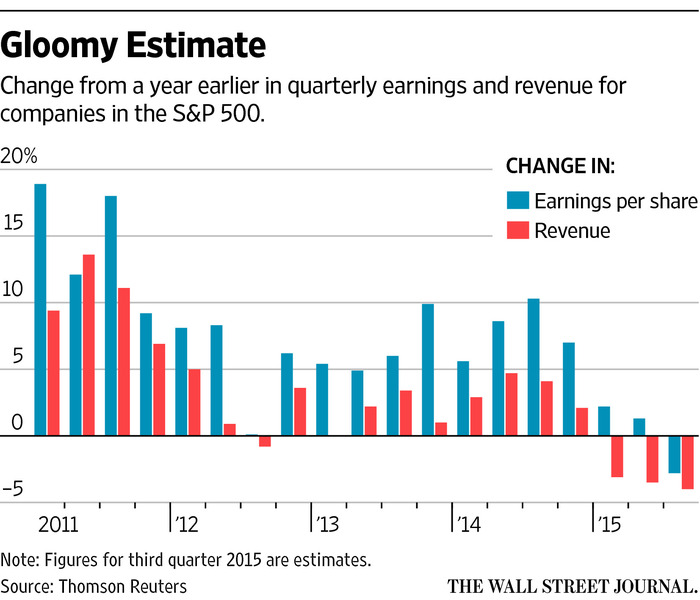 United Technologies Corp., which makes Otis elevators and Carrier air conditioners, said it expects profits to be flat or down in three of its four operating segments next year, despite strength in its U.S. operations. Chief Financial Officer Akhil Johri told investors last week that the Otis division’s sales in China fell 19% in the third quarter as commercial construction slumped.

CSX is scaling back some operations in response to declining coal shipments as power plants switch fuels, eliminating nearly 500 jobs in Corbin, Ky., and Erwin, Tenn. In the current quarter, the company plans to reduce its average head count by 2% from the third-quarter level.

U.S. manufacturing production rose in September at its slowest pace in more than two years, the Institute for Supply Management reported earlier this month. Economic activity at 11 industries tracked by the group contracted during the month, while just seven reported growth. Meantime, manufacturers told ISM that customer inventories remained high, contributing to a slowdown in new orders.

Some investors and analysts worry that companies accustomed to boosting earnings by cutting costs, repurchasing shares and refinancing debt will soon have to face the reality of worsening sales. “The ability of corporations to take a 1% to 2% revenue line [gain] and turn it into 5% to 6% profit growth is waning,” said Charlie Smith, chief investment officer of Fort Pitt Capital Group. “They’ve run out of rabbits to pull out.”

Still, cost-cutting continues. Companies from Twitter Inc. and Biogen Inc. to Wal-Mart Stores Inc. and Monsanto Co. have announced job cuts in recent weeks. That could boost the U.S. unemployment rate, which ended September at 5.1%, its lowest point since April 2008.

“Things are definitely a bit shakier than they were several months ago,” said Joseph LaVorgna, chief U.S. economist at Deutsche Bank. But, he added, “the U.S. is fundamentally in decent shape.”

Others worry that the slowdown is spreading to consumer businesses. Wal-Mart recently warned its sales this year are likely to be flat, down from projection of as much as 2% growth, and cut its earnings forecast for next year as it raises wages. The retailer blamed the strong dollar for the weakening sales growth.

And truckload carriers have warned that they aren’t witnessing the usual uptick in retailer demand as the holiday season approaches, thanks to stubbornly high inventories, said Alex Vecchio, a transportation analyst at Morgan Stanley. “Transportation companies are typically a leading indicator, and our data is not good,” Mr. Vecchio said.