Ukraine Hryvnia Down 17% in Two Weeks as Run on Banks Intensifies; 7% of Bank Deposits Withdrawn in 3 Days

Ukraine’s currency, the Hryvnia, has fallen nearly every day for two weeks straight. 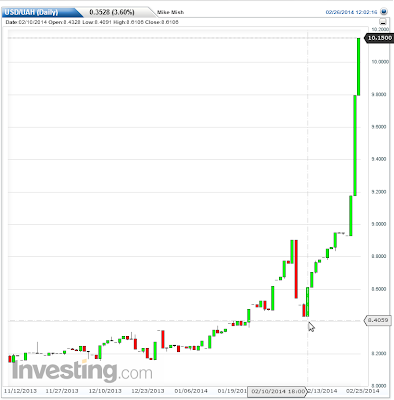 Ukraine has asked the International Monetary Fund to help prepare a new financial aid program, its central bank chairman said on Wednesday, adding that the new government would soon have its own anti-crisis program ready.

Stepan Kubiv [Ukraine’s new central bank head] told reporters the bank was taking measures to stop capital flight from Ukraine, which has spiraled since protesters took to the streets in November against President Viktor Yanukovich’s rejection of an EU trade deal.

7% of Bank Deposits Withdrawn in 3 Days

CNBC reports Risk of a Bank Run Heightens in Ukraine

Fears of a bank run in Ukraine are rising, as central bank reserves sink and some 7 percent of bank deposits were lost in just 3 days. 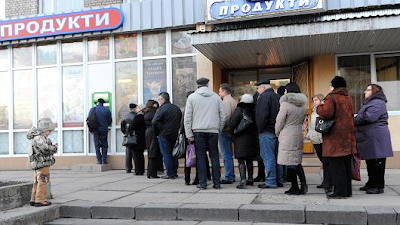 Ukraine’s reserves currently sit at $15 billion, according to the country’s newly appointed central bank governor, Stepan Kubiv. Kubiv said 7 percent of deposits, or 30 billion hryvnias ($3.3 billion), were lost between February 18-20, when the violence in the country reached its zenith and snipers opened fire on protesters.

Goldman Sachs has estimated the country’s foreign currency reserves have declined to $12 – $14 billion.

The slump also hit the Russian rouble, which hit a fresh five-year low versus the dollar.

The lead sentence in the above article is a bit curious. A run on Ukrainian banks has clearly started. The fear is not that a run starts, but rather that it does not soon stop.