Employers continue to ignore the signals sent by the recent stock market fracture. They are still hoarding their low cost labor forces at a record rate, exceeding that of any past bubble in history.

First time claims for unemployment compensation continued their string of record lows for the same week of the year. The actual number, not subject to any seasonal hocus pocus was 215,000 (rounded).  That was just 1,520 claims per million employed workers last week. That compares with 1,905 per million in the same week of 2007 just as the housing bubble was beginning to implode and 1,841 in that week of 2000 a few months after the internet bubble had begun to implode.

The record low is apparent on this chart.

We use actual data, as opposed to the seasonally manipulated headline numbers which Big Media shovels out for mass consumption. We need to see from the actual numbers if there’s any evidence of trend change. To do that we look at how the current week compares with the comparable week in prior years.

The actual change for the current week versus the prior week was a decline in claims of -3,800 (rounded). The 10 year average for actual data for that week was a decrease of -12,600. This year was worse than that average and worse than this week of 2014 which had a decline of -12,200. This is the second straight week where the performance was both weaker than the 10 year average and worse than last year. However, it’s still too early to say whether that hints at trend change.

Week to week changes are noisy. What matters is the trend. Since 2010 the annual change rate each week has mostly fluctuated between -5% and -15%. Last week was within that range with a year to year drop of -5.3%.

A shift to a year to year increase in claims would be a sign that the US economy could be headed for recession. Other than an occasional week here and there, that has yet to happen.

The stock market is a key. When it weakens, employers take their cues from that. The Fed knows that businesspeople watch the stock market and often base hiring and firing decisions on its direction. A weakening market would not only make the Fed even more cautious about attempting the charade of raising rates, it would at some point possibly  even put QE back on the table. In spite of all the evidence from Japan, Europe, and the US that QE does not stimulate real growth, and may even suppress it, central bankers continue to believe the economic mythology that it does.

In the meantime, businesses have acted out a job hoarding bubble in response to the signals from the Fed QE driven stock market bubble that has only recently begun to deflate. 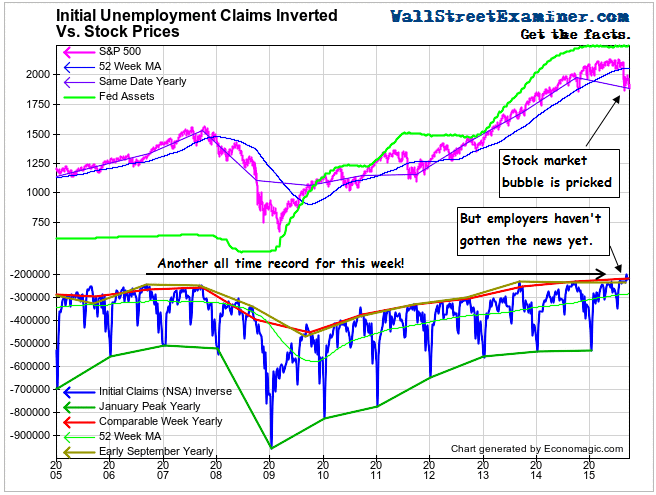 Real time Federal withholding tax data has been a bit weaker than the claims data. Withholding was weak in August but bounced back part way in September. The year to year growth rate, adjusted for wage inflation was +1.2% during the August payrolls survey reference week. It moved up to +1.6% in the September reference week and is currently slightly above +2%. That is slightly below the average growth rate of the past year. That signals that growth in the number of jobs, if not the quality of jobs, is continuing at slightly below the pace of the past 2 years.

The consensus Wall Street economist estimate for the jobs numbers for September is around 205,000, which is up from the initial headline print for August of 173,000. The withholding data doesn’t contradict that. That doesn’t mean that the seasonal adjustment and sampling errors won’t result in a number that surprises. It does mean that regardless of the headline, there’s little sign of material change in the employment trend. Slow growth continues as mostly low wage jobs are added to the economy.

I chart and analyze this data in the weekly Wall Street Examiner Pro Trader- Federal Revenues report. It has been an excellent predictor of where the final revised GDP estimate for each quarter would be. It currently shows a CPI adjusted growth rate of approximately 2% for the third quarter, suggesting that the final print for third quarter GDP will gravitate toward the +2% range. Given the vagaries of the seasonal adjustment process, the sampling error in the limited initial data, and the multiplier effect of annualizing the quarterly errors, the first number could be well above or below that. The third estimate usually hones in on what actually happened during the quarter. Therefore it was not surprising to see another upward revision in Q2 GDP. The withholding data had told us that all along.

By following the withholding tax growth rate, we should have a good handle on the reality of the US economy’s actual growth overall rate. Whether that’s helpful or not is questionable, since by the time the numbers are finalized they are ancient history. But it probably is helpful to know if the initial economic data releases are accurate.By tracking actual real time tax collection data we know whether it is or not.

In the Tale of Two Economies, massive gains accruing to the investor/speculator class skew the headline economic numbers positive while the bulk of the American people experience no gains. QE and ZIRP have caused Ben Bernanke’s trickle to pool at the top with the banker/speculator/investor/corporate looter crowd. Meanwhile, the vast majority of American families have seen their household income stagnate for more than a decade as QE and ZIRP create perverse economic incentives that work to their detriment. The ever increasing economic drag which that creates will eventually result in negative top line numbers, but we aren’t there yet. There are only faint hints in the latest data of movement in that direction.

Record low claims are the patina of policy success that hides the basic truth that most Americans are not doing well economically. These record numbers represent a bubble that was born out of and is joined at the hip with the financial engineering bubble that has been metastasizing in the US economy for a generation. We can thank central bank policy for the economic divide it has wrought and for the long term adjustment that lies ahead. The stock market faces the problem of reduced long term profitability that will ultimately result if most Americans can’t afford to buy the products and services that corporate America produces.

If you are new to these reports, here is a review of the key historical antecedents of the extreme readings on initial claims from a post, August 13, 2015.

The post Unemployment Claims Still Sailing Along At Record Lows, Withholding Taxes Down Slightly in Q3 appeared first on The Wall Street Examiner. Follow the money! See and understand the liquidity flowing from the Fed, Treasury, and other major central banks and primary dealers as they impact markets in the Wall Street Examiner Professional Edition.