We have a message to all of the Bernie Sanders supporters and those who are fixated on Scandinavia: give up your obsession of Sweden. It doesn’t do anything to further your case as there are a lot of downward trends transpiring in the nation of Ingmar Bergman films, Ikea products and meatballs (SEE: ‘Socialist Paradise’ Sweden suffering from swelling debt levels, employee absenteeism).

The main question that must be asked, however, is this: what the heck is happening in Sweden?

Sweden is on the cusp of being the very first nation in the world to conduct an economic experiment of this kind: negative interest rates in a cashless society. That’s right. The central planners are charging you to save your money in a bank, while eliminating the use of cash. You’re stuck if you’re living in the home of beautiful blondes and August Strindberg plays.

Last week, the Swedish central bank (Riksbank) announced that it would leave its benchmark interest rate unchanged at -0.35 percent, a rate that has been instituted since the summer. There were talks of Sweden going deep into negative rates, but it instead opted to go for another round of its own version of quantitative easing.

Financial institutions have yet to impose negative rates on Swedish consumers, but many economists do believe the central bank will keep this negative rate policy for a while. This means retail banks will have no other choice but to start implementing negative rates and passing the costs to its customers.

As renowned economist Walter Block opined in “Negative Interest Rate: Toward a Taxonomic Critique,” this is a tax. There is no other way about it.

“A basic principle of Austrian economics is that the originary rate of interest (the rate of discount of future goods compared to present, otherwise identical, goods) can never be negative. The reason for this arises not because capital is productive, nor out of man’s psychology. Nevertheless, in spite of the foregoing, there are many benighted souls who insist upon the possibility of a negative rate of originary interest. They are continually discovering cases which “prove” their conclusion. The number of such examples has reached such proportions that it seems advisable to take account of them in a systematic way. Accordingly, this paper is devoted to classifying them in a manner that makes the most intuitive sense: in accordance with the economic errors which are necessarily committed in their very statements.”

But what makes this Swedish case even more befuddling is the country’s shift into an electronic, cashless society. Remember, Credit Suisse even wrote that in this region of Europe “if you have to pay in cash, something is wrong.” Indeed! Banks call the police if you use too much cash because they peg you to be a criminal or a terrorist. Over the past year, Swedish banks started a push to remove ATM machines from rural areas. (Chart courtesy of Quartz.) 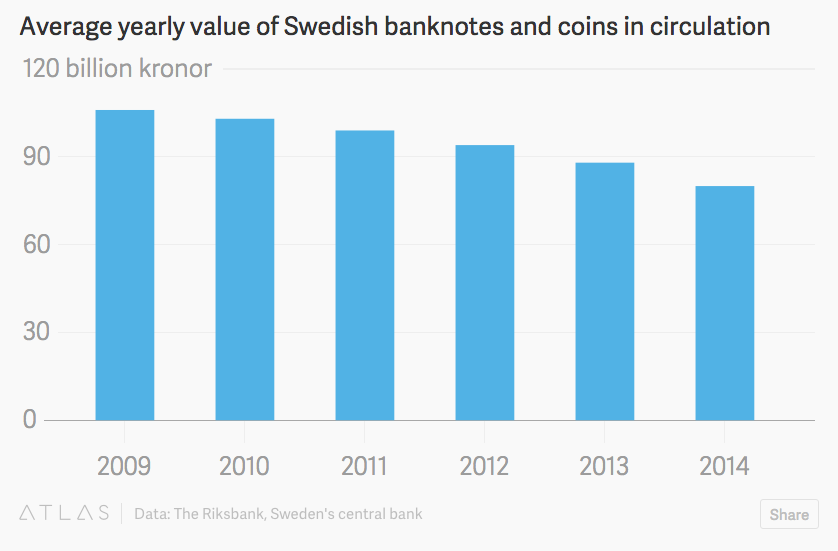 This spells bad news overall for Swedes. Since customers are unable to withdraw their money in cash to hide it from negative rates, banks can charge customers’ deposits. Unfortunately, Swedish customers are left with two options: spend it or allow the bank to take your dough.

Swedish authorities believe a negative rate policy will spur economic growth. This type of thinking is what has prompted the country to enter into a housing bubble and debt crisis.

Today, consumer debt is roughly 175 percent of disposable income, which is one of the highest rates on the continent. Meanwhile, housing prices continue to soar. A Stockholm apartment would cost more than $6,350 for every per square meter, which is similar to London.

Many fear that Sweden would have it own version of the global financial collapse a few years ago: millions of consumers left with mortgages they can’t afford and values that eventually disappear.

“We have scored an own goal of sorts in not dealing with the housing market properly in Sweden, and in the long term that threatens the economic development,” Riksbank Governor Stefan Ingves said in astatement.

In the end, if Swedes want to protect their money they will have no other alternative but to “hide” their money. This could come in all sorts of ways: paychecks in cash, working under the counter or simply putting any cash they may have under the mattress, in the microwave or in gold.

Yes, Sweden transformed from a state with impoverished peasants into a wealthy nation through the means of laissez faire capitalism. Unfortunately, through manipulation of markets, central planning, central bankers and a generous welfare state, Sweden’s “socialist paradise” stature may soon be the worst example for Democrats, liberals and those with Bernie Sanders crushes.

When banks won’t even accept your money then you know you have a problem.