US Economy Heads Toward Zero Growth in Q1

The consistency with which nearly every report on the US economy has deteriorated over the last few months is astonishing. Only the jobs report has been spared that sharp downdraft. So we blame the weather, which in parts of the US was truly atrocious, while in other parts, particularly in California, it was gorgeous.

Too gorgeous. This is supposed to be our rainy season, but every day the sun is out as we’re heading into our fourth year of drought. Yet the drought isn’t what keeps people from shopping or companies from ordering equipment. So out here, we’re baffled when the weather gets blamed.

Today’s durable goods report for February was another shot at this wobbly edifice of the US economy.

And Core Capital Goods New Orders, considered an important gauge of business spending, fell 1.4%, down for the sixth month in a row. The weather is really hard to blame for this, so folks blamed the strong dollar and slack demand in the US and globally.

The data was bad enough to push the Atlanta Fed’s GDPNow model of the US economy down another step toward zero growth in the first quarter.

The Atlanta Fed started the model in 2011 to offer a more immediate picture where the economy is headed. It takes into account economic data as released and adjusts its GDP forecast for the quarter as it goes. The model is volatile. It reacts to incoming monthly data that are themselves volatile and subject to sharp revisions. So a few strong releases for March could turn this thing around on a dime.

But we’re still dealing with the reality of January and February; the data has been crummy, and the Atlanta Fed’s “nowcast” is increasingly depicting an economy that is losing its struggle with growth.

When I wrote last about it on March 17, the GDPnow model pegged economic growth at a seasonally adjusted annual rate of 0.3%. That was bad enough. Today, after the release of the durable goods data, the nowcast dropped to 0.2%: 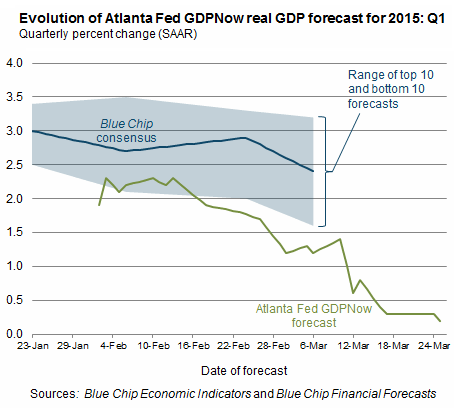 The blue area in the chart is the range of the “Blue Chip” consensus forecasts. Even the most pessimistic among these forecasters appear to be way too enthusiastic, though they’re also whittling down their exuberance.

In its last report, the Atlanta Fed mentioned drilling activity in the oil patch, as measured by the collapse in the rig count. This time around, it identified the lack of investment by the broader business community – the decline in “real equipment investment and real inventory investment” – as the main culprits. And it leaves GDPNow just a couple of lousy reports away from dipping into the negative.

And Wall Street’s promise of “Escape Velocity,” the miracle speed that the US economy would achieve in the near future to pull out of its sluggish orbit and move to the next level? That promise has been propagated for years. Each time, and with relentless regularity, it turned into just another false Wall-Street promise whose purpose it was to rationalize stock prices that have defied rationalization, and drive them even higher. And in doing so, the year-after-year promise of “Escape Velocity” has become a joke.

The Fed has floored the monetary accelerator with its steel-capped, lead-lined boot for over six years. Other central banks have followed. They expected, or pretended to expect, that it would create demand, economic activity, and consumer-price inflation. None of which happened. Instead, it created a “bond bubble” that is becoming “more extreme” and stock markets that are “overvalued,” according to 11,000 financial professionals. Read…  The “Insanity Trade:” Where Does It Go From Here?