US Freight Shipments Skid Below 2014 Level, Hit by the Slowdown in Industrial, Manufacturing & Construction

Freight shipments have declined on a year-over-year basis all year. Until today, the declines were from the extraordinary shipment boom that started in late 2017 and lasted into late 2018. It had been stimulated by efforts to frontrun the tariffs, where companies over-ordered to get the merchandise and equipment before the tariffs would hit. With today’s data, this image has changed for the worse. Freight shipment volume fell not only below the October 2018 level, but also below the October 2017 and October 2014 levels, which predate the tariff-frontrun era.: 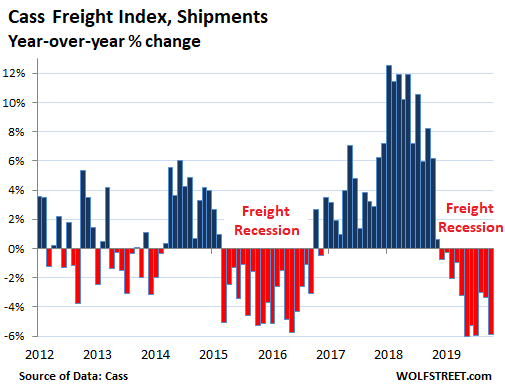