One month ago, when describing the latest in an endless series of Vancouver real estate horror stories, in this case an abandoned, rotting home (which is currently listed for a modest $7.2 million), we explained the simple money-laundering dynamic involving Chinese “investors” as follows.

We also explained that hundreds if not thousands of Vancouver houses, have become a part of the new normal Swiss bank account: “a store of wealth to Chinese investors eager to park “hot money” outside of their native country, and bidding up any Canadian real estate they could get their hands on.”

This realization has now fully filtered down to the local population, and as the National Post writes in its latest troubling look at the “dark side” of Vancouver’s real estate market, it cites wholesaler Amanda who says that “Vancouver seems to be evolving from a residential city into almost like a lockbox for money… but I have to live among the empty houses. I’m a resident, not just an investor.”

The Post article, however, is not about the use of Vancouver (or NYC, or SF, or London) real estate as the end target of China’s hot money outflows – by now most are aware what’s going on. It focuses, instead, on those who make the wholesale selling of Vancouver real estate to Chinese tycoons who are bidding up real estate in this western Canadian city to a point where virtually no domestic buyer can afford it, and specifically the job that unlicensed “wholesalers” do in spurring and accelerating what is currently the world’s biggest housing bubble.

A bubble which, the wholesalers themselves admit, will inevitably crash in spectacular fashion. 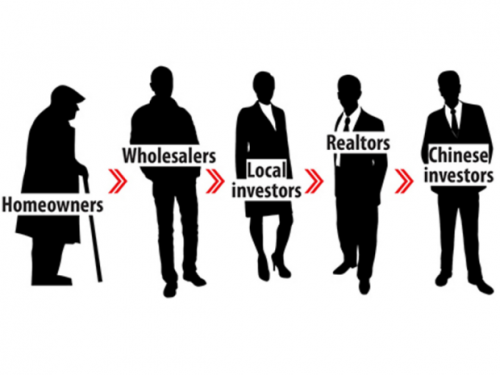 This is the of about Amanda, who was profiled yesterday in a National Post article showing how a “Former ‘wholesaler’ reveals hidden dark side of Vancouver’s red-hot real estate market.” Amanda quit her job allegely for moral reasons; we are confident 10 people promptly filled her shoes.

Vancouver’s real estate market has been very good to Amanda. She’s not a licensed realtor, but buying and selling property is her full-time job.

She started about eight years ago as an unlicensed “wholesaler” in Vancouver.

She would approach homeowners and make unsolicited offers for private cash deals. Amanda made a 10-per-cent fee on each purchase by immediately assigning the contract to a background investor. It is seen as the lowest job in property investment, but it is low risk and very profitable. Amanda has done so well that she now owns two homes in Vancouver and develops property in the U.S.

Unlicensed wholesaling is an illicit and predatory business that is quickly growing in Metro Vancouver because enforcement is virtually non-existent.

It’s similar to a tactic currently being examined by B.C. real estate authorities known as “assignment flipping,” which involves legally but secretly trading homes on paper to enrich realtors and circles of investors.

However, unlicensed wholesaling is completely unregulated. Amanda estimates hundreds of wholesalers are scouring Metro Vancouver’s never-hotter speculative market — not including the realtors who are secretly wholesaling for themselves.

Amanda decided to step away from the easy money for moral reasons.

She’s most concerned that wholesalers are targeting B.C.’s vulnerable seniors who don’t understand the value of their old homes. She is also worried about offshore money being laundered, and the resulting vacant homes.

Because wholesalers are unlicensed, they have no obligation to identify their background investors or reveal the source of funds to Canadian authorities who fight money laundering.

“Vancouver seems to be evolving from a residential city into almost like a lockbox for money,” Amanda said. “But I have to live among the empty houses. I’m a resident, not just an investor.”

Amanda said she believes that unethical and ignorant investors are driving B.C.’s housing market at full speed towards a crash. For these reasons, and with the condition that we not use her real name, she came forward to reveal how wholesalers operate.

The calling cards of wholesalers — hand-written flyers offering homeowners “confidential” and “discreet” cash sales — started flooding westside Vancouver homes over the past 18 months. With the dramatic surge in home prices, wholesalers now are spreading into neighbourhoods across Metro Vancouver and Vancouver Island.

In eight years Amanda has never seen the market hotter than it is right now, and her colleagues are urging her to start wholesaling again. 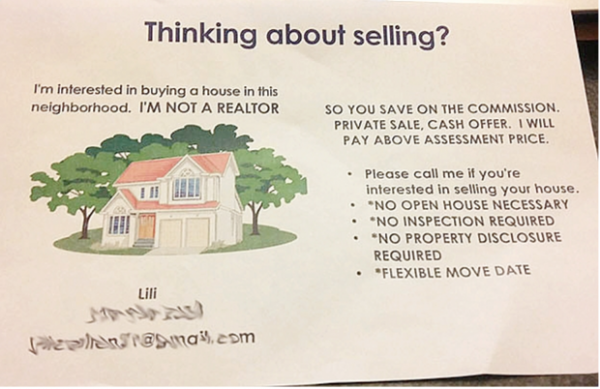 “A lot of money is leaving China, so now every second day people are asking if I can go out and find places for them. They have tons of money,” Amanda said. “They are basically brokering business deals specifically for Chinese investors.”

She said the mechanics of wholesaling schemes work like this:

The investor behind the unlicensed broker targets a block, often with older homes, and gives the wholesaler cash in a legal trust.

The wholesaler persuades a homeowner to sell, offering immediate cash, no subjects, no home inspections, and savings on realtor fees.

While the wholesaler claims to represent one buyer, or in some cases to be the buyer, Amanda said three or four contract flippers are often already lined up, with an end-buyer from China who will eventually take title in most cases. These unlicensed broker deals appear to be illegal.

A veteran Vancouver realtor confirmed these types of deals. The realtors we spoke to have been asked by their brokerages not to comment to reporters, so we agreed to withhold their names.

“I work with some non-licensed flippers,” one said. “They walk on to the lawn of an older house, see the owner and yell, ‘We’re not realtors!’ The owner invites them in, thinks they’re saving a commission — which they are — and loses big-time on the actual sale. I’ve seen it first-hand.”

According to flyers obtained from across Metro Vancouver and interviews with homeowners who were solicited, wholesalers often say they have Chinese buyers willing to pay a premium for quick sales.

One resident of Vancouver’s west side Dunbar area said she was annoyed by wholesalers constantly soliciting her, and a man in Surrey said his elderly mother was bothered by wholesalers.

“A guy walked up and he offered $700,000 cash within a day, and he said I would save on the realtor fees,” said Zack Flegel, who lives near 119th Street and Scott Road in Delta.

“He also says he will give me $100,000 cash and move me into a $600,000 house. He said he has a bunch of properties. He was talking about my house like it was a trading card. We don’t have abandoned homes yet like Vancouver, but this is how it happens, right?”

After the offer is accepted, the wholesaler assigns the purchase contract to the investor for a 10-per-cent markup, Amanda said. But some wholesalers aren’t content with making $100,000 or more per sale.

“And you are socializing with other wholesalers, and it is hard to hear them say, ‘Oh this whole street is filled with seniors whose partners are dropping off like flies.’ Or, ‘They just want to get rid of it, they have no clue what their house is worth, and it’s the whole street.’”

Amanda said her father died recently. She pictured her mother being targeted by wholesalers and resolved never to play that role again.

“There are elements of this that are elder abuse, absolutely.”

In a recent story that deals with implications of rising property taxes rather than predatory real estate practices, the Financial Post reported that, especially in Vancouver and Toronto’s scorching markets, “it’s not uncommon for some Canadian seniors to be unaware of the value of their location.”

“We would welcome an opportunity to speak to (Amanda) and assuming she gives us the same information, we would open a file,” Rogers said. “The conditions in the Vancouver market right now present risks … and seniors could be an example of that.”

It is illegal for wholesalers to privately buy and sell property for investors without a licence, Rogers said. She said her officers have approached some wholesalers recently and asked them to become licensed or cease their activities.

A review of the superintendent’s website shows no enforcement orders, fines or consumer alerts filed in connection to unlicensed wholesalers making cash deals and flipping contracts.

Amanda said that over the past year she learned of new levels of “layering and complexity that I didn’t see five years ago” in wholesaling and assignment-clause flipping.

“Five years ago I didn’t see realtors wholesaling, and I didn’t see people calling me so that I would get them a property and not assign the property to them, but work as a ‘partner’ and I would attach a 10-per-cent fee.

Amanda said some wholesale deals involve only unlicensed brokers and pools of offshore cash organized informally, and some appear to involve realtors and brokerages hiding behind unlicensed wholesalers.

“I’ve seen it from the back end. We have friends in the British Properties and the realtor said he will buy their property for $2 million. And then six months later it was sold for $3.5 million. When I’m looking at that, it is a pretty clear wholesale deal.”

Darren Gibb, spokesman for Canada’s anti-money-laundering agency, FINTRAC, confirmed that unlicensed property buyers have no obligation to report the identity or sources of funds of the buyers they represent.

However, Gibb said, if realtors are involved in “assignment flipping” it is mandatory that they and unlicensed assistants make efforts to identify every assignment-clause buyer and their sources of funds.

Vancouver realtors confirmed that money laundering is a big concern in assignment-flipping deals, whether organized by an unlicensed wholesaler or a realtor.

“When you are a non-realtor broker you no longer have to play by any rules,” one Vancouver realtor said.

“There is a role for assignments, but nobody is asking where the money came from. We are creating vehicles for money laundering.”

NDP MLA David Eby and Green MLA Andrew Weaver commented that allegations of unlicensed brokers targeting seniors and participating in potential money-laundering schemes call for direct action from Victoria and independent investigation, because these concerns fall outside the jurisdiction of the B.C. Real Estate Council and its current ongoing review of real estate practices.

“It is very troubling to me,” Eby said, “that not only do we have a layer of real estate agents that are acting improperly and violating the rules, but there might be this additional layer who are not bound by any rule and have explicitly avoided becoming agents for that reason.

“This unscrupulous behaviour is targeting seniors who need money for retirement. What kind of society is that?” Weaver said.

Source: How Vancouver is being Sold to the Chinese: Illegal Dark side behind the Real Estate bubble – ZeroHedge