Rupert Murdoch’s News Corp. owns the Wall Street Journal and the housing marketing service Move Inc. Move Inc.’s main client is the National Association of Realtors. In sisterhood with Move, the newspaper is prone to printing outright, bald-faced lies about the state of the housing market in the US, whenever it thinks it can get away with it. And since nobody is paying attention, it gets away with it.

Yesterday it printed another whopper on the subject of the NAR’s “existing home sales” print for May. The Journal said, “Sales last month hit their strongest pace since November 2009.” That’s simply false. I’ll get to that in a minute.

Aside from the fact that the Journal reported a figure which was false, this isn’t actually sales data. It’s the number of sales that were settled that month. The sales took place a month or two earlier. This is like if retailers reported sales when customers paid their credit card bills a month or two after the actual purchase. Like all retailers, the monumentally monolithic NAR cartel has the actual data on the closing of the contracts at the time they occur, but it refuses to report it.

The national online real estate brokerage Redfin gives us the facts by reporting contract agreements (which the NAR calls “pending home sales”) for 58 US metros a few weeks after the fact, using the NAR’s MLS databases. This data showed that sales rose 3.1% year over year in May. That compares with the NAR’s reported 9.2% gain in May year over year sales using a grossly faulty seasonal adjustment factor. The NAR’s actual data, not seasonally adjusted, on closings (“existing home sales”) showed that the year to year gain was 5.1%. Even though that may have been the correct figure for closings, Redfin’s data for contracts signed in May at +3.1% shows that the market appreciably slowed since NARs reported “sales” were contracted in March and April.

April may have been when the housing market reached peak momentum. Mortgage rates were near their lowest levels in 2 years in March and April. Since then mortgage rates have spiked.

The biggest problem may be with the statement, which WSJ made up, that sales had reached their “strongest pace” since November 2009. Considering just the NAR’s actual, not seasonally finagled data, there were 497,000 “sales” in May. In May of 2013 there were 514,000 sales. In fact, in every month this year except February when mortgage rates were at their lowest point, existing home sales were below the same month’s levels in 2013.

In fairness to the NAR and the Journal, which actively promotes its affiliated housing business via the newspaper, April contracts were at the highest level since the recovery. That brings up another problem. Since May closings did not keep pace with April’s contracts, contract fallout increased and the ratio of closed sales to prior contracts fell to 93.2%, the lowest level since 2012. That broke an improving trend that had been under way since the bottom of the housing crash. 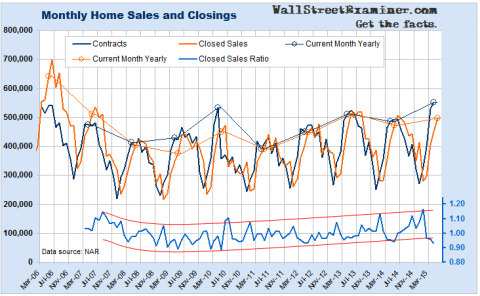 Is that a canary in the coal mine? It’s logical that there would be some sensitivity between contract failures and rising mortgage rates. Most buyers in the housing market are on the bubble to begin with. They simply cannot afford higher rates at these price levels. Something has to give. If mortgage rates rise from here, will it be sales volume, or house price inflation (now around 8%), or both?

Meanwhile, the Wall Street Journal pretends to be an unbiased news organization as it continues to report NAR data while acting as a PR firm for its sister company, MOVE Inc. It’s an outrage. But other paid observers (formerly known as journalists or reporters) continue to sleepwalk through this data every month too. All of the mainstream media organizations and their employed lackeys are on the take from the housing industry. They cannot, and will not, report the data without gross bias.