By Sam Ro at Yahoo

The stock market (^GSPC) has now been in a bull market for seven years.

And much of this rally is owed to the rebound in profits, which is arguably the most important long-term driver of stock prices.

But what if corporate profits right now aren’t as strong as companies are telling us?

Currently, profits as measured by standardized accounting principles are much lower than the profits executives are spouting to their investors. And it has billionaire investors and Wall Street strategists wrestling with the possibility that the much of the profit growth we’ve seen is actually just an illusion.

When accounting for business, CFOs are guided by a standard known as generally accepted accounting principles, or GAAP. GAAP represents an attempt to promote uniformity in how companies report their financial performance.

But income statements reported based on GAAP don’t always do a good job of reflecting the ongoing performance of a company’s underlying operations.

“The main bone of contention is over the effects of write-downs primarily following acquisitions, restructurings or valuation impairment, particularly for goodwill,” Jefferies’ Sean Darby said on Wednesday.

These actions usually come with large one-time costs that distort company profits and misrepresent long-term profitability. And so, a company will also provide an adjusted, or non-GAAP earnings number that excludes what are arguably non-recurring items.

“Excluding these items, which are true and potentially recurring costs, results in a tendency for [non-GAAP] EPS to overstate ‘true’ earnings,” Bank of America Merrill Lynch’s Dan Suzuki said in a March 1 note to clients. “But on the other hand, including lumpy costs can make it more difficult to assess the underlying earnings potential.”

Indeed, this is a debate dominated by a lof of “on the one hand … but on the other hand” type of language.

“Analysts will argue that the differences will tend to fluctuate through the economic cycle and a smoothed approach is valid, while purists will complain that companies tend to ‘kitchen sink’ or recognize losses at the nadir or lowest point,” Darby said.

The “GAAP gap” hasn’t been this wide since the crisis

Wall Street gurus like Societe Generale’s Andrew Lapthorne, have been tracking the discrepancy between GAAP and non-GAAP reported profits for years.

But last fall, more experts like Deutsche Bank’s David Bianco grew increasingly concerned with what was becoming a growing divide between GAAP and non-GAAP profits. 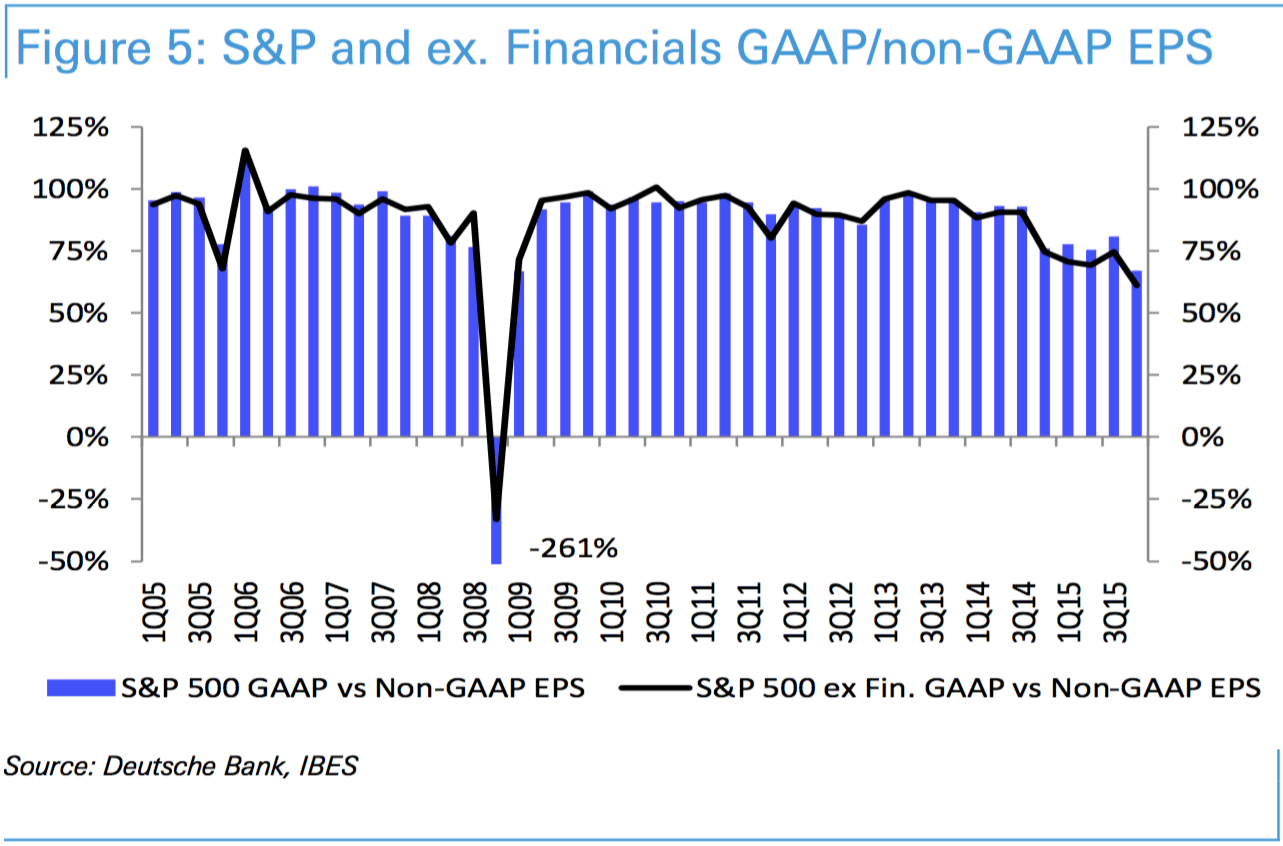 “The gap between GAAP and adjusted [non-GAAP] EPS is the widest since the crisis,” Bank of America Merrill Lynch’s Dan Suzuki said in a March 1 note to clients. “The causes have varied, but the biggest recent contributors have been asset impairment charges and write-downs within the commodity complex, and acquisition charges (many of which are in Health Care).”

“A widening “GAAP gap” is not a leading indicator for a market downturn, but rather more of a coincident measure,” Suzuki continued.

Everyone from Warren Buffett to Carl Icahn warn

“The earnings they are putting out today, I think, they are very suspect,” billionaire investor Carl Icahn said. “You haven’t really increased earnings for three years. GAAP earnings [for the S&P 500] have stayed at around $100 a share for three years.”

Ultimately, it comes down to whether it’s indeed fair for managers to exclude certain items when reporting profits. The problem, of course, arises when what’s excluded actually is reflective of an ongoing issue in a company’s operations.

“[I]t has become common for managers to tell their owners to ignore certain expense items that are all too real,” Warren Buffett warned in his recent letter to Berkshire Hathaway shareholders.

Employing financial sleight of hand to create an illusion of profits is not a sustainable strategy.

Source: Wall Street is Wrestling with the Possibility that Stocks are being Propped up by an Illusion of Profits – Yahoo