Wall Street, Retail Sales, and Consumer Surveys, The Dogs Are Chasing Their “Tales”

The Wall Street Journal took note of the decline in retail sales reported by the US Census Bureau last week, headlining:

The Journal blamed drops in spending at gas stations and auto dealerships.

Their lead paragraph was emblematic of the stupidity and misleading nature of Wall Street and economic conventional wisdom.

Exactly how did the Journal know that consumer “optimism” was strong?

Answer: Surveys… particularly the University of Michigan Consumer Sentiment Index, and the Conference Board’s Consumer Confidence Index, also known as the Con Con Con Index. The real function of these surveys is to measure how well they have learned the lessons Wall Street has taught survey respondents. Consumers report not whether they have the wherewithal to spend or not. Instead, they report what they think they should say, based on the stock market.

This is where the dog chases its tail. The dog is the Wall Street media. The tail is the consumers who wittingly or unwittingly tell the Con ConCon survey takers little white lies about they think of present economic conditions, and what their expectations are for the future.

Wait a minute. The economists at the Con Board and U Mich can’t forecast the future. Even the Fed Almighty can’t accurately forecast the future.  And the stock market appears to constantly overstate how good things are, and how good they’re going to be. Yet these economic sages think that asking consumers what their expectations are about the economy in the future serves some useful purpose, like predicting whether consumers will spend or not.

Then the dog, the Wall Street media, gets into the act of chasing its “tale.” It reports with great consternation that retail sales were down DESPITE consumer optimism. I can just see the fin journo crowd scratching its collective heads over that one, as they groom each other and pick the nits out of each other’s fur in their echo chambers.

The media and the economism high priests all assume that retail sales should reflect the stories that consumers tell survey takers.  But all those consumers are actually doing  are giving the pollsters a stock market report. “Oh the stock market made new highs. The stock market discounts the future [not really] therefore I should tell this nice pollster that things are good now, and just wait, they’re going to be even better in the future. In other cases the respondents are simply pulling the pollster’s leg.

Notice in the chart below how the Con Con’s Expectations Index surged following the market’s big move up to new highs last month. There was no reason whatsoever economically for consumers to feel that much more confident about the future. They were just following the stock market.

The Con Board aggregates the two indexes into its the Total Index, which is the one the media focuses on. Doug Short of Advisor Perspectives keeps a chart on that dating from the 1970s. It has broken out above the housing bubble peak, but not the peak of the internet/tech bubble. His chart shows that the increase in confidence is not consistent with economic growth as measured by GDP growth, which has been trending lower since the 1980s. 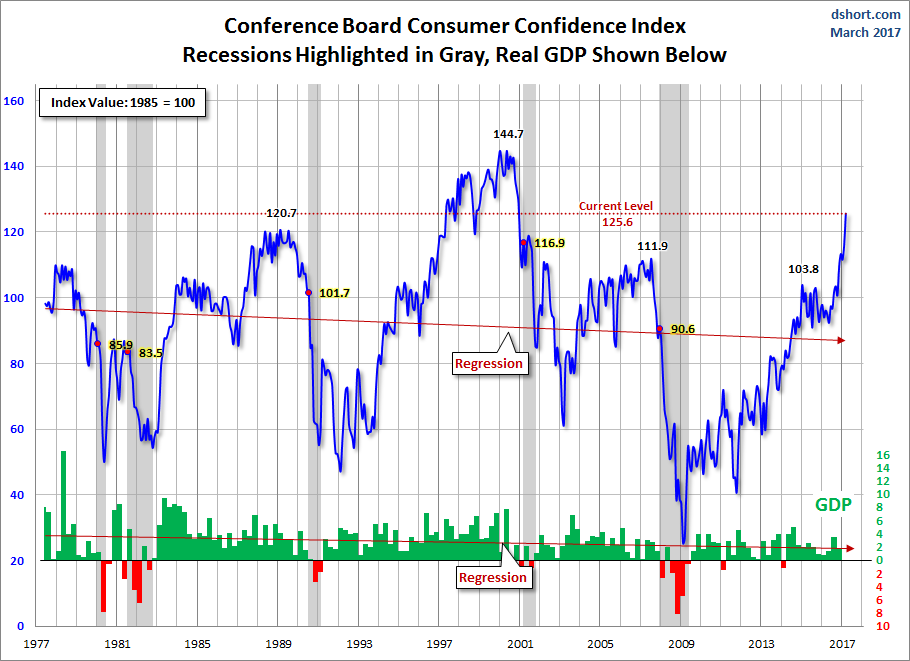 What’s really inconsistent with the surge in the Total Consumer Confidence Index is the fact that real median household income is LOWER than it was at the peak of the housing bubble. So why are consumers reporting that things seem better to them? Because they are following the stock market and reporting what they have learned they are supposed to say. They are not reporting how they really think and feel, and more importantly, how they are behaving.

For that data, we don’t need to survey them. We need only look at retail sales. They are facts. The headlines and media obfuscates those facts, but if we dig just a bit below the surface, the facts become clear.  We’ll take a look at those facts and what they tell us about about the real state of consumer confidence and what it tells us about the future in our next report.

Just remember the next time you see news about consumer confidence or sentiment, it’s really a report about dogs chasing their “tales.” Consumers aren’t responding to the economy. They are merely reflecting what they see in the stock market. Because economists, Wall Street PR machines, and their media handmaidens have taught people to believe that the stock market reflects and predicts the economy. It doesn’t do either, and neither do Consumer surveys.

The hard data speaks for itself. The economic “recovery” has been slow and tortured. The gains have been concentrated at the top of the wealth and income spectrum. Unlike consumer surveys, weak retail sales don’t lie. The majority of workers and consumers have not participated in the gains, have not seen their standard of living improve.