By MATT JARZEMSKY and MATT WIRZ at The Wall Street Journal

It is shaping up as a cruel summer for debt investors wagering on a rebound in the oil-and-gas business.

Funds managed by Franklin Resources Inc., Blackstone Group LP and Oaktree Capital Group LLC, among others, are facing paper losses on substantial investments this year in exploration-and-production companies. The sector is coming under further pressure as oil prices have turned downward again, dropping below $46 a barrel in New York to a four-month low.

Many of the investments amounted to a doubling down on existing stakes, as the firms committed hundreds of millions of dollars to lend to or invest in energy companies whose debt they already held. Among those gaining access to much needed cash: Warren Resources Inc., Goodrich Petroleum Co. and Energy XXI Ltd.

The investments still may hold advantages for the funds, despite the sharp declines in oil-related securities in July. The deals generally were struck at terms advantageous to the funds, including giving some preferred treatment in any restructuring, reflecting the intense cash squeeze on many oil producers late last year. The investments appeared well timed earlier this year, when oil prices rebounded as much as 30% after a deep decline in 2014.

July’s commodity tumble—front-month crude futures fell 21% last month and another 4.1% Monday, to $45.17 a barrel—has extended the pain already felt around the sector.Exxon Mobil Corp. and Chevron Corp. said Friday they are both cutting stock-buyback programs, while Linn Energy LLC said last week it would stop making dividend-like payments to shareholders. A handful of small oil-and-natural gas producers have filed for chapter 11 bankruptcy protection this year.

The pain is just one example of how oil’s plunge is rippling through the sector.

“Companies that did these deals, for the most part, had excessive leverage to begin with,” said Joshua Gale, an analyst at brokerage GMP Securities LLC. “So investors have done poorly” as prices have resumed falling.

Since the selloff in oil, 19 stressed or distressed U.S. E&P companies have announced debt sales, though not all of those have closed, according to Mr. Gale.

In the largest such offering, Energy XXI Ltd., which drills in high-cost oil fields, turned to bondholders including Franklin and Oaktree to make sure a $1.45 billion March debt offering succeeded, people familiar with the sale said. Funds that already owned Energy XXI bonds agreed to buy about half of the new debt before it was issued, one of the people added. 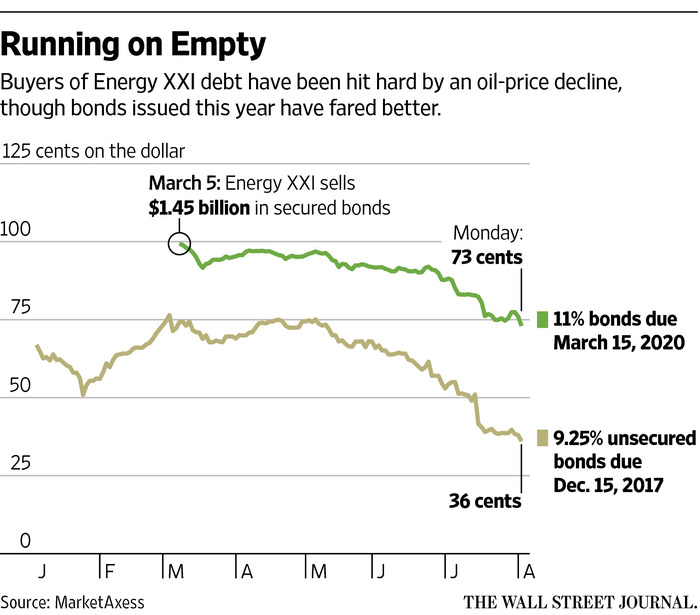 To be sure, the debt could yet recover, and Franklin and Oaktree’s new senior creditor position could help protect it should Energy XXI’s situation deteriorate if oil prices fall further. Energy XXI spokesmen didn’t respond to requests for comment.

“In some instances, we expect the process to be lengthy and may result in reorganizations, but that doesn’t mean that our returns won’t be attractive,” says Ed Perks, portfolio manager ofFranklin Income Fund.

Oaktree co-founder Bruce Karsh reminded investors on a conference call last week that many of the firm’s most profitable distressed-debt investments,particularly those in cyclical industries that are highly dependent on the broader economic environment,“have shown mark-to-market losses early in their lives.”

Oil-and-gas producer Goodrich Petroleum agreed to a bondholder infusion in February. The company issued $100 million in new secured bonds to a Franklin Resources fund with an option to borrow an additional $75 million. A separate Franklin fund held $67 million of Goodrich’s unsecured bonds as of Dec. 31, according to data firm Ipreo. The unsecured bonds jumped to 50 cents on the dollar in the days after the deal was announced, from 37 cents before it, but they now trade around 30 cents.

In May, Warren Resources Inc. agreed to take $250 million in financing from GSO, Blackstone’s credit arm. The funds provided $203 million of new debt capital and swapped $47 million of their bonds for new senior loans.

Many fund managers are feeling pressure to keep oil-and-gas companies afloat because they account for a much larger part of their portfolios than in years past, analysts said. Energy companies accounted for 15% of all junk bonds sold since 2009, up from 8% in the previous decade, according to Dealogic, reflecting a boom in natural-gas exploration that is now flagging.

Stressed exploration-and-production companies “won’t be able to get some of the deals that were done in May done in today’s market,” said Shaia Hosseinzadeh, head of energy and natural resources at investment firm WL Ross & Co., which has been buying the debt of oil-and-gas firms. “The terms have changed, the prices have changed, and there will be some issuers for which there will be no bid.”