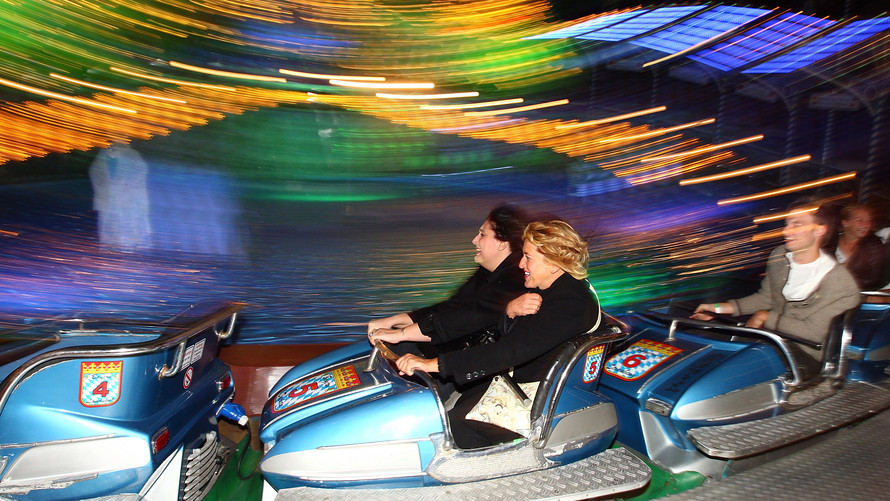 Getty ImageVolatility is baack!
So much for the those calm markets. Wall Street’s “fear gauge” is rearing higher as U.S. equities logged a second sharp selloff in the past three sessions, as hand-wringing over central-bank monetary policy contributes to a renaissance of volatility.

The CBOE Volatility Index VIX, -8.16% often used as a measure of fear in the market, rose 18% on Tuesday at 17.85—its highest level since June 28 and implying that investors are starting to dial up bets that stocks could suffer further near-term swings turbulent.

The VIX has hovered around 12 since mid-July. That level usually signals quiescence, while a reading of 20 or above indicates that investors are bracing for moves sharply south

The rise in the VIX comes as the Dow Jones Industrial Average DJIA, +0.66% and the S&P 500 index SPX, +0.65% and the Nasdaq Composite Index COMP, +1.06% relinquished all of the sharp gains racked up 24 hours ago. Monday’s rally followed another tumble on Friday that saw the VIX jump 40%—the largest daily move since the U.K.’s vote to secede from the European Union on June 23.

On Tuesday, volume in an exchange-traded fund that tracks the VIX, Barclays Bank PLC iPath S&P 500 VIX Short-Term Futures ETN VXX, -2.62% exceeded that of stocks on the S&P 500 for the first time ever, as Bloomberg highlights: 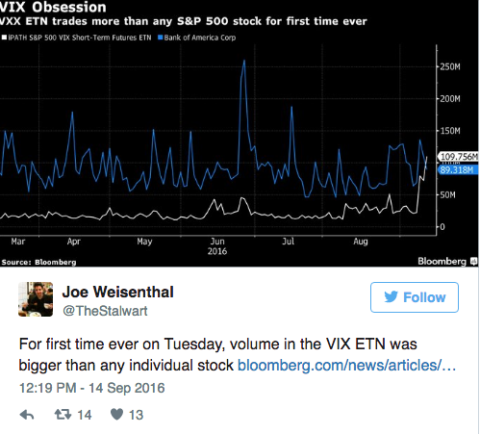 On Wednesday, the VIX ticked higher as the Dow and S&P 500 lost momentum to trade lower late in the session.

Three straight days of swings of at least 1% for stocks, marks the first time since 1963 that the S&P 500 followed an extended period of calm—43 days—with a trio of such choppy trading days, according to Dow Jones data. That was the two-day period before and immediately following the assassination of President John F. Kennedy in November 1963, Dow Jones data show.

“Downdrafts in the SPX are associated with upmoves in the VIX, and I don’t think either move has come to its culmination yet. Volatility tends to follow periods of complacency, which you could argue was the case in August,” she said. Stockton thinks that the VIX could get to 28 before it reaches a tradable low.

In other words, there may be more pain ahead for equities before it gets better.

Salil Mehta, a graduate-school finance professor, who has worked at Georgetown University and New York University, said he expects volatility to pick up in sectors like tech, which had enjoyed a pop during the market’s dormant phase. “The selloff in recent days hasn’t yet impacted technology as much and so I think that is where there is still room for stock prices in that sector to plunge down,” he said.

Much of the volatility is centered on the outlook for interest-rate hikes ahead of the Federal Reserve’s two-day policy meeting set for Sept. 20-21. But some investors have cited worries about the presidential election, which could have significant implications on markets and the global economy.

And, bond prices also are falling along with stocks, which is unusual because fixed-income securities like U.S. Treasurys are typically considered so-called haven assets and tend to draw bidders when stocks tumble. But intensifying worry that government bonds, like the benchmark 10-year Treasury TMUBMUSD10Y, +0.88% have become a crowded trade, as hedge-fund manager Paul Singer of Elliott Management warned on Tuesday at a conference in New York, has led to some unwind of bonds, and elevated yields. Bond prices and yields move in the opposite direction.

The tandem selloff of stocks and bonds has the potential to hurt a particular kind of investment strategy known as risk-parity investing, in which an investors purchase stocks and use leverage in low-volatility, haven assets, like Treasurys, to achieve returns better than benchmarks like the S&P 500.

In any case, some have made the argument that the market has been spoiled by the episode of protracted torpor, while others view the surge in the VIX as necessary for the market to make a further assault on record highs.

“I think this volatility is necessary. When the market gets too complacent, you need to have a little scare to get it to recycle,” said Asbury Research’s chief market strategist, John Kosar.

Source: Wall Street’s ‘fear gauge’ shows it’s about to get wild in the stock market