One week ago, in the aftermath of Japan joining the NIRP club, we wondered how low Kuroda could cut rates if he was so inclined. The answer was surprising: according to a Nomura analysis the lower bound was limited by gold storage costs. This is what the Japanese bank, whose profit was recently slammed by Japan’s ultra low rates, said: 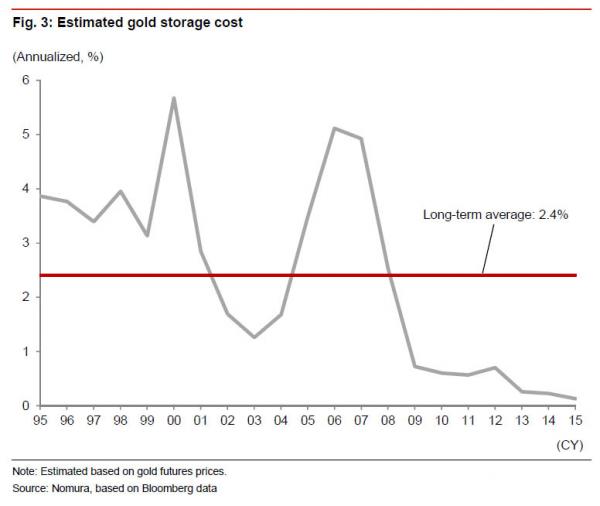 Which, in conjunction with Kuroda’s promises that “Japan will cut negative rates further if needed”, raised flags: once the global race to debase accelerates, and every other NIRP bank joins in, will global rates be ultimately cut so low as to make a “gold standard” an implicit alternative to a world drowning in NIRP?

According to a just released report by JPMorgan, the answer is even scarier. In the analysis published late on Tuesday by JPM’s Malcolm Barr and Bruce Kasman, negative rates could go far lower than not only prevailing negative rates, but well below gold storage costs as well.

JPM justifies this by suggesting that the solution to a NIRP world where bank net interest margins are crushed by subzero rates, is a tiered system as already deployed by the Bank of Japan and in some places of Europe, whereby only a portion of reserves are subjected to negative rates.

Which leads to the shocker: JPM estimates that if the ECB just focused on reserves equivalent to 2% of gross domestic product it could slice the rate it charges on bank deposits to -4.5%. Alternatively, if the ECB were to concentrate on 25% of reserves, it would be able to cut as low as -4.64%.  That compares with minus 0.3% today and the minus 0.7% JPMorgan says it could reach by the middle of this year as reported yesterday.

As Bloomberg adds, easing the fall is that the JPMorgan economists bet that banks are unlikely to be able to pass on the cost of the policy to borrowers, reducing potential repercussions. They also see limited pressure on bank profits or for a need to stash cash. On the other hand, DB has suggested that it is time to pass on NIRP to depositors in the most aggressive forms possible.

While Barr and Kasman still expect policy makers to tread carefully, such analysis may temper the recent fear of investors that after seven years of interest rates around zero and bumper bond-buying, central banks are now out of ammunition. Indeed, a fuller embrace of negative rates could “produce significant reductions in market rates,” said the economists.

“It appears to us there is a lot of room for central banks to probe how low rates can go,” they said. “While there are substantial constraints on policymakers, we believe it would be a mistake to underestimate their capacity to act and innovate.”

Here are the key observations by JPM:

Recall that JPM yesterday set the bogey on the one event that could prompt Yellen to go NIRP: a recession. Here is the latest take by JPMorgan on this:

With IOER at 0.5% and the Fed maintaining concerns about US money markets, the US is not close to considering NIRP. However, if recession risks were realized, the need for substantial additional policy support would likely push the Fed towards NIRP.

In other words, once the Fed makes up its mind, all that will be needed is for economic “data” to turn even more severely southward thus giving Yelen the required political cover to join the final lap of the global race to debase.

Finally, here is the summary table of where to look for the real negative lower bound. 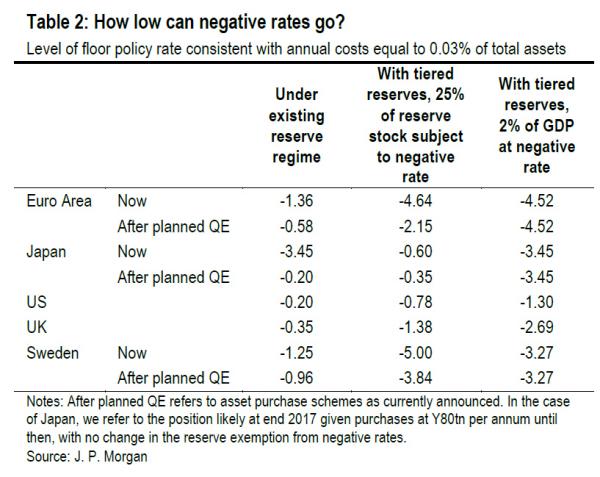