Warning: The ‘Stealth Bear Market’ is About To Show its Teeth

By Victor Reklaitis at MarketWatch

The new year is beginning with a mauling for many investors, as Chinese stocks fell so sharply Monday that they triggered a trading halt.

Following China’s lead, Dow futures have wallowed more than 300 points in the red. “Investors are not going to like the start of this year,” says Naeem Aslam, AvaTrade’s chief market strategist, in a note.

The new year brings a “possibility that the ‘stealth bear market’ we have been in for 6-9 months is revealed as a true bear market,” says Jonathan Krinsky at MKM Partners in a note.

In a note offering key numbers for the new year, Wald also sees WTI crude finding support at $32 a barrel.

But getting back to today’s bearish action, the chart of the day shows just how ugly that drop in China was. Analysts found plenty of culprits for the plunge: soft Chinese manufacturing data, a weakening yuan, the new circuit-breaker system for Chinese stocks and the upcoming end of a ban on share sales by major holders.

2015 was all about “a very small number of stocks” having a great year, while the majority had a very poor year,” says MKM’s Krinsky in his note out Sunday. He says this was “often referred to as the ‘Stealth Bear Market.’”

He highlights the Value Line Geometric Index, an equal-weighted gauge tracking about 1,700 stocks. “This index is down nearly 15% from its 52-week high made in April 2015,” writes Krinsky, who offers the chart below showing that Value Line benchmark. “Note how poor the rally was off the August lows, and the index is now just 3% above those respective lows.”

So no wonder he summarizes his outlook for 2016 with “The stealth bear is revealed.” Where to hide from that bear? Krinsky advises going overweight on tech stocks XLK, -1.98% , consumer staples XLP, -1.74% and utilities XLU, -0.62% — and he’s bullish on sugar and cocoa, too. 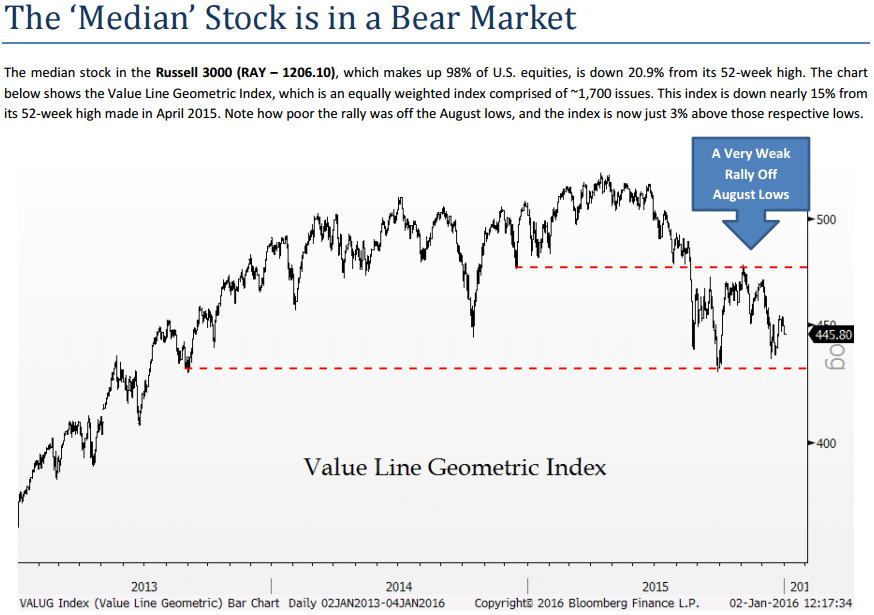 Source: Warning: The ‘Stealth Bear Market’ is about to show its teeth – MarketWatch